Whale of a weekend 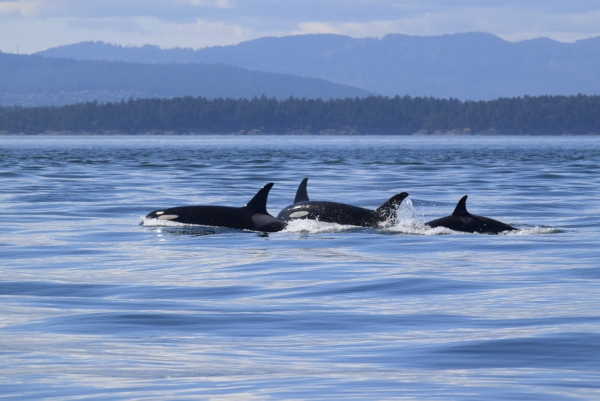 People told me I was crazy for taking off to Canada for all of two days, and maybe they were right. But when a killer whale breached right next to the boat I was on — jumping out of the water and flashing its black and white belly — I didn’t feel crazy. I just felt lucky.

Until Labor Day weekend, I’d never been to Canada. I’d flown halfway around the world, but never stopped to check in on my northern neighbor. As luck would have it, a good friend of mine recently moved to Vancouver, B.C. Instead of being on a different continent, he was now just on the other side of this one — practically in my backyard, by comparison.

But with just three vacation days to get me through 2016, I knew the trip would have to be short, and I’d have to plan it carefully. Which is how I ended up in the Charlotte-Douglas International Airport at 8 a.m. the Friday before Labor Day. I’d arrive in Vancouver at 5 p.m. Pacific time on Friday, spend Saturday and Sunday visiting my friend and puttering around the city, and fly back out at the crack of dawn Monday morning.

As far as weekend trips go, it was ambitious.

I don’t know what I can say about Canada, in particular — there aren’t many notable differences. True to cliché, people were very polite. Ironically, perhaps, there were a plethora of maple trees. But I also saw yellow poplars, rhododendron and dogwoods — there are some things 3,000 miles doesn’t change. But in Vancouver, the leaves were already tinged with color, showing flashes of yellow and red.

Vancouver is a beautiful city, backed up against the mountains and running down to the water. I got to experience it in fits and starts via public transportation — my friend did not have a car.

I’m skimming over the rest of the trip — a visit to the University of British Columbia’s world-renowned Museum of Anthropology, exploring downtown Vancouver, Granville Island and hiking through Stanley Park — because I want to get to the main event: whale watching.

People tell me I’m something of a whale enthusiast. I can’t say if that’s true, but whale watching has been on my bucket list for years.

Sunday we set out, clambering into our tour boat and turning the prow towards the ocean. The boat wasn’t small — it sat 20 in an enclosed cabin, with an upper deck where the captain sat — but it felt that way once we left the harbor and hit the Strait of Georgia. The blue-green waves tipped us this way and that, enough to make anyone a little bit seasick. But by the time we reached the islands, the water flattened into a mirrored calm.

I’d never thought about the mechanics of whale watching. The boats just set out, scattering over a wide area and heading towards routes that are well traveled by specific pods. The crew keeps an ear tuned to the radio, pulling information from other tours, fishermen or islanders. When someone spots a pod, every tour boat in the vicinity races towards the location.

We’d been out for about two hours, ducking and weaving between rocky, fir-covered islands, when the call came: orcas. The tour I was on was one of about two dozen who responded.

Orcas, also known as killer whales, are one of the larger species of toothed whale — but that doesn’t necessarily make them easy to spot. It was easy to catch the tall, straight fins — but seeing more than that proved to be a challenge. They rolled out of the water just long enough to breathe, flashing their backs and their white and grey saddle patches before plunging back under. Catching sight of the distinctive white eye patches felt like a rarity. Seeing an orca leap out of the sea, flinging spray, in a breach felt like a miracle.

We’d stumbled on a pod of about 25 whales, and as we sat, bobbing on the water, our boat’s guide and naturalist set about identifying them. The markings on each killer whale are as individual and unique as a fingerprint.

The orca closest to us, traveling with slow determination, proved to be “Granny” — at an estimated 105 years old, she’s the world’s oldest known orca. I think all my life’s luck was saved for that moment. Granny is famous, and I’m no small fan of hers. To see her, and her pod, was something I couldn’t have dreamed of.

Taking pictures, however, proved to be a challenge — where do you look when there are orcas in all directions? How do you take a level photo when the boat is constantly rocking with the waves? I did not get a single photo of a breach — something I’ll kick myself about for the rest of my life.

We followed the pod for an hour, pointing out calves, or the distinct straight fins of male orcas. There’s something strange about being stuck in a boat while something as large as a whale swims beside you, looking for salmon. You’re suddenly aware of the vast amounts of life teeming just beneath your feet. There’s a whole world down there, and it may as well be invisible, surface bound as you are.

Soon, we veered away, heading to catch a different pod. The tour lasted for about six hours, and along the way we stopped to snap photos of harbor porpoises, steller sea lions and cormorants.

The next morning at 5 a.m. found me camped out in the Vancouver airport, flicking through photos from the previous day. I can’t say I’d recommend a weekend trip, but if you ever find yourself in Vancouver, keep your eyes peeled — you never know what you’ll see.

For more information about this specific tour and whale watching in Vancouver, visit www.seabreezeadventures.ca