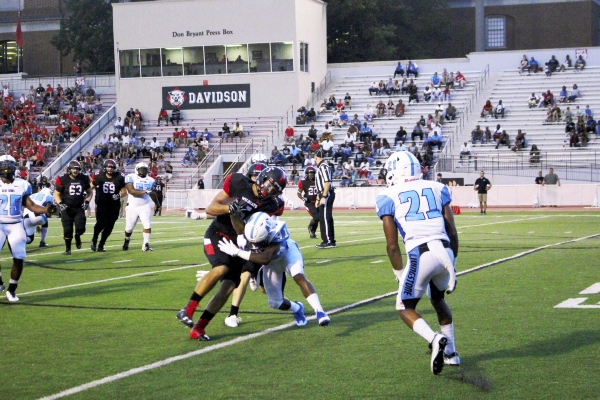 With a chance to convert their non-believers against Division I Davidson College, the visiting Blue Bears instead made tasty prey for the Wildcats in a 38-12 loss.

“It was all self-inflicted wounds,” coach Daryl Williams said after Livingstone (1-2) suffered four first-half turnovers in its final non-conference contest. “Against a Division I team, you can’t give four turnovers and a short field and expect to win.”

As poorly as Livingstone played in the first half — when Davidson (2-1) scored five touchdowns and kicked a field goal — its second-half performance was equally encouraging. The Blue Bears limited Davidson to four first downs and 52 total yards in the third and fourth quarters.

“They were talented, fast and organized on defense,” said Davidson coach Paul Nichols. “We knew coming in that they were a good defensive team and they didn’t let us down.”

The Blue Bears found some positives in the loss.

“It was a good learning lesson,” senior defensive back Danny Robinson said. “We don’t want guys going into the CIAA games feeling all cocky. We need to get better, but we all need to understand where we are and where we need to be.”

Things got messy for LC almost immediately. Facing fourth-and-7 on its first possession, Livingstone was thwarted on a fake punt attempt from deep in its own territory. Two snaps later, Davidson quarterback Stockton McGuire scored on a 6-yard touchdown run and the rout was on.

“The fake was there,” Williiams said after up-man DeMarcus Nolan was stopped for no gain on the 24-yard line. “The guy didn’t come out of the tackle, but it was there. He just didn’t get it. It was my decision, my call, right at the start of the game. I knew coming in we were gonna have to pull out all the stops.”

Livingstone’s third possession turned into a misadventure when freshman punter Tyler Keene fumbled a snap and Davidson’s Thomas Sykes scooped up the loose ball like it was a late-night snack, then  returned it 20 yards for another touchdown.

Davidson’s lead bulged to 21-0 late in the first period when McGuire spotted wide receiver Derek Jones open for a 12-yard touchdown pass. It got worse in the second quarter, when Davidson’s Preston Grase returned a Bryan Digsby interception 43 yards yards for a TD and freshman running back Keylan Brown scored on an yard burst.

Livingstone finally registered a pulse late in the half when Digsby (18-for-37, 201 yards) directed a hurry-up, 46-yard scoring drive. Former Salisbury High School standout Justin Ruffin scored his first collegiate touchdown on a 3-yard run with no time on the clock.

“In the first half, we had a couple of bad snaps and a dropped punt,” said Everett Ramsom, LC’s top receiver with seven catches for 94 yards. “But it wasn’t just the offense. We made a bunch of mistakes.”

They stopped making them in the second half. Livingstone’s defense pitched a shutout over the last two quarters, forcing the Wildcats to punt on each of their four possessions. Meanwhile the LC offense began to click, churning out 173 total yards. The Blue Bears converted three consecutive fourth-down plays before a third-period drive stalled at the Davidson 30. Another drive reached the DC 29 before an intentional grounding penalty cut it short.

“I liked how we moved the ball,” Williams said. “It’s a good way to move into our conference season.”

The Blue Bears go in on a bright note, thanks largely to the work of backup quarterback Dallas Bruton. The freshman from Lexington, Ky. directed an impressive 18-play, 86-yard scoring drive in the fourth quarter. He capped it with an 8-yard touchdown pass to Andrew Gamble with 9:07 remaining.

“If we don’t turn the ball over, this is a better game,” Williams said afterward. “It’s no indication of what kind of team we have. We turned the ball over in the first half and we shut them out in the second. I like what we did here.”

NOTES: Livingstone used a different starting quarterback in each of its non-league games. It opens the CIAA season Saturday afternoon when Chowan visits Alumni Stadium. “We’ll have the quarterback situation resolved by Saturday,” Williams promised. … Ruffin had three rushes for 18 yards and returned three kickoffs for 42. … Davidson’s defense recorded six sacks. … LC’s longest play from scrimmage was Digsby’s 36-yard completion to Ransom with less than a minute to play in the first half.