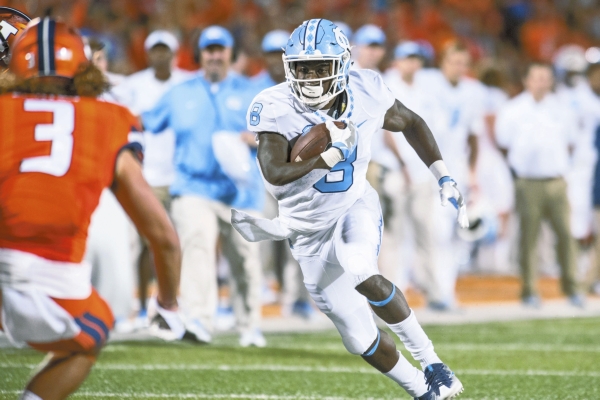 FILE - In this Sept. 10, 2016, file photo, North Carolina running back T.J. Logan (8) runs the ball during an NCAA college football game against Illinois, in Champaign, Ill. Logan has come up with big runs and long kick returns to start his senior year. And he's been the Tar Heels' best player through the first two games. (AP Photo/Bradley Leeb, File)

Heading into Saturday’s home opener against James Madison, the Tar Heels gave up big rushing numbers in a season-opening loss to Georgia and got off to a bad start before settling down in last weekend’s win at Illinois. Now the Tar Heels are playing a team ranked No. 8 in the Championship Subdivision that has scored 136 points in its first two games.

“In two games, I don’t know that I can say I know exactly what our defense is or what our offense is, or what our special teams are yet,” coach Larry Fedora said. “I don’t know if in two games you’ve been through enough to be able to create that identity that you have. Another couple of games I think we’ll know who this team is.”

The problem for the Tar Heels (1-1) is familiar: run defense. After surrendering nearly 1,000 yards on the ground in their last two games of 2015, UNC gave up 289 yards rushing to the Nick Chubb-led Bulldogs.

Then the Tar Heels allowed a 65-yard touchdown run on the third snap against the Illini, though they tightened up and allowed 117 yards rushing the rest of the night in the 48-23 win.

“They probably watched our film and thought, ‘Oh these guys may not be that good in the run defense, they gave up all those yards to Nick Chubb,’ all that type of stuff,” UNC linebacker Andre Smith said. “So they’re going to come in really hyped, playing against Carolina, and so I just can’t wait for the opportunity to play against those guys.”

The Dukes are seeking to beat an Atlantic Coast Conference team for the third time, the last coming against Virginia Tech in 2010.

“You see some of these games that get way out of whack with the score — most of the time that happens because you go in there and do things you normally don’t do in a ballgame,” new JMU coach Mike Houston said. “If we can go in there and be us I think that’s going to be our best chance for success.”

Some other things to know about Saturday’s James Madison-North Carolina game:

DEFENSIVE HELP: UNC junior defensive end Tyler Powell hasn’t played due to personal issues. He returned to practice this week. It’s unclear what role he’ll play, but it certainly will help a front still shorthanded with junior Dajuan Drennon yet to play due to an undisclosed injury.

FAMILIAR FACES: The Dukes will have some familiarity with the Tar Heels. Former South Carolina quarterback Connor Mitch and former Duke receiver Terrence Alls have transferred in after playing UNC last year. Offensive coordinator Donnie Kirkpatrick also coached against UNC when he was an assistant at East Carolina.

LOGAN’S RUN: Senior tailback T.J. Logan has been the Tar Heels’ most impressive player so far. He ran for 80 yards and a touchdown to go with a 95-yard kick return for a touchdown against Georgia, then followed with a 58-yard return and a TD catch against Illinois. Logan is fifth nationally in all-purpose yardage (207 per game).

LINEBACKER PLAY: North Carolina’s linebackers are still learning on the job. New starters Andre Smith and Cole Holcomb have had good moments, but there have been some shaky ones, too — including when Smith’s defensive call to the line conflicted with another that came in on Illinois’ long TD run.

“It’s a young linebacking group,” second-year coordinator Gene Chizik said. “So those guys are going to have to continue to grow within the defense, and I think they are.”

OFFENSIVE LINES: James Madison’s projected starting offensive line checks in at an average of 6 feet, 3 inches and 296 pounds, so the Dukes have some size. As for UNC, the Tar Heels won’t have opening-game starter Tommy Hatton at right guard. He hasn’t practiced or played since the Georgia game due to personal issues. Fedora had hoped he would return this week.

South comes up short against Concord