Patrick Gannon: How NC has changed since 9/11 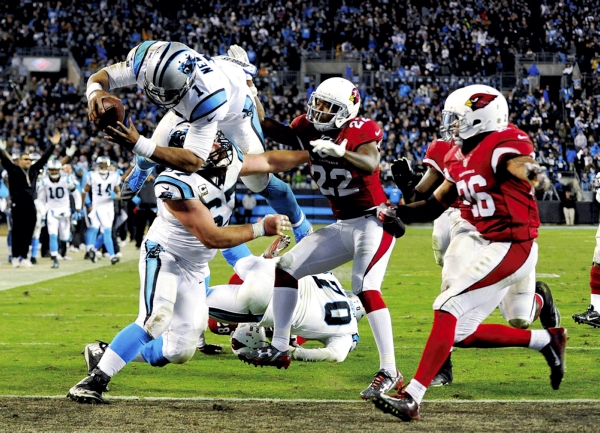 Carolina Panthers' Cam Newton leaps into the end zone for a touchdown run during the second half the NFL football NFC Championship game against the Arizona Cardinals Sunday, Jan. 24, 2016, in Charlotte, N.C. (AP Photo/Mike McCarn)

RALEIGH – On Sept. 11, 2001, North Carolina’s population was approximately 8.2 million people, ranking it as the 11th largest state in the country.

Fifteen years after that horrible day, North Carolina’s population has ballooned to well over 10 million. The Tar Heel State is now the nation’s ninth largest state population-wise. According to this year’s state budget message from Gov. Pat McCrory, North Carolina now has an average growth rate of 280 new residents every day.

That’s a lot of people. And during the past 15 years, North Carolina has seen a dramatic surge in its Hispanic population as well.

All the Sept. 11 ceremonies had me thinking about how much North Carolina has changed since then, and not just from a security standpoint.

Six different U.S. senators have represented North Carolina since 2001. In fact, Republican Elizabeth Dole announced she planned to run for Senate on that day back in 2001.

Fifteen years ago, Democrats held majorities in the House and Senate, which Republicans have controlled since the 2010 elections. Today’s Senate leader, Sen. Phil Berger of Eden, was just beginning his political career in that chamber’s GOP minority in 2001. Democrat Marc Basnight of Manteo led the Senate, which included among its members Perdue, now-U.S. Rep. Virginia Foxx and former U.S. Sen. Kay Hagan.

Democrat Jim Black of Matthews, who would later spend about three years in federal prison on corruption-related convictions, served as speaker of the House in 2001. House members back then included Republican Art Pope and Democrat Wayne Goodwin, who is now the state’s insurance commissioner.

About five years after Sept. 11, the N.C. Education Lottery started selling tickets. It has increased sales every year since, selling more than $15.8 billion in tickets and raising $4.6 billion for education.

The state’s first toll road — the Triangle Expressway — opened in late 2011, with several others in various stages of development.

Public charter schools have exploded in number and popularity in recent years, especially since the General Assembly lifted its 100-school cap in 2011. This school year, 167 charters are operating in North Carolina.

And, of course, we’ve all witnessed an incredible surge in technology since 2001. The iPhone was first released in 2007. Twitter started a year before that, in 2006. Facebook launched a couple of years before that.

Social media now is a top way that we break news, receive news and react to news.

In the sports world, the Carolina Panthers and Carolina Hurricanes have both gone twice to their sport’s championship since 2001. The Panthers haven’t won a Super Bowl yet. The Hurricanes won the Stanley Cup in 2006.

I welcome your thoughts on how North Carolina has changed for the better and worse since the turn of the century. Are we on the right track socially and politically?

Patrick Gannon is the columnist for the Capitol Press Association. Reach him at pgannon@ncinsider.com.