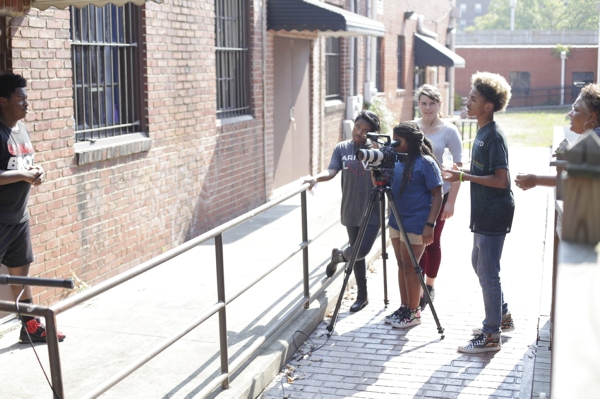 Submitted photo A group of teens created and filmed their own public service announcements with the help of Inside Out Global volunteers for a recent filmmaking workshop hosted by Mission House, a Salisbury based church.

SALISBURY — Gerald and Amy walk into the frame and both sit on a bench. They whip out their cell phones and begin conversing, not looking up once. The two are fictional characters played by local teens in a public service announcement who hope to drive home a clear point — connect more, type less.

Over a dozen local youth participated in a film project where local church, Mission House, partnered with nonprofit Inside Out Global to create three PSAs. The nonprofit, is the brainchild of co-founders Beth Fussner and Gavin Baulch, where volunteers help youth around the world “tell their stories and discover their strengths through filmmaking.”

Teams of students create short films that deal with issues that affect them and others around them including suicide, bullying, gang violence and peer pressure. The students attend film workshops where they learn to write scripts, create storyboards, film, and edit their own film. Workshops can last a few weeks, but a recent workshop hosted in Salisbury, lasted a weekend.

Ten-year-old Jordan Henderson is one of the youth participants and is featured as Amy in the film.

“I think it’s so amazing that one person started this and they have all these people coming with them. It’s a good way to take children’s energy to focus on something positive,” Henderson said.

She said it was amazing to see all of the films. She’s always wanted to act, but was never presented with the opportunity.

In the beginning, Henderson, who attends Mission House, only knew three people. She said by the end of the project she’d made lasting friendships. Mission House is a church that initially began meeting at ministers Anthony Smith and Dustin Wilson’s houses. The church now meets out of Isenberg Elementary School.

“We became like family and got to know each other,” she said.

Henderson said she gained a new appreciation for filmmaking. Once the films were edited, the church hosted a viewing. The students were able to show their hard work.

“I was nervous. I didn’t know if they would like it. They loved it. I was so proud of everybody,” Henderson said.

Henderson is a sixth grader at North Hills Christian School.

Danny Smith, Henderson’s stepfather, was pleased with the process saying he thought it was an opportunity for Jordan and his niece, Heavyn Henderson, to learn as much as they could about filmmaking.

“There’s so much issues that go on with young folks and sometimes we don’t know how to talk to young people. It gave them an opportunity to voice their concerns,” Smith said.

The students put in a 13-hour day beginning with a “get-to-know-you” mixer.

He said one of the most important lessons he wanted them to learn was that “if you are doing something that you love — it’s not work anymore.”

There were a total of 16 youth from the ages of 10 to 18, who came up with their own film production names and worked with Inside Out volunteers, all of whom who have filmmaking backgrounds.

Mission House and the nonprofit provided mentors and volunteers who walked alongside the students. The students divided into three film crews, each with an adult mentor. Two other films were created that address gangs and bullying.

Smith and Wilson met Sojourners magazine writer Christin Taylor, whose aunt Beth Fussner, co-created Inside Out Global. The nonprofit is based in Tennessee, but reaches areas in Australia and Armenia.

“It came out of a conversation around creating a space for youth to realize their own voice, to be creative and artistic,” Smith said.

Smith and Wilson believed Inside Out Global was a powerful project for area youth to participate.

“They help youth discover their own strengths and help develop and tell their own story. They teach them how to make films,” Smith said.

“The heart of it was to create a space for the youth to be creative and to make something beautiful for the world,” he added.

Smith said his goal is that this community would “realize there are powerful youth in our community that want to impact and bring positivity amongst their peers,” he said.

“I really feel like we’re on the cusp of a renaissance in our community. There’s a lot of creativity and artistic projects in Salisbury,” Smith said.

Fussner said she and others with Inside Out met in March and spent the weekend in Salisbury. They walked around town and talked about their goals and visions.

She said a typical workshop is one week to eight days and is usually residential. During the workshops, participants create a 30-second public service announcement and a five-minute film.

The nonprofit proposed to introduce local students to the first segment of a typical workshop and create a PSA.

The question organizers asked students in hopes to get the creative juices flowing was “if you could say one thing to the world what would it be?”
Fussner said this short film workshop in Salisbury was not just a one-time opportunity. She’d like to see something continue in the area.

She said they want to support things that are happening in Salisbury and the things that Mission House is doing.

For more about Mission House visit www.missionhousenc.com and http://insideoutglobal.org/ for more details about Inside Out Global. To watch the public service announcements follow the link https://vimeo.com/user42969753