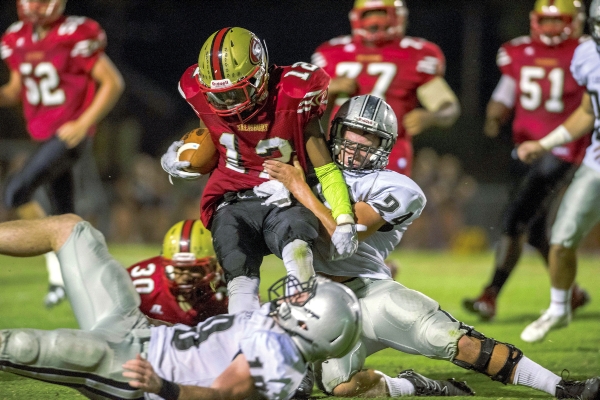 SALISBURY — The Ledford Panthers racked up 28 points in a decisive second quarter and used its precision option offense to slice up the Salisbury Hornets last night, 41-7, in a non-conference game at Ludwig Stadium.

As efficient as the Panthers were in scoring points, it will be Ledford’s big defensive tackle Donnavan Campbell that gives Hornet coach Ryan Crowder nightmares for the next few days. “That number 92 (Campbell) was a beast,” Crowder said. “We tried a little bit of everything against him tonight but he just made play after play after play.”

The 6-0, 265 senior defensive lineman disrupted the Salisbury triple option attack up the middle, on the edges and by harassing quarterback Griffin Myers (two sacks) on pass plays.  “He (Campbell) clogged up the whole back side of our attack by himself”

Campbell was not a one-man wrecking crew for the Panthers (3-2) as their entire defense held Salisbury (1-4) to 158 yards of total offense and only one sustained drive that resulted in a score.

“Our defense did what they usually do and I am proud of the way they battled,” Ledford head coach Chris Adams stated. “That was a tough attack Salisbury had and we have not seen that wishbone option this season. But we had a good week of preparation for it.”

The Panther offense showed their versatility in the first half, especially by relatively new quarterback McCallister Ingram. The 180-pound senior took over the Ledford offense two games ago and has produced a pair of important non-conference wins for them. He had Ledford at the Salisbury 17 on the first drive of the night but penalties caused them to turn it over on downs. But at the end of the first quarter he hit receiver Austin Swink for 27 yards to convert a third and 12 and that started the onslaught of four quick touchdowns that sealed the fate of the Hornets.

Halfback Billy Caulder broke a 0-0 deadlock on the second play of the second quarter with a 1 yard run to make it 7-0 Panthers. Salisbury seemed to be ready to respond when Cameron Horne took the ensuing kickoff 54 yards to the Ledford 41. But disaster quickly struck on the next play when Marcus Corry fumbled and Ledford’s Alex Hallman scooped it up and ran all the way to the Salisbury 20. Despite a 15-yard penalty, Ingram found receiver Ryan Hunter sprinting across the goal line from 34 yards out for the score and a 14-0 lead.

The Panthers then put together a 64-yard clock-eating drive capped by a 6-yard keeper by Ingram to up the score to 20-0 with just 3:33 left in the first half. But he was not done with his heroics. Salisbury moved it to midfield on screens passes from Myers to Trell Baker and Horne. But the drive stalled there and the Hornets were forced to punt for the fourth time in the half. Ingram weaved through good coverage to catch Will Taylor’s punt on a dead sprint at the 25. He broke down the left sideline virtually untouched to complete a 75-yard scoring play and give his team the 28-0 lead.

“Offensively, we clicked pretty good tonight, ” Ledford’s Adams said. “When you run our option, you just have to read their guys and get comfortable with it. We did a good job of taking what he defense gave us.”

Ledford expanded their lead to 34-0 in the third period on a two-yard run by senior Cole Crowe. Salisbury responded with their best offensive effort of the night when Myers hit Taylor for 34 yards down the right sideline to convert a fourth and 4. Two plays later, on the first play of the fourth quarter, senior Tywun Rivens bulldozed his way up the middle through several defenders for a 22-yard touchdown. Erixon Avila’s kick made it 34-7.

The Hornets had one more possession in the game but could not mount another threat. Ledford ran down the clock and capped the scoring for the night with just 1:45 left when Crowe broke off right tackle for 17 yards.

“We just have to do a better job of getting off the field on third down defensively and find a way to extend drives on offense,” Crowder said of the Hornets. “We still have our whole conference schedule in front of us so we can still do great things.”

The Hornets have one more non-league game at Surry Central next week before diving into Central Carolina’s Conference play in October.