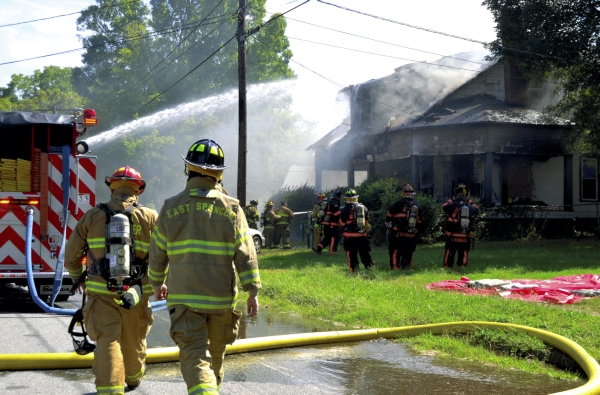 Multiple fire departments responded to this East Torbush Drive home where Pat "Mother Blues" Cohen has lived since 2005 when she fled the flood waters of Hurricane Katrina. She was grilling on her porch before the fire and only had time to grab her Boston terrier Bubbles who was on the porch after flames shot up to the roof. Shavonne Walker/Salisbury Post

EAST SPENCER — Donations are being requested following a Wednesday afternoon fire at the home of international singer/entertainer Pat “Mother Blues” Cohen where she lost all of her possessions.

It was over 10 years ago that Cohen lost everything in New Orleans during Hurricane Katrina. In 2005, she moved to East Spencer where she’s lived at 210 E. Torbush St. since that time.

Cohen was cooking on the grill on her front porch when she went inside. She returned outside to see fire creeping up toward her roof. Her house was destroyed and all of her belongings. She managed to get out with the clothes on her back, no shoes and her dog, Bubbles.

Cohen did not have insurance. The Hanford Dole Chapter of the American Red Cross is collecting donations for Cohen who also lost her music equipment and costumes.

“She lost all of her entertainment equipment — computer, music, cordless microphone — as well as her makeup, and hair that she uses to perform,” LeMaster said.

“She lost her livelihood in addition to her home,” she said.

In addition to her music equipment, LeMaster said, Cohen will also need the basics including furniture, a bed, a couch, kitchen items including pots and pans, plates and utensils as well as linens and towels.