South comes up short against Concord 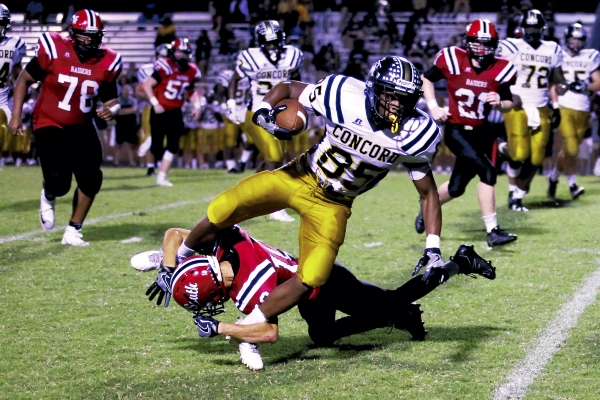 LANDIS — South Rowan may be on the road to Good Enough, but it wasn’t good enough Friday night.

The Raiders lost three fumbles — two of them on kick returns — and their defense leaked like the Titanic, yielding more than 500 yards in a 41-11 drubbing against visiting Concord.

“Concord’s a good team. Hats off to them,” second-year coach Daniel Yow said after South (0-4. 0-2 SPC) absorbed its 15th consecutive loss on the field. “But I felt we could compete with them and when we played hard, we made plays. We’re just beating ourselves right now.”

The Raiders, still smarting from last week’s one-point conference loss to Northwest Cabarrus, were in this one for a quarter-and-a-half. They trailed 7-3 before Concord (4-1, 2-0) scored three touchdowns in the last 4:24 of the first half, abruptly separating the wheat from the chaff.

“It took us a little while to adjust to what they were doing,” said winning coach Glen Padgett. “We had to slow down their quarterback, who was a tough kid. But eventually we were able to execute the things we expect to do.”

Things like busting 18 plays that gained at least 10 yards. And things like scoring touchdowns on five straight possessions. And things like keeping South out of the end zone until QB Austin Chrismon scored a too-late-to-matter TD midway through the fourth quarter.

“Good times, bad times,” Chrismon said after passing for 68 yards and rushing for 53 against Concord’s stout defense. “We’re a better team than we were last year. We’ve just got to fix our mistakes.”

South’s first one came on the game’s opening possession. Chrismon steered the Raiders to the Concord 21-yard line, where a botched exchange with running back Sayquan Anthony resulted in a turnover.

“That was frustrating,” said the ever-optimistic Chrismon. “We moved the ball all the way down the field and lost it. But we focused on the good part — that we had gotten down there — and moved on.”

“That’s something we’ve got to get better at,” added South receiver Daevonne Harris. “Hanging on to the ball. That was a chance we didn’t capitalize on.”

Concord had five penalties in the first quarter, including four 15-yarders, but still took a 7-0 lead late in the period. Anchored by quarterback Jacob Irby — who passed for 247 yards and two touchdowns — the Spiders maneuvered downfield like they were on a 3-on-1 fast-break. They went up 13-3 on Irby’s 1-yard TD plunge, then made it 21-3 when wide receiver Antonio Campbell found a seam in the center of SR’s secondary, collected a spiral from Irby and turned it into a 74-yard scoring play. Only 56 seconds remained in the half when Irby, a 6-foot-5 senior, connected with wide-open Zyoin Boger on a 26-yard touchdown play down the left side.

“Jacob did a good job engineering the offense for us,” Padgett said. “He’s always been able to do that.”

South, meanwhile, struggled somewhat against Concord’s beefy defense. It ran only three plays from scrimmage in the third quarter. Chrismon was sacked three times in the first half and spent much of the night running for his life. He did, however, save his best for last, leading a 12-pay, 90-yard touchdown drive in the waning moments. The 190-pound senior scored his fourth TD of the season on an 18-yard bootleg — extending his body to swipe the the pylon for the score.

“Nothing really changed,” he said afterward. “We just tried to get everybody to play every drive like it was the first one of the game. There’s no reason to ever take a play off.”

Yow was looking for a coming-of-age performance from the Raiders, but didn’t get it.

“Every team we’ve played this year has told us how much better we’re getting,” he said. “There were a lot of positives from tonight, but obviously the scoreboard’s not reflecting that right now.”

Chrismon believes it’s only a matter of time before South wins its first game. “We’re climbing the stairs,” he said. “We will get there one of these weeks.”