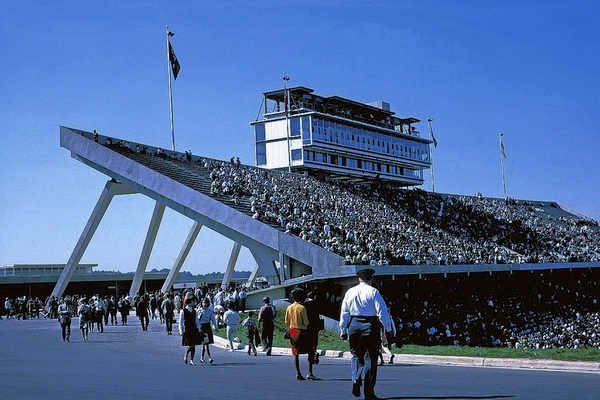 Photo courtesy of Charles Kahn Before changes and expansion, Carter-Finley Stadium, which opened in 1966, had a capacity of 41,000 seats and was hailed for its modernist design. Architect Charles Kahn was one of the stadium's principal designers, who also figured out a tower system for holding the old press box seen at the top of these stands.

At first blush, this is surprising. Kahn was born in Birmingham, Ala. He spent his school years in New York. And by the time his parents moved to Concord, N.C., and he was only 16, Kahn already was enrolled at the University of North Carolina.

By 1943, Kahn was an aviation cadet for the Navy, and after World War II, he returned to academia and years spent at UNC, N.C. State, MIT and N.C. State again.

So why does Kahn, one of the principal designers of N.C State’s Carter Finley Stadium, have such an affection for Salisbury?

“My connection really was the connection I had in visiting my mother and father and aunt and uncle,” Kahn said in a recent telephone interview from his home in Chapel Hill.

“Physically, I never lived there. But I came back quite frequently and always considered it my hometown in North Carolina.”

Kahn’s parents later moved from Concord to Salisbury and quickly became highly valued citizens through many of their affiliations and volunteer activities. They died here — Ben Kahn in 1961; Dorothy Kahn, in 1974 — and both are buried in Salisbury’s City Memorial Park.

Charles Kahn said his parents’ house on Mahaley Avenue was purchased eventually by the hospital and leveled for a parking lot. After his Ben Kahn’s death, Dorothy Kahn moved in with her sister, Sylvia Goldman Feit, who also lived on Mahaley Avenue.

Memories have been flooding back to the 90-year-old Kahn lately, particularly those associated with the 50th anniversary of Carter-Finley Stadium, the football home of N.C. State.

People with N.C. State — former Post sportswriter Tim Peeler among them — are trying to persuade Kahn to attend a birthday celebration for the stadium, coinciding with State’s Oct. 8 home game against Notre Dame.

The first game in Carter-Finley was played Oct. 8, 1966, against South Carolina.

Charles Kahn was one of three engineers and/or architects credited with Carter-Finley’s modernist design, which relied on a pre-cast concrete construction approach because the builders had only a 22-month time frame in which to have the new stadium ready for the 1966 football season.

Kahn compared the construction of the stadium to putting together pieces of a Tinker Toy set. Others have described it as having an erector set-type of feel to it.

Kahn and fellow architect G. Milton Small also came up with the design idea for the stadium press box, which relied on support from two concrete towers — one for communications equipment, the other for the elevator and stairs. Between the towers sat the steel press box, sections of which were prefabricated on the ground and hoisted into place by crane.

“It was a really interesting design,” Kahn said.

That press box is no longer there, which surprised Kahn on his recent visit. He hadn’t set foot in the stadium for about three decades.

Carter-Finley’s original design provided a seating capacity for 41,000 fans. Peeler reports that close to $200 million in expansions and improvements have occurred in the 50 years since the stadium’s opening. The original press box gave way to the seven-story Vaughn Towers in 2005, and both end zones have been enclosed, giving the stadium a seating capacity today of 57,600.

Kahn was an associate professor of design at N.C. State during the stadium’s construction. He served on the N.C. State School of Design faculty from 1959-1968. He also was the project architect for Minges Coliseum at East Carolina University and the Poliedro de Caracas in Venezuela.

In 1968, Kahn became the first dean of the School of Architecture and Urban Design at the University of Kansas and he stayed in the college ranks until his retirement in 1991. He has designed several modernist houses in Chapel Hill.

Kahn likes to say he has a full N.C. heritage because he is a graduate of both UNC and N.C. State.

He earned his bachelor of arts degree in math and physics from UNC in 1946 and his bachelor’s of civil engineering degree from N.C. State in 1948. Kahn then earned his master’s of science degree in structural design from the Massachusetts Institute of Technology in 1949.

He worked with various architectural firms in Charlotte, Atlanta and New York before going back to N.C. State in the fall of 1952 to pursue his architectural degree, which he secured in 1956.

There were periods — mostly summers, Kahn says — when he worked for architect John E. Ramsay’s firm in Salisbury. Before becoming a full-time faculty member at N.C. State in 1959, Kahn planned to work for Ramsay, who became a great friend and influence over the years.

After earning his architectural degree in 1956 and being an assistant professor of engineering at State for a year, Kahn received a Fulbright Scholarship, leading to more than a year abroad in Italy. During the summer of 1957, Kahn attended a symposium of international architects in Vienna, besides spending several weeks in an Italian language school.

He then studied at he University of Rome under Pier Luigi Nervi, an Italian engineer and designer of the Turin Exhibition Hall. In Rome, Kahn studied the Colosseum and the city’s Stadio Olimpico and the Palazzo Dello Sport. The latter two facilities had been built for the 1960 Olympics, and Peeler said they heavily influenced Kahn’s design work on Carter-Finley Stadium.

Kahn’s mother, Dorothy Goldman, grew up in Birmingham, Ala., where as a young woman she met Ben Kahn, a traveling salesman out of New York. The couple married and lived in Birmingham, where their only child, Charles, was born. After their many years of living in New York, the family moved to Concord, where Ben managed the Gold Shop.

Later in Salisbury, Ben Kahn worked out of the Gold Shop headquarters, while he and Dorothy also became active in community affairs. Ben Kahn was a devoted member of the Lions Club, leading its White Cane campaign one year. In 1954, the club named him Salisbury’s Man of the Year.

Charles Kahn also remembers his father’s being actively involved as a volunteer at the VA hospital in Salisbury, working closely with a Christmas gift program for veterans. His other community interests included Little League baseball, the Elks Lodge, the N.C. Symphony Society and the local polio, United Fund, cancer and heart drives.

Both Ben and Dorothy were strong members of Temple Israel. Dorothy belonged to the N.C. Council of Jewish Women, the Women’s Organization of the National Jewish Welfare board, the N.C. Jewish Home for the Aged in Clemmons and the women’s auxiliary of the Samuel C. Hart American Legion Post.

“I was very proud of both of them,” Charles Kahn said.

As they were of him.