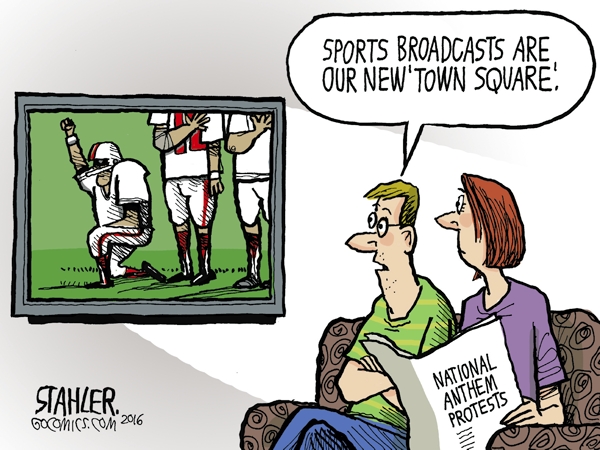 Well, not only are our wells contaminated, but the river is too. We’re doomed. I’ve lived here since 1984 and I find out that several of our neighbors have breast cancer, liver cancer, kidney cancer and who knows what else. We live between Duke steam plant and Yadkin River. Now what?

For the life of me, I can’t comprehend why the Salisbury Post hates Governor McCrory with an evil passion reminiscent of a caged mongoose and cobra. If the Post isn’t on the payroll of Roy Cooper’s election campaign, then somebody in Salisbury is in a coma.

Coal ash has been on the front page for over 17 months without Roy Cooper. Where have you been?

… Salisbury couple charged after 100-plus marijuana plants found in home

So, these cops had solved every single murder and violent crime and were looking for something more to do, right? Anyone can see that cannabis prohibition is a complete waste of precious law enforcement and court resources.

In another state these people might have been legal, tax-paying entrepreneurs. We need a federal law on this, just like we now have one on marriage equality. When states differ so widely on laws, it’s unfair to all citizens.

… My Turn: To make good decisions, you need good data

How would you propose to bring such development to the area, considering the current market conditions and other factors that have drawn such development away or prevent it from taking root here?

Should we decline what development we are able to attract because it doesn’t fit a particular vision, or should we take the stance of “we’ll take what we can get?”

… To help answer these questions and to address the data issue you say is a major part of this, I would suggest that case studies (be done) of other municipalities that have undergone (or are undertaking) downtown revitalization projects. Muncie, Indiana, would be one potential starting point. I would also suggest taking your questions to those with expertise in the field of urban planning, and discussing how revitalizing a city core can benefit the outlying sectors, or potentially hurt.

You are indeed correct that the data is out there, and can be interpreted and applied to our situation here. But the real question is if and how that would be used to solve problems instead of solely pointing them out.

I agree with Councilman Hardin’s contentions that efforts should be made to develop other areas, rather than to just cater to a few families who possess real estate downtown. The councilman is aware that there is no real strategy to be inclusive, as many of the other members propose. The potential to make this city vibrant is evident, but those few families are unwilling to allow the municipal administrators do what is needed.

We have been working with Ms. Bohland for over a year to increase participation of minorities, recruit black businesses and to host business development workshops. We shared a jobs training program that facilitates young people obtaining the essential skills to enter pre-apprentice programs, including, electrical, carpenters, floor finishing and concrete, and construction. We launched a “boots on the ground” effort to reduce the violence and educate young people. …

Look at the composition of the 20/20 Steering Committee, then review the demographics. After that, review the 2014 Analysis of Impediments to Fair Housing to see the admissions of illegal and unfair practices that continue to marginalize black and poor communities.

I and the Fourth Circuit of Appeals do not buy your numbers or your argument. In-person voter fraud is as rare as hen’s teeth, according to numerous studies. There is far more potential for absentee ballot fraud. Why is there little or no concern over the integrity of ballots that are cast by mail, away from polling places? Is a state-recognized photo ID required to vote by absentee ballot?

… Bitzer: If Trump campaign were a business, it would be in trouble

Hillary is in trouble, and team Soros is considering the yanking of their quarterback. It’s an old trick, Bitzer, trying to deflect attention from your candidate’s foibles by attacking the other one, but it won’t work. You’ve been overtaken by events. Just sign me, sir, as a Deplorable for Trump. It’s a badge I wear proudly, sir.

Actually, Trump has had several failures: Trump University, Trump Air, Trump Wine, Trump Casino, to name just a few, not to mention three marriages. Basically, without his father personally guaranteeing junior’s loans, Donald would be back in Brooklyn collecting rent for his father.

I appreciate Tamara Barringer, wife of Salisbury native Brent Barringer, for being the first Republican to call for repeal of HB2.

“…this tolerance stuff”? As in, this equal protection under the law stuff? More of Ford’s and the GOP’s unfathomable tone-deafness when it comes to respect and concern for anyone different from him and his ilk.

These guys all say most people approve of this silly mess and don’t listen to polls. They only hear from their “people,” as the rest of us know they only listen to them. I hope the voting public pays attention and votes out all of them they can. Sorry Carl Ford won’t go.

As a straight middle class white man from China Grove, I’m embarrassed that Carl Ford is from China Grove. Not even counting the “official religion” debacle from a few years ago, the words that come out of his mouth most of the time just make me lose IQ points.

We have got to get people out to vote in more than just presidential elections. These guys that are running N.C. into the ground are voted for every two years. And too many people don’t bother to vote every time the polls are open.

Run an article on Harry’s emails inquiring on the voting patterns of African Americans and the passage of legislation that was directly designed to limit African Americans’ participation in the electoral process — and since has been declared unconstitutional. … “Duly elected officials” who in many cases run unopposed, enjoy the benefit of gerrymandered districts and represent ideology of only a small percentage of this state’s population. What a sad state of affairs.

These guys do not represent us, therefore they should not pretend to.

Every time I saw Taylor at a track meet, she was always smiling or laughing. I just want the family to know how much I appreciated Taylor for the way she made my stepson, Cody Tidwell, feel about himself.

Just three weeks ago, at the North-East football game, Taylor was picked up by my husband, Steve Tidwell, and my son-in-law, Dustin Artz. Some people would have resented having to be picked up because there was no ramp for Taylor to use.

To the family, you had an exceptional young lady in Taylor, a person who thought of others instead of herself when she had every right to think of herself, but she didn’t. That’s the kind of person Taylor was, always thinking of others before herself. Thank you for sharing such an angel with us.

May his wings carry you wherever you want to go. Angel, you will be missed by many

To the family, there is a window that heaven keeps open, so whenever you want to let your baby know something, just whisper … and if you’re ever out and about and a feather falls, your baby angel is near. And any time you come across a stray penny, pick it up and put it in a jar ‘cause your baby girl is tossing them from heaven.

God speed on healing. I hope these words help. They help me when I miss my son.

Taylor was a very special young lady, and I always enjoyed hearing her sing at Luther’s Lutheran Church when my wife and I visited the church we were married in. She will be missed!

They tell you they can’t guarantee jobs, etc. — waste of time. Just go apply for jobs and get one on your own. You enroll and complete the course and if you get hired at a company that pays them to be affiliated with them, you have a chance at a low-paying job.

You are mistaken about this program. More than 96 percent of those that complete it are immediately employed by a local company. Starting annual pay exceeds $35,000 per year, with benefits and opportunities for advancement. The program is funded by grants, donations and company contributions. Graduates of the program also have a nationally recognized certification that manufacturing employers look for.

Proposing to demolish an historic building is something we hardly ever do in our downtown. This was a very difficult realization to come to, but when all of the factors are considered, a new two- or three-story facility placed up to the Innes Street sidewalk is a much greater use for that property. More jobs, more residences, more tax base, better gateway into our downtown. As much as I love working on historic buildings, preservation can’t be the only factor in the overall development decision process.

However, preservation is what the Historic Preservation Commission and Historic Salisbury Foundation are tasked to provide. We have no issue with their decision to delay for 365 days and expected that they would do as much. I applaud their discussions … and look forward to further discussions with them as we spend this next 365 days examining the alternatives.

I echo Pete’s comment that it was a very difficult realization to come to. We have tried for almost a year to look for ways to adapt the existing structure for our use, but have been unsuccessful. The building as it exists has very limited use, as evidenced by it being vacant for 3+ years, and the prospects for short-term occupants at best.

This is an important gateway into downtown Salisbury and the proper development will encourage adaptive reuse of the adjacent buildings and help preserve the character of our historic downtown.

Although disappointed in the Historic Preservation Commission decision to delay, I appreciate the members of the commission and their willingness to serve. It was my first time at an HPC meeting and it was evident that each commissioner wanted to be as informed as possible and that they all took their job seriously. I, too, look forward to our future discussions.