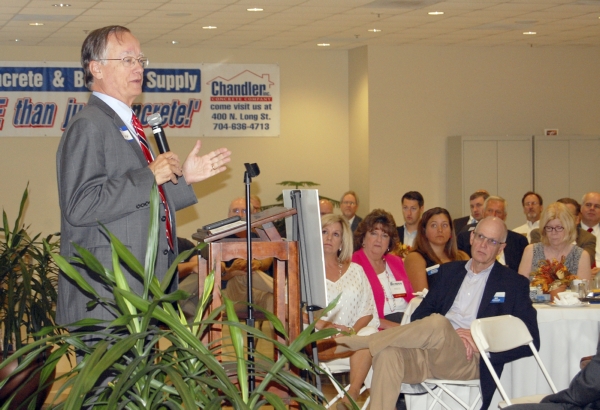 SALISBURY — The secretary of the North Carolina Department of Transportation talked about some transportation challenges to kick off the Power in Partnership breakfast series.

The Rowan County Chamber of Commerce’s Power in Partnership breakfast series is back for its third year with Transportation Secretary Nick Tennyson as the first guest speaker.

According to the state Department of Transportation website, before being named secretary in August of 2015, Tennyson was the department’s chief deputy secretary and also served as interim commissioner of the Division of Motor Vehicles for three months.

“That has been huge and has made a lot of difference in terms of the actual reflection of local priorities in what we do with our transportation funding,” he said.

Tennyson said it was important to note that there is not enough money to complete all of the infrastructure projects requested in the state. He said under the current process, only about 16 percent to 18 percent of eligible projects are actually included in the plans.

Tennyson said $1 billion is a lot of money, but based on the competitive bid process, it costs about a minimum $4 million per mile to build a two-lane road.

Tennyson said the $1 billion is raised by the federal gas tax every year for the most part, but the last time the tax changed was in 1993.

“There is nothing that you buy that costs you the same amount of money today as it cost you in 1993,” he said, “and, yet, what we’re saying is, per unit of use, we’re going to go ahead and provide the same facilities, the same service, for the money that we got in 1993.”

Tennyson said a funding issue is looming, and it could affect states that are experiencing growth like North Carolina.

He said there is a need for investment in areas like surface transportation of cars and trucks.

“How do you do that? You unfortunately have to widen and build new lanes in areas where it’s gotten more and more expensive to do,” he said, adding that many “high-growth areas” are choosing to pay for those projects with toll roads and lanes.

The next Power in Partnership breakfast will feature a candidate forum and is on Oct. 20 at 728 Klumac Road.