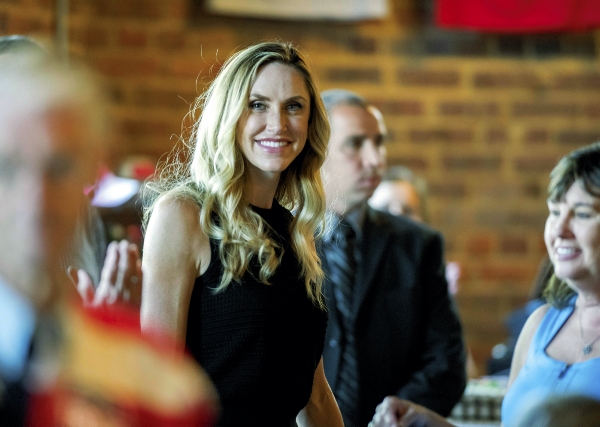 SALISBURY — America should elect a female president one day, but it shouldn’t be Hillary Clinton, said North Carolina native Lara Trump during a downtown event on Wednesday.

Lara Trump spoke to a crowd of several dozen Republicans who were gathered at the newly opened Morgan Ridge Railwalk Brewery and Eatery on North Lee Street. She spoke positively about the personal side of Republican presidential nominee Donald Trump, her father-in-law, touted his policy ideas and dished out criticism of Clinton, the Democratic presidential nominee.

Lara Trump said she wouldn’t participate in campaign events and endorse Donald Trump if she didn’t believe his intentions were true.

“He’s everywhere all the time, working his heart out because he knows that this is the last chance that we have for this country,” she said during Wednesday’s event. “We really have to make some changes and he wants to make things better.”

When talking about policy ideas, she said Donald Trump wants to  “make it easier to be a family, give childcare deductions and make it easier to be a working mom.” She referenced Donald Trump’s child care plan, release one day earlier. One part of the plan aims to rewrite the tax code to allow parents to deduct child care expenses from income taxes for up to four children and elderly dependents.

In an interview with the Salisbury Post after the speech, Lara Trump elaborated about her father-in-law’s policy ideas. She said North Carolina voters should be concerned about illegal immigration and lost manufacturing jobs.

Her speech to Rowan Republicans lasted about seven minutes. Afterward, she spoke and took pictures with attendees.

“It’s called a Trump train for a reason because if you’re on the tracks, it’s coming through for you, and you’d better move out of the way,” Lara Trump said.

Lara Trump said she knows a woman will eventually be elected president one day. It’s something that should happen, she said.

“That woman is not Hillary Rodham Clinton,” Lara Trump said to a round of applause.

Edds was initially hesitant to say who he planned to vote for in November. Later, Edds said he plans to vote for Donald Trump because the businessman knows how to negotiate, how to create jobs and what it takes to compete in a global economy.

Alexander said she hasn’t yet decided who to vote for in November’s presidential election. She likened her vote to a decision during a City Council meeting. Alexander said she wants to have “all the information” before casting her vote.

Others at Wednesday’s event were a bit more enthusiastic about their support for Donald Trump. Sitting at the same table in Morgan Ridge Railwalk, Dot Gandy, Jimmie Lee Smith and Toni Gaskey listed a number of reasons why they believe the GOP nominee is the best choice for president. The trio’s reasons included that Donald Trump stands up for what he believes in, doesn’t back down under pressure and isn’t a politician. All three mentioned a wall at the Mexican-American border.

“And Mexico is going to pay for it,” Gandy said enthusiastically.

Reasons listed by other attendees were relatively similar. Sharon Barlow, who works in Salisbury, was one of the few attendees who listed a specific policy position that she likes — that Donald Trump supports the H-2B visa program.

“He understands the industry that I represent,” Barlow said. “I run a trade publication, and the industry relies on the H-2B labor program.”

Local businessman John Leatherman, who formerly served as the Rowan GOP chairman, said Clinton would be a third term of President Barack Obama’s policies. Attached to Leatherman’s shirt was a pin that read “Hillary for jail.”

Attendees of Wednesday’s event say that Donald Trump’s often controversial statements aren’t bothersome. A number of attendees that spoke to the Salisbury Post said it’s understandable because Trump isn’t a politician. During the course of a campaign, it makes sense that he would say controversial things, attendees said.

A presidential candidate hasn’t visited Rowan County yet during the current election season. Wednesday’s event, however, was the second time a surrogate from a presidential campaign has spoke during a local event. During this year’s Rowan Democratic Party picnic, Charlotte Mayor Jennifer Roberts spoke on behalf of the Clinton campaign.