Prep Football: East at Carson, Salisbury and South at home 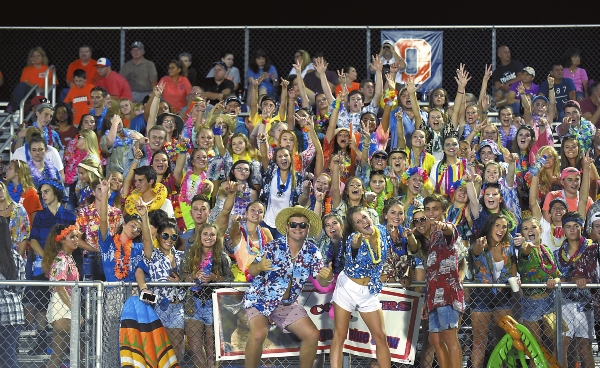 Week 4 of the prep football season was surprisingly good for Rowan County and quite a bit sunnier than the gloomy forecast offered last Friday in this column.
The picks (a shaky 12-7 for the year) were a so-so, 4-3 for the week, with A.L. Brown’s upset loss at Mooresville the most astounding result. The other misses were Robinson-West Rowan and Central Cabarrus-Carson, games that were perceived as tossups.
The common denominator — a term that still lingers in my head from long-ago tussles with algebra — for the teams that won last Friday was simply home field.
Home field isn’t everything, but obviously it matters a lot. Had I selected the home teams to win last week, the picks would’ve been, 7-0.
The picks actually came very close to a dismal, 2-5, and that would’ve made by retirement as the Post’s picker official. Missed/blocked extra points decided North Rowan’s loss at Davie and South Rowan’s loss at Northwest Cabarrus.
East Rowan won at home against Cox Mill and Lake Norman won at home against Salisbury with some degree of comfort.
So the question this week is whether to take 10 seconds to pick the home teams or to spend 30 minutes analyzing scores, stats and the history of the series.
I’ll stick with analysis for one more week. Picking only home teams would mean picking South Rowan to beat Concord, Northwest Cabarrus to beat West Rowan, and Hopewell to beat Davie, and while nothing is impossible where teenagers are involved, an invasion by Martians seems more likely.

PICKS:
EAST ROWAN (2-2, 1-1 SPC) at CARSON (2-1, 1-0 SPC)
What happened in 2015: Carson won, 14-6, at East, with defense, defense and more defense.
The series: Carson leads 6-4 and has won the last four, which means the Cougars have been winning whether they play in China Grove or in Granite Quarry.
History: Carson coach Joe Pinyan was 8-2 coaching against East in his decade at Salisbury High, and he’s 3-0 vs. the Mustangs since he switched to blue and orange.
Players to watch: Senior Max Wall, coming off a 279-yard explosion, is the guy for East. Carson has held Wall to a total of 151 rushing yards in his three previous games in the series.
Carson’s offense hasn’t set the world on fire, but cornerback Brenden Westbrook has helped out with two pick-sixes in the Cougars’ three games.
Notable: East is on the road for the fourth time in five weeks.
Pick: Carson 17, East 14

CONCORD (3-1, 2-0 SPC) at SOUTH ROWAN (0-3, 0-1 SPC)
What happened in 2015: South’s defense played well. Marshall Long, now a freshman at Georgia, punted very often and very well, but Concord prevailed, 19-0.
The series: Spiders lead 12-10-1.
History: South’s most recent win over the Spiders was in 1984. South gave Concord — and just about everyone else — trouble in the early 1980s.
Players to watch: P.J. Hall rushed for 122 yards for the Spiders against South last season. South QB Austin Chrismon is coming off a three-TD game.
Notable: This is the first road game for the Spiders. It’s a very early homecoming night for South. Selecting Concord for the homecoming opponent is interesting — and brave.
Pick: Concord 28, South 7

LEDFORD (2-2) at SALISBURY (1-3)
What happened in 2015: Ledford’s defense stifled the Hornets for a 26-0 victory.
The series: Ledford leads 9-8.
History: Salisbury thumped Ledford, 24-7, in 2008 but later forfeited that victory. Officially, the Hornets’ most recent win over the Panthers was a 24-21 comeback 10 years ago.
Players to watch: Ledford DB Coleman Reich picked off two passes against Salisbury last year. Salisbury’s offense managed a meager 44 yards against Ledford last season, but backs Nick Austin, Trell Baker and Marcus Corry should top that with no problem.
Notable: Home field hasn’t helped the Hornets so far. They’re 0-2 at Ludwig Stadium. Ledford has lost to two powerhouses but has handled two Central Carolina Conference teams. Ledford will be coming down from 3A to the 2A CCC in 2017.
Pick: Ledford 21, Salisbury 7

WEST ROWAN (2-1, 1-0 SPC) at NW CABARRUS (1-2, 1-1 SPC)
What happened in 2015: West blanked the Trojans until the fourth quarter and won easily, 34-6.
The series: West leads 19-7 and has won 12 straight against the Trojans. Northwest’s most recent win came in 2002.
History: When the teams squared off in Week 10 of the 2005 season, both still were undefeated. West won 14-3 in Mount Ulla in one of the most heavily attended games in county history.
Players to watch: West’s fierce defense, led by lineman Devin Turner, linebacker L.J. Robinson and cornerback Deyquan Byrd, may shut out the Trojans. Northwest’s sophomore QB I.J. Sturdivant is talented and a good runner.
Notable: Catawba grad Steven Williams, former West Rowan and North Rowan assistant, is the defensive coordinator for Northwest.
Pick: West Rowan 28, NW Cabarrus 7

NORTH ROWAN (3-1) at SOUTH IREDELL (2-1)
What happened in 2015: North got three punts blocked and lost to the Vikings, 40-14.
The series: North leads 8-1-1 and lost to the Vikings for the first time last season.
History: North’s most recent victory in the series came in 2004 when Sakelo Lilly passed for 244 yards and the Cavaliers won, 27-21,
Players to watch: North linebacker Victor Lyles has been special the past two weeks, with 16 tackles against Statesville and a pick-six for North’s only points against Davie. South Iredell junior QB Brady Pope was awesome last Friday in a 47-42 win against Mount Pleasant. Pope threw for 440 yards and four TDs and will test North’s secondary.
Notable: It’s the first home game for South Iredell, which has lost only to 4A Reagan.
Pick: North Rowan 26, South Iredell 21

DAVIE COUNTY (3-1) at HOPEWELL (1-3)
What happened in 2015: Davie rushed for 286 yards and thumped the Titans, 48-24.
The series: Davie leads 1-0
History: This will be Davie’s first trip to play the Titans in Huntersville. Hopewell opened in 2001.
Players to watch: Davie linebackers James Boyle and Cody Hendrix have combined for 19 tackles for loss. Davie QB Chris Reynolds is likely to rest an ankle injury. Central Piedmont Conference play starts for the War Eagles next week.
Notable: Hopewell has given up 155 points the past three weeks, after opening with a win against Garinger.
Pick: Davie 27, Hopewell 7