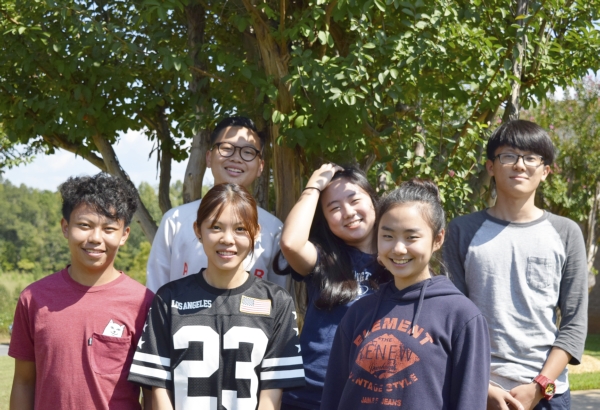 The students, all in high school, are bright and lively, cracking jokes and full of laughter.

“They just bring so much joy to the entire campus.” Nikki Eagle, director of marketing and communications at North Hills, said.

In the beginning, the Park sisters said it was hard to adjust.

“We knew how the culture was different than Korea, but still when you actually come here and experience, like, just the little things, it’s a lot different. You’ve just got to get used to it,” Zoey said.

Zoey and Jess are sisters, and said they also had two older sisters who attended North Hills as international students — it was how they knew about the school. They said their parents knew someone who had sent a child to North Hills in the past, so the Parks decided to send their own children to school there, on the other side of the globe.

Yuni and Mark Nie, also from Dongguan, came with the same exchange agency — along with fellow students Marco Chen and David Zhang. The group said that being an international student doesn’t feel so different from going to school in China.

Mark said that most schools in China are boarding schools, which he and the others have been attending since elementary school.

“So it’s not that different,” he said.

While living away from home may be familiar, the educational system is very different.

Marco said he felt like he was able to learn more in the U.S. Jess Park said that in America, students are in school for less of the day. In South Korea, she said, students stay at school most of the day, and spend years studying for a make-or-break test.

“It’s just putting all kinds of information in your head and you just have to memorize it,” she said.

And going to school in a different country comes with a lot of benefits. Zoey said she felt it helped her sharpen her English skills.

Jess added that the benefits weren’t purely academic, either.

“We can also learn cultures and see different perspectives and learn from it,” she said.

One of the biggest cultural differences the students agreed on was how people interact and form friendships in America versus Asian cultures. Mark said in China, he felt closer to people — even strangers — and it was easier to build relationships.

“But in America, you just don’t know any of the people in America. You feel lonely,” he said.

Jess Park said that forming friendships is much less spontaneous in South Korea — you become friends with people you feel you have a connection with.

“When you’re making new friends and interacting with new people there’s some kind of emotional thing . . . so you already have that connection,” she said.

But in America, the students said they felt that connection was missing.

“It was hard for me to get used to,” Zoey said.

And they like the small, close feel of a private school. They said they felt the teachers cared about them, and appreciated the individual attention they could receive in class.

Katie Campbell, director of recruitment, said the international student population has grown over the past three years. While seven out of 300 may be a small number, Campbell said the students are invaluable to the campus.

“We love the interaction that brings for our current family,” she said.