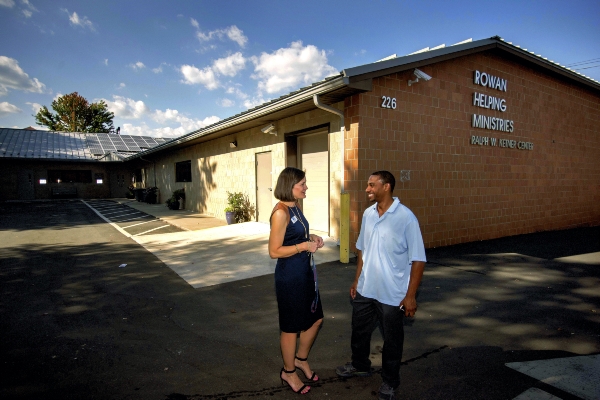 SALISBURY — A lot can change in 30 years, but at Rowan Helping Ministries there’s one thing that hasn’t — it’s still an organization built by and supported by the community. The nonprofit will celebrate its 30th birthday Sunday with the dedication and unveiling of the newly renovated Ralph W. Ketner Center.

And in that, too, the community has shown up. The Ketner Center opened in 1989, something that was possible only through the generous donations and hard work of community members. Its renovation is no different.

“We accomplish all that we do through cooperative community action,” Executive Director Kyna Grubb said.

After shelter services hopped across the street to the new Robertson-Stanback Center in May 2014, the employees and volunteers in the former shelter, soup kitchen and food pantry rolled up their sleeves and got to work. The original shelter building now houses Rowan Helping Ministry’s administration and crisis services.

“This is the meeting place where those who want to serve and those who need help come together,” Grubb said.

Grubb said that over the past two years, she’s found talent in unexpected places — whether it’s a doctor who volunteers to cap wall removals, or an employee who laid carpet in the administrative wing.

“It was people, sort of in all walks of like, doing their hobbies,” she said.

“We’ve done most of this through volunteers,” she said.

“That’s where you see God’s love — through those that are serving,” Dianne Scott, former executive director, said.

When Rowan Helping Ministries started 30 years ago, on Sept. 18, 1986, it was scattered around the county — an office here, a clothing center or a food pantry there — and was largely supported by local churches. But in 1988, the organization received donations from Cheerwine and Ralph and Anne Ketner that allowed them to build a new home at 226 N. Long St.

Over time, Rowan Helping Ministries outgrew its first home, sleeping more than 85 men, women and children in a building that was only designed to house 40 men.

“We were sleeping people in the conference room, the lobby and interview rooms,” Grubb said.

The organization still receives support from approximately 235 churches countywide, and now provides an average of 2,700 pounds of food from its food pantry per day.

The dedication will be held at 2 p.m. Sunday, with an open house of all facilities held until 5 p.m.

The celebration is just a few days shy of what would have been Food Lion founder Ralph Ketner’s 96th birthday. Grubb said that before he died, Ketner approved the dedication and was able to tour the building.