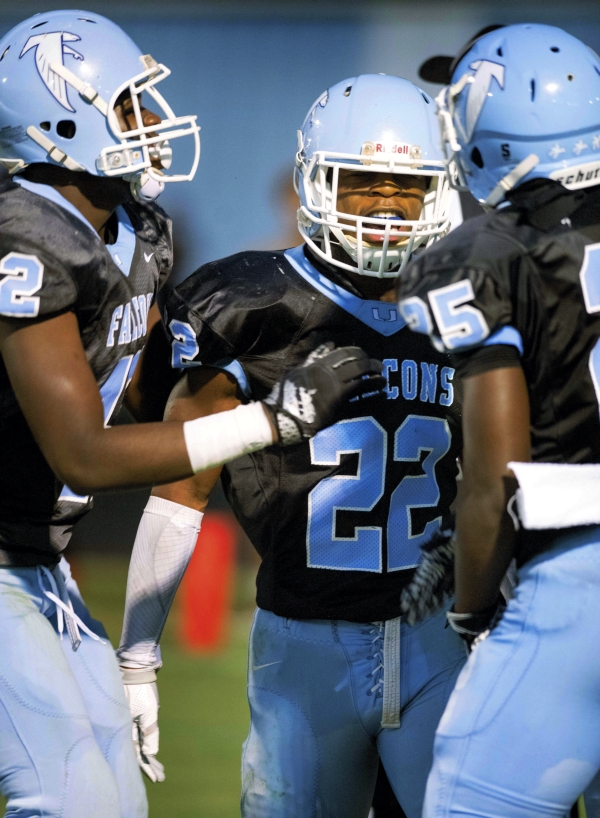 MOUNT ULLA — Gifted receiver Kortez Weeks put on a show on Friday as West Rowan beat Robinson, 21-19, and quarterback Payne Stolsworth turned in a fantastic performance for a rookie.
But at the heart of West’s victory was a tenacious defense led by Lawrence “LJ” Robinson.
“LJ is our ‘Eagle backer,’ and the Eagle is our leader and the guy we look to for all the calls and checks,” West coach Joe Nixon said. “He’s also the guy we want to lead us in tackles, and LJ is leading us.”
The pivotal play in the Falcons’ victory was an interception return by the senior linebacker for a touchdown late in the first quarter.
That might turn out to be a season-changing play, as West was in desperate need of a lift. The Falcons had lost 41-0 in their previous outing to Davie County and because of an open week had to dwell on that loss and hear about that loss for two weeks.
The Bulldogs led, 3-0, late in the first quarter and had just seized more momentum by stoning a West Rowan drive at the Robinson 5-yard line.
Robinson quickly moved out of the hole to the 25 with an effective running play, and then elected to throw on first down. And that’s when “LJ” entered the picture.
Robinson had three receivers to the right. QB Josh Dale was looking to throw short and never saw the linebacker wearing the No. 22 jersey stepping out to his left in a hurry.
“The quarterback was looking right at me, and I knew he was going to throw to my side,” Robinson said. “I was supposed to stay in the box, but I trusted my instincts. I made the right read and made my break on the ball at the right time, and we had a touchdown.”
It was a play that changed everything. West led 14-3 by halftime.
“LJ put us on the board, got us the lead,” Nixon said. “That was all him. Just a really good player making a play.”
When Robinson (6 feet, 205 pounds) was a sophomore in 2014, he was a running back, trying to earn carries for a team that had Harrison Baucom and Jovon Quarles getting most of the touches.
“My older brother Julian Samolu (a standout at West Rowan and Catawba) and Coach Kevin Parks came to me and told me the team needed me more at linebacker,” Robinson said. “I’ve always wanted to be like Julian, and I was fine with it. I made the switch in the middle of my sophomore year.”
The touchdown Robinson scored on Friday was his sixth for the West varsity. He had two offensive touchdowns in 2014, and he also scored that season against South Rowan on blocked punt.
He added two defensive scores as a junior — a fumble return against South and a pick-six against Cox Mill.
“He can really run and he can make the tackle when he gets there,” Nixon said.
Robinson also is smart. He studies film religiously, and it pays dividends. Besides the interception, he had several pass breakups and tackles for loss on Friday.
“I knew from film study that they’d run a screen every time they brought certain personnel in,” Robinson said. “I was looking for the screen and helped get a tackle for loss. I read the guards and I can tell if they’re pulling for a running play or getting ready to pass-block. You look for tendencies on film that will help you make plays in the game.”
Robinson made tackles all over the field on Friday, including one on a kickoff.
A play he enjoyed almost as much as his pick-six occurred with West facing a fourth-and-2 at its 43-yard line. As the punt team headed on the field, up in the pressbox, longtime clock operator Willie Ellis declared, “You know, back in the heyday, we’d fake the punt here.”
Indeed, the fake was on, and Robinson accepted the snap as the up man in punt formation and plowed for 3 yards and a key first down.
“I got the signal from Coach when I was going out on the field,” Robinson said. “It was kind of a surprise, but I was ready for it. It was like being a running back all over again, and I got the first down.”
Touchdowns and first downs are fun for Robinson, but he recognizes that his primary responsibility is to anchor the defense.
“Getting us in the right defense, getting guys in the right place and making sure they’re doing things right — that’s my job,” Robinson said.