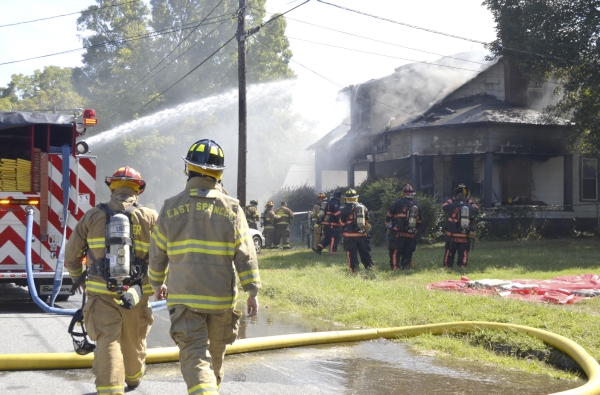 Multiple fire departments responded to this East Torbush Drive home where Pat "Mother Blues" Cohen has lived since 2005 when she fled the flood waters of Hurricane Katrina. She was grilling on her porch before the fire and only had time to grab her Boston terrier Bubbles who was on the porch after flames shot up to the roof. Shavonne Walker/Salisbury Post

EAST SPENCER — Pat “Mother Blues” Cohen stood in shock with friends and neighbors Wednesday while firefighters sprayed more water on her home of over 10 years as it burned.

Cohen, an evacuee of New Orleans in 2005, moved to East Spencer after losing everything during Hurricane Katrina.

Cohen said she had just cooked on the grill, which was on her front porch, when she went inside. Cohen didn’t recall whether she saw fire or smelled smoke, but she went outside to see fire creeping up toward the roof of her Torbush Drive home. The fire began shortly before 2:30 p.m.

She scrambled to search for her phone, but couldn’t find it and ran to get her 10-year-old Boston terrier, Bubbles, who was tethered on the porch. Cohen left the house in her bare feet. A neighbor who went to 210 Torbush Drive because she thought a relative’s house was on fire didn’t know Cohen, but saw the woman clutching her dog by a leash without shoes and took hers off. The young woman placed her brand new shoes on Cohen’s feet.

Someone called 911 for Cohen. Friends and family slowly began to gather as a neighbor got Bubbles some water to drink.

Cohen at times didn’t have words, but when asked what the community could do, she immediately said pray for her.

“I ask for prayers. Prayer does change things. I believe God did not bring me this far to turn now. Something great is getting ready to happen,” she said.

Cohen lost everything in the fire including the computer with all of her music. She has performed internationally, but Wednesday was headed to Magnolia Gardens where she sings regularly at the nursing home. She never made it.

When firefighters arrived, the house was fully involved, said Battalion Chief Chris Kepley. She said fire personnel attacked the fire from a defensive standpoint where the fire appeared to be mostly in the attic.

Kepley said there were no injuries reported.

The Red Cross is assisting Cohen and will accept any monetary donations on her behalf. Anyone who would like to make a donation to Cohen can do so with a cash or check made out to Pat Cohen. Contact the Hanford Dole Chapter of the American Red Cross at 704-633-3854 to make a contribution.