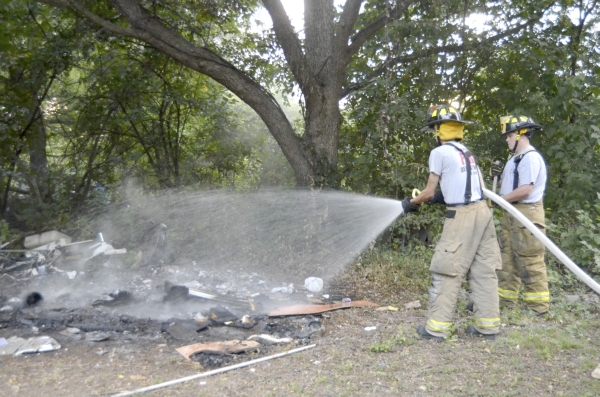 East Spencer Volunteer firefighters Chris Troutman and Dalton Burleson extinguish this grass fire beind a home undergoing repairs. The two part of the station's Bunk-in program, which ensures fire personnel will be at the station overnight and on the weekends. Volunteers of the program have helped decrease the average fire response times for the station since its inception. Shavonne Walker/Salisbury Post

EAST SPENCER — The siren wailed, signaling a fire call, but three of the six firemen at the East Spencer station were already on their way to the fire, just a few yards from the South Long Street station.

Two of them — volunteers Chris Troutman and Dalton Burleson — are part of the recently implemented “bunk-in” program that allows volunteers to stay overnight at the station, which guarantees fire personnel will be on site for fire response.

It’s one of the ways the East Spencer Fire Department has reduced its response times in the last two months. Fire Chief Josh Smith told the town’s Board of Aldermen at its planning retreat earlier this year there was a need for more weekend and night volunteers because the department wasn’t getting out to all medical calls.

He told the board the department was at the mercy of whoever was at the station or who could respond from home. He said there were times when they barely had the minimum number of people to respond, which is four.

In May, the average response time during volunteer hours, 5 p.m. to 9 a.m., was seven minutes 38 seconds.

The town board approved the hiring of part time firefighters, and the department has since instituted the bunk-in pilot program.

Smith said the improvements are much more significant than they initially anticipated.

“We have seen a substantial increase in the number of applications being submitted for both volunteer as well as paid staff positions,” he said.

Firefighter Chris Troutman has been with the East Spencer Fire Department for 16 months, and prior to that he was a volunteer with Ellis Cross Country. He spends the weekend at the station, volunteering from 10 p.m. Friday until 3 p.m. on Saturday. He goes to a full-time job and then returns to the station at 10 p.m. Saturday, staying until 3 p.m. Sunday.

“It helps us out a lot. I think every department should do it,” he said.

He said having fire personnel already at the station reduces the time they have to wait for volunteers to drive to the station and then to the fire.

Volunteers work eight-hour shifts or a weekend shift. There are currently five volunteers in the bunk-in program.

The program requires volunteers be certified and offers the opportunity to receive additional training. The East Spencer Fire Department has a mutual training agreement with the Salisbury City Fire Department.

Capt. James Miller said training with the city has been a benefit to the East Spencer station.

The fire department was recently awarded a grant through the State Fire Marshal’s Office Volunteer Fund to acquire 10 sets of turnout gear, 10 pagers, three portable radios and a new automated external defibrillator, as well as medical supplies. The total grant was $39,000 with a $19,500 match from the town.

Smith said the fire department hopes to hear soon whether they were accepted to receive a federal grant that would replace air packs. The grant requires a 5 percent local match, meaning the department would pay $7,500 of a $160,000 grant.

The station continues to undergo improvements, including widening the bay doors from 10 feet wide to 12 feet. The station plans to also upgrade to automatic door openers. Currently, someone has to physically open the garage-like doors and then drive the vehicles out of the station.

Smith said they’ve talked with various suppliers who are willing to assist the town with building materials, and others have donated supplies and materials including interior doors.

The fire department is working on establishing an auxiliary to spearhead fundraising efforts. The auxiliary is in the process of applying for nonprofit status. In the meantime, the volunteers are hosting a fish fry to benefit the department’s building fund.

The fish fry will be held Sept. 25 from 1 p.m. to 6 p.m. Volunteers are selling tickets in advance for $7. Tickets sold the day of the event will cost $8.

Anyone who would like to purchase a ticket or donate to the East Spencer Fire Department building fund can contact the fire station at 704-637-0580.