Bill Ward: Reflections on the loss of an old friend, a little friend 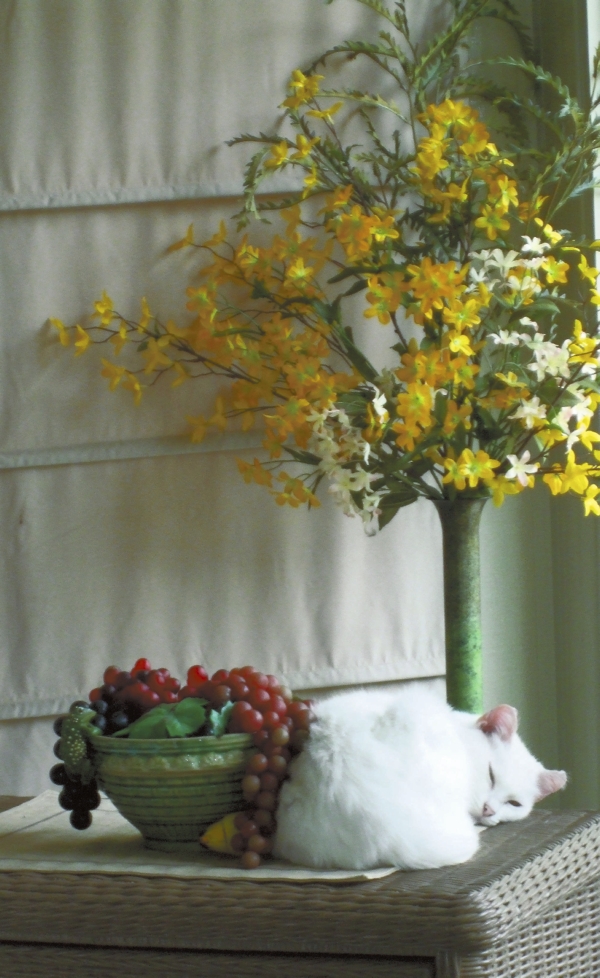 Chynna snoozes near a bowl of grapes. Submitted photo

It is with very heavy heart that I write this. It’s an obituary and one I was hoping never to do, but then, I knew I was just kidding myself. Nothing or nobody lives forever. Even now that I’m much older, as the old folks of the South used to say, I’m living on borrowed time.

Our cat’s name was Chynna. Sometimes I just called her “White Bread,” because both she and her mother were solid white. We adopted her from a friend of Celeste’s, who called wanting to know if we would like to have a kitten. We already had three cats, so we, more Celeste than I, agreed to come over for a look.

The deal was, I had to select a kitten that would be mine and mine alone. I was having some problems developing a peaceful coexistence with Celeste’s cats. I really didn’t care much for cats, but this was early in our relationship, and the mandate was, “Love me, love my cats.” It wasn’t quite the fair situation I thought it should be, but I did love her, so I went along.

We watched the kittens play. A couple of kittens were pretty little tabbies, but that was kind of ordinary. It was the solid white kittens that really caught my eye. As I watched them play and run around, one stood out from all the rest. I watched it —at the time, I didn’t know it was a little female — and that was the one I selected.

As we left to go back home, I put my new pet in my shirt pocket. That’s how itty bitty she was. Silly isn’t it? Then I made a remarkable discovery. Little cats have sharp claws, just like big cats. And she kept trying to dig in and claw her way out and up my chest, meowing all the while. She won. I removed her from my pocket, and she had the run of the car, while Celeste laughed at the situation.

That was 20 years and seven months ago.

When she was about 3 or 4 months old, we would let her out in our fenced-in backyard. I enjoyed sitting inside watching her play. A couple of squirrels-in-residence learned to keep up a good conversation with her. She would leap like a pro-baseball player, trying to catch flying insects. It was relaxing and a joy watching her play, kind of like watching a little child. She became so much fun. We enjoyed her antics enough to affectionately call her “the Brat Cat.” Sometimes, we un-affectionately called her that.

I don’t remember which winter it was. I just remember Chynna still wasn’t fully grown, and it was cold and snowy and icy. I was walking with crutches, so I was very careful. Chynna had gotten out, and had been gone for several days. We looked and looked, and whenever we went out, we would call her name with no response.

Coming in one evening, we both heard “meowing.” Our veterinarian surmised later that Chynna had likely been struck by a car. Though badly hurt — her right hind leg was severely fractured, and a couple of large chunks of fur were gone — she’d managed to crawl up the hill in our front yard and got snowed-in under a neighbor’s utility shed. To get back to us, she had to crawl out and scale the fence with her broken leg and move toward us in chest-deep snow.

We were overjoyed to see her. Since it was night, Celeste wrapped her in a big fluffy towel to keep her warm, and I held her snuggled up against me like a baby. We gave her warm milk through a small bottle, and she knew she was home again. And I knew that she really was my cat.

She was the bravest little cat I’ve ever seen, even when we took her to the vet hospital next morning.

She liked warmth and discovered that vents on top of my PC monitor emitted warm air. When I sat down to work at my computer, Chynna was on the monitor, watching me until she would go off to sleep. She has slept with me for a long time. As a disabled Navy Veteran, she has been my “service cat” and has gotten me through many surgeries. I would wake at night and feel something lying across my chest, and it would be my little cat girl.

Well, there are no more PC monitors to keep her warm, and there is no more Chynna. Finally, our current veterinarian told us her kidneys were failing, she was anemic, and she had endured a tremendous weight loss. There were things that could be done for her, but at her age ….

For a guy who couldn’t get along with cats, I surely do miss her. And I don’t think it’s going to get any better. I hope wherever she is now, she is plenty warm and has lots of flying insects to leap for.

Good night and good-by, little Chynna. We’ll never forget you. You were loved very much here. You always will be.