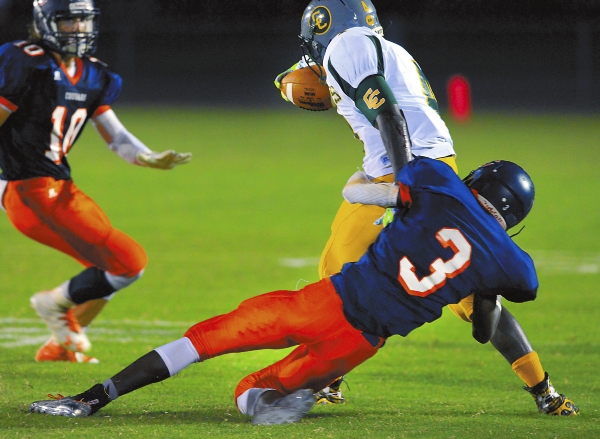 CHINA GROVE — Carson began playing football in 2006, and senior cornerback Brenden Westbrook accomplished something in Friday’s 31-14 win against Central Cabarrus that no Cougar had ever done.
The 6-foot-3, 170-pound Westbrook had an interception return for a touchdown and a kickoff return for a touchdown in the same game.
“He didn’t just do it it in the same game, those two scores came a few minutes apart,” Carson coach Joe Pinyan said. “He went a long way on both of them, and there were a lot of athletes in green and gold on that field chasing him. I’m sure he got a little bit tired.”
Long and lean, Westbrook looks more like a basketball small forward or a track and field jumper than a cornerback — and he’s proficient in both of those sports. He’s been a key man for Carson basketball for two seasons, and he competes at a high level in all three jumps in track — high, long and triple. A long strider, he’s also one of the county’s best in the 200-meter dash, and that speed shows up when he gets his hands on the ball on a football field.
“I’ve been getting a little bit of college interest in track, but not really anything in basketball,” Westbrook said. “But for football, I’ve been hearing from a lot of schools — Richmond, East Carolina, Appalachian State, even a little bit from Clemson.”
Westbrook, who hit the weights hard in the offseason, was sporting a red Richmond shirt on Wednesday, so it’s safe to assume the Spiders are one of his favorites.
Westbrook’s kickoff return TD was only the second in Carson history and the first since Daniel Yates broke loose against North Iredell in 2006.
Carson has had its share of pick-sixes. Westbrook’s interception TD on Friday was the 12th in school history, and he’s accounted for three. Dontae Gilbert, who starred for the Cougars in 2010 and 2011 before enjoying a fine career at Averett University, also had three.
Westbrook produced a pick-six against Salisbury in 2015 and set sail on another one against the Hornets earlier this year. He got his first one in a conference game on Friday.
Carson trailed Central Cabarrus, 14-10, at halftime, but Pinyan felt OK. The Cougars were playing tough on defense and they were getting the ball to start the second half.
Central’s kickoff went out of bounds. At the urging of defensive coordinator David Johnson, Carson declined good field position at the Carson 35 and opted for Central to re-kick.
Between kicks, Westbrook switched sides of the field with fellow returner Bailey Rayfield, moving from the left to the right. Then the short kickoff came in his direction. He waited for it to descend at the Carson 24. Then he took off.
“The ball fell right in my hands, and then things happened fast,” Westbrook said. “I saw teammates getting great blocks. I just cut off those blocks, and then I was in space.”
The go-ahead touchdown went on the scoreboard for the Cougars 12 seconds into the second half.
At the 9:18 mark in the third quarter, with Central’s offense trying to retaliate, Westbrook struck again.
“We were in Cover 3 and I was just back in my deep third,” Westbrook said. “They ran kind of a slant, but a deeper slant. Austin Cain, one of our spurs, tipped the ball, and then I saw it coming to me.”
Westbrook grabbed the deflection at the Carson 30, cut off his blocks again — and was gone again.
“Pretty tired after that one,” Westbrook said with a grin. “I didn’t go back out there for the kickoff.”
Westbrook had turned a 14-10 deficit into a 24-14 lead in a matter of minutes, and the Cougars were headed for a huge win in their South Piedmont Conference opener. Carson had never beaten Central Cabarrus.
Maybe the most interesting thing about Westbrook’s night was that his best football play went almost unnoticed — except by the coaching staff. Reviewing tape of the game, Pinyan was thrilled by a play Westbrook made in the second quarter.
“They’ve get a back out in space — and Central’s got very good backs — and the back kind of knocks Brenden off him with a stiff-arm,” Pinyan said. “But then Brenden keeps coming and he makes a great, open-field tackle. I think that play told a lot. That play said we were not gonna quit, and I think that play set the tone for what happened in the second half.”
Watching that play, Westbrook, an easygoing, mild-mannered guy off the field, was a little surprised by his own tenacity.
“Seeing the film, I almost lost a step to the back, but then I fought my way back in the play,” Westbrook said. “That tackle made it third down, then we stopped them, and they had to punt.”
Good cornerbacks may be the toughest thing for high school coaches to find, but the Cougars have a gem.
“It takes a special breed to play that position,” Pinyan said. “You make a mistake, and the other guys are striking up the band.”
Pinyan confessed that the Cougars, who don’t like to play guys both ways, will be using Westbrook more as a wideout in the future.
“We tried to throw a pass to him on Friday, but we led him out of bounds with it,” Pinyan said. “He’s capable of getting a touchdown trifecta one night — offense, defense and special teams.”
Westbrook did something rare on Friday. No Rowan County player had scored on an interception and a kickoff in the same game since North’s Trae Clark did it in a 74-0 rout of South Davidson in 2012 — but it didn’t change Westbrook any. He’s still convinced he didn’t do anything special. He believes he just did his job as part of a good defense.
“I went home and didn’t think much about the touchdowns,” Westbrook said. “I just really like playing the games, and I was already looking forward to the next one.”

With a win under their belts, Blue Bears take…