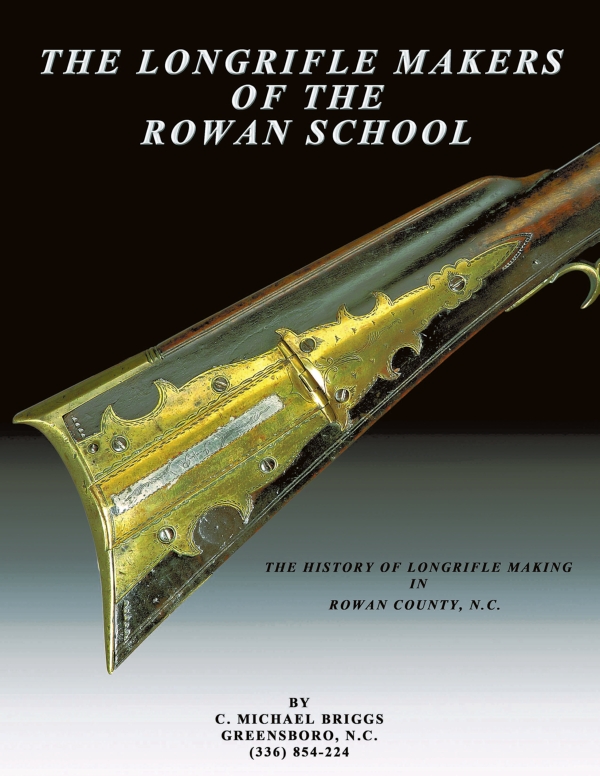 Cover of 'The Longrifle Makers of the Rowan School' by C. Michael Briggs.

SALISBURY — The research took several years, but for C. Michael Briggs and other longrifle enthusiasts, it was worth the wait.

Briggs has published “The Longrifle Makers of the Rowan School,” a specific look at the history of longrifle-making in Rowan County. The $40 spiral-bound publication has 86 pages of text, accompanied by 97 pages of color photographs and the documentation behind his research.

Those color photographs concentrate on the distinctive details of Rowan longrifles.

“The gunsmiths of the Rowan Longrifle School achieved one of the most individualistic and highest art forms to be found in North Carolina,” Briggs writes. “The best longrifles from this school are very prized today by museums and collectors for both their history and decorative art aspect.”

Briggs delves into the art and architecture behind the longrifles, lists the 30 known gunsmiths who made them, plots out where the gunsmiths lived in Rowan County, tries to identify known Rowan School longrifles still in existence and details the nine “schools” making 18th and 19th century longrifles in the Piedmont and western parts of North Carolina.

The nine longrifle schools operated between 1770 and 1830.

“The earliest made North Carolina longrifles,” Briggs writes, “are hard to identify as they look like Pennsylvania and Virginia longrifles.

“The gunsmiths did not change their style when they moved across the state line. As the new gunsmiths settled into the different areas of the Piedmont in North Carolina, they developed regional styles that became their local schools.”

Turning the pages of Briggs’ book, you quickly learn the nomenclature behind the longrifle and its features, including things such as patchboxes, lockbolt sideplates, double-set triggers, comb lines, barrel tangs and butt plates.

In the Rowan School of gunsmiths, three key subgroups emerge — the longrifles of the Bruner family, the Eagle-Ribelin-Nash longrifles and the longrifles of Jacob Crider, John Waisner Jr. and a still unidentified craftsman within that subgroup..

Briggs says it’s impossible to know how many rifles were produced by the Rowan School.

“I feel certain it numbers in the hundreds,” he writes in his new book. “To date, I have seen less than 40 rifles that have survived.”

Part of Briggs’ research goes into the mysteries of the Rowan County gunsmith identified on his longrifles by the letters “L.N.”

Briggs often is asked about the value of Rowan longrifles still in existence. (The Rowan Museum has three as part of its permanent collection, and Briggs, a collector, owns three himself.) Briggs says prices can range from less than $200 to “tens of thousands” of dollars.

For collectors, two items adding the most value are a patchbox and relief carvings, Briggs says.

Briggs also received help from Ben Ribelin, who provided photos of Isaac Ribelin and his house; Cathy Rufty, who gave genealogical information on the Bruner family; and Levi Coldiron, GIS coordinator for the city of Salisbury, who helped in creating a map of the Rowan gunsmiths.

With this book on Rowan longrifles and one on Mecklenburg School longrifles, Briggs has published six books. Four relate to longrifle schools, one to N.C. banded powder horns and another to Guilford County’s history during the Civil War.

When he’s not giving programs on longrifles and banded powder horns, Briggs is president and chief executive officer of Call Coverage Inc. He lives in Greensboro and is a member of the Historical Arms Collectors of the Southeast, the Kentucky Rifle Association and the American Society of Arms Collectors.

Briggs says he has spent the past 35 years collecting, studying, researching, writing and giving programs on N.C. longrifles and powder horns.