Editorial: Our state in the spotlight 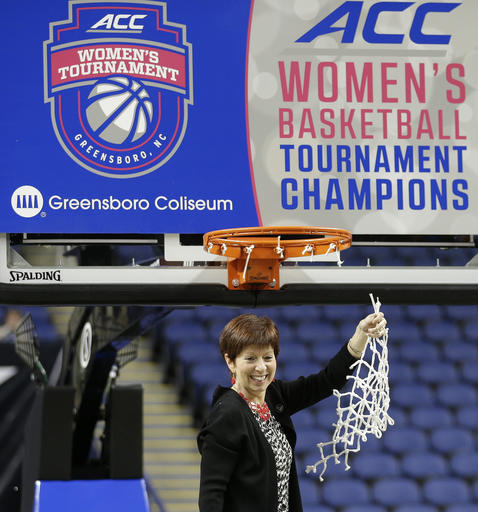 Notre Dame head coach Muffet McGraw celebrates after an NCAA college basketball game against Florida State in Greensboro in 2015. NCAA President Mark Emmert says it's up to the Atlantic Coast Conference and its members whether to follow the association's lead and pull events out of North Carolina because of a state law that some say can lead to discrimination against LGBT people. AP photo

One hundred years after black veterans of the Civil War first pushed for a museum honoring their service, the dream has materialized. The Smithsonian’s National Museum of African American History and Culture now has a permanent place on the National Mall in Washington, D.C.

Among the obstacles the museum faced was North Carolina’s Sen. Jesse Helms, who lives again in video footage being shown in reports about the museum this week. “Once we approve this museum, we will be called upon by other minority groups, and they will be justified in doing so — to provide museums for their particular groups,” Helms argued in a committee hearing in 1994, as if African Americans were just another minority. It was a small-minded but temporarily successful stand.

On Monday, the NCAA announced it was pulling seven championship events scheduled in North Carolina for 2016-17 because of House Bill 2. The state law restricts transgender bathroom access and limits the civil rights of the LGBT community, though proponents tend to sensationalize its purpose in very different terms. In a campaign ad, Gov. Pat McCrory asks why opponents are “pushing to make our schools allow boys to use the girls’ locker rooms and showers.” State GOP spokeswoman Kami Mueller went an absurd step further, suggesting that, by citing HB2, the NCAA was opposed to having women’s bathrooms and locker rooms.

Nothing fully compares to the struggles endured by African-Americans throughout U.S. history, but the opening of the museum and the NCAA decision are alike in one regard: both throw a national spotlight on bids by North Carolinians to hold up or even reverse social change. Neither is a proud moment for the state.

A growing list of individuals and organizations see North Carolina’s “bathroom law” as a threat to fair and equitable treatment, and they don’t want to be associated with it. Mark Emmert, NCAA president, announced the group’s decision: “We believe in providing a safe and respectful environment at our events and are committed to providing the best experience possible for college athletes, fans and everyone taking part in our championships.”

Attendance at NCAA basketball games topped 32 million in 2015-16, so NCAA officials know something about security. Yet the organization feels fans and athletes are better off in an environment free of HB2. Other states have similar laws, but the NCAA says only the North Carolina law goes so far — overruling any local law that treats sexual orientation as a protected class, and providing legal protection for government officials who refuse services to the LGBT community.

Gov. Pat McCrory and like-minded politicians see a left-wing conspiracy in the growing list of HB2-inspired boycotts. On Tuesday, McCrory struck a somewhat neutral tone, saying gender and privacy issues will be resolved in the U.S. Supreme Court and urging everyone to hold off on further action for now. But his campaign ads are not waiting, and neither is the NCAA schedule. Time waits for no one, not even the Supreme Court. How will North Carolina look when this moment is played back to us 20 years from now?