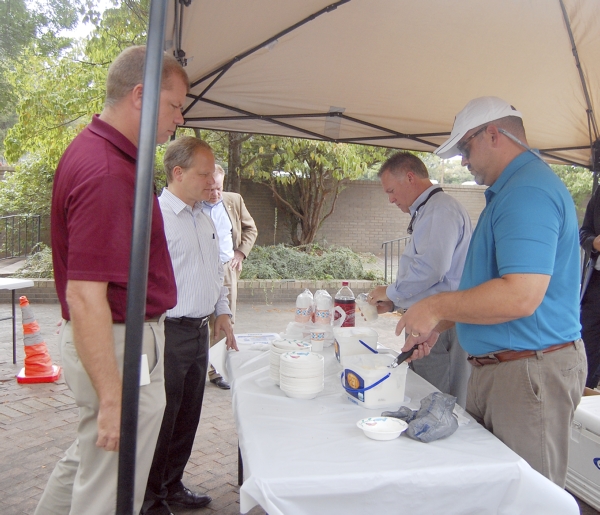 Aaron Church (far right), county manager, and Greg Edds (2nd from right), Rowan County Board of Commissioners chairman, served city employees ice cream on Monday. The county and city manager bet that whichever government had the largest percentage increase over the previous year's donation for the Rowan County United Way campaign would be served ice cream by the loser, and the city government ended up winning the bet. Amanda Raymond/Salisbury Post

SALISBURY — Last year, the city and county managers made a wager for the United Way fundraising campaign.

“We just encouraged people to give as they could,” Bailey said.

Church said they did similar things at the county level. Employees were also offered prizes and other incentives.

Bailey and Church said they hope to make another bet this year.

“Except the county’s going to win,” Church said.

Kellie Cartwright, a grant writer for the county, was manning the condiment table.

She said the loss would be motivation for the county employees to do better this year.

“It’s friendly competition, and we have fun,” she said. “And that’s a good thing.”

Cartwright said it was good that the city and county were working together to give to the United Way, and serving ice cream was a small price to pay for all the good they ended up doing for the community.

“If serving ice cream increases giving to the United Way, I’m all for it,” she said.

Scott Trexler and Blake Jordan, employees at Salisbury-Rowan Utilities, sat in the shade to enjoy their scoops.

Trexler said he and Jordan helped with site assessment for the United Way’s Day of Caring.

“It’s a good cause,” Trexler said.

Trexler said city employees will just have to donate more to beat the county again this year.

“We all love competition,” Jordan said.

Jackie Harris, resource development and marketing director for the United Way, said she thought it was a great idea to insert a little competition into the fundraising. Both campaigns increased from the previous year’s donation.

Harris said she appreciated the hard work and donations from both governments.

“I hope this year the campaign will do well again, and I’m sure they will,” she said.

Bailey and Church said they hope to make the wager an annual tradition. Bailey said the United Way provides valuable resources for those in need all over the community.

“We’re proud to be a part of the United Way,” he said.