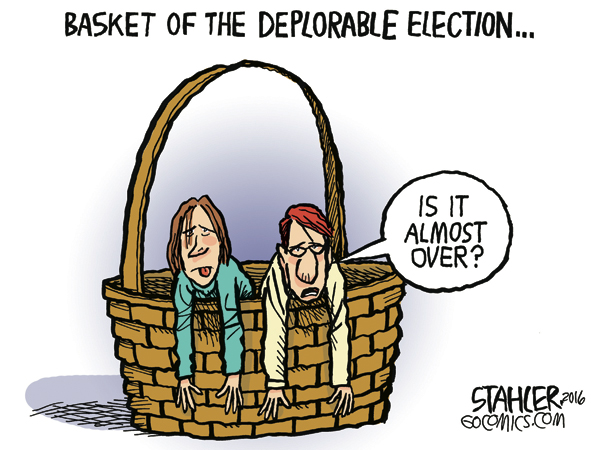 Every now and again secular progressives rip off their mask and tell conservatives what they really think of them. At an LGBT fundraiser last Friday in New York, Hillary Clinton one-upped President Obama, who said of conservatives during the 2008 presidential campaign: “And it’s not surprising then that they get bitter, they cling to guns or religion or antipathy to people who aren’t like them or anti-immigrant sentiment or anti-trade sentiment as a way to explain their frustrations.” That came to be known as the “bitter clingers” speech.

Hillary Clinton said: “You can put half of Trump supporters into what I call the basket of deplorables.” She then said that some of these people were “irredeemable.” After strong pushback, presumably from some of the “deplorables,” Hillary Clinton partially walked back her remarks. She said she had been “…grossly generalistic and that’s never a good idea. I regret saying half — that was wrong.”

How many, then? One-quarter? One-third? Ten percent? And how does she arrive at such a figure?

This is the contempt in which it seems the left holds traditional Americans. Anything they say “no” to is to be labeled racist, sexist, misogynist, xenophobic and nativist. To the left, anyone who does not share “modern” ideas is to be condemned, even called unAmerican and deplorable.

Clinton’s remarks remind me of what Washington Post writer Michael Weisskopf wrote about evangelical Christians in the early ‘90s. Weisskopf said they were “mostly poor, uneducated and easy to command.” That produced a torrent of critical letters and phone calls to the newspaper, prompting Ombudsman Joanne Byrd to explain the reasoning behind Weisskopf’s statement was that most journalists don’t know any of “these people.”

The two comments prompted scores of evangelicals to send their resumes to the newspaper, showing degrees, even doctorates in various fields.

In a statement released by the Republican National Committee in response to Clinton’s remarks, Chairman Reince Priebus said, “Insulting everyday Americans to a group of wealthy donors shows whose priorities Clinton really has in mind and exposes the hypocrisy of a candidate whose stated desire to unite the country is clearly all for show.” Priebus went on to accuse Clinton of “condescension and “disrespect” to her fellow citizens.

Half of them anyway.

Name-calling on both sides prevents us from hearing what solutions to America’s manifold domestic and foreign challenges the candidates propose. Perhaps the upcoming debates will help focus their and our minds.

Bad language in politics is nothing new. The 1800 presidential race between Thomas Jefferson and John Adams, who are now held in high regard as statesmen, was the beginning of what we now call negative campaigning.

In addition to the often scurrilous things they said about each other, Adams and Jefferson had surrogates who attempted to outdo them.

As Rick Ungar wrote in 2012 for Forbes magazine, the president of Yale University, a John Adams supporter, suggested that if Thomas Jefferson were to become president, “We would see our wives and daughters the victims of legal prostitution.”

A Connecticut newspaper, notes Ungar, warned that the election of Jefferson would create a nation where “murder, robbery, rape, adultery and incest will openly be taught and practiced.”

Not to be outdone, James Callender, “an influential journalist of the time … wrote that Adams was a rageful, lying, warmongering fellow; a ‘repulsive pedant’ and ‘gross hypocrite’ who ‘behaved neither like a man nor like a woman but instead possessed a hideous hermaphroditical character.’”

Deplorable, but redeemed in the minds and hearts of their countrymen; I’m doubtful the same will be said of the current presidential candidates 200 years from now.