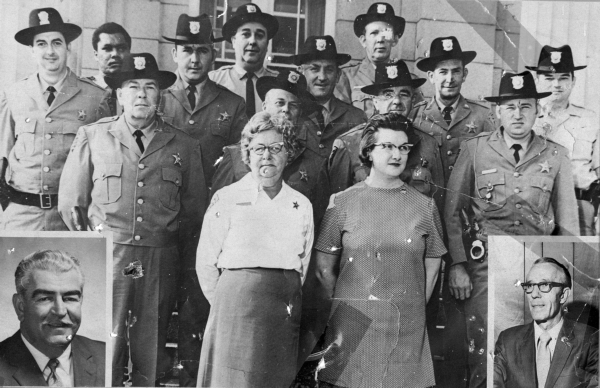 Fred Trammell of Kannapolis provided this photograph of members of the Salisbury office of the Rowan County Sheriff’s Department in 1970, when John Stirewalt, lower left inset, was the sheriff and Charlie Herion, lower right inset, was chief deputy. Trammell, now 74, was a 28-year-old deputy then. That’s him at the far right of the second row. This photograph was used as part of a 1970 calendar, and Trammell tried to identify as many people as possible. The women in the front row, left to right, are a Mrs. Anderson, and Trammell wasn’t sure of the second woman. Others pictured included in the second row, left to right, Mr. Walters, Ralph Gobble, Carl Taylor and Trammell. The rest in back, left to right, include Sherrill Dancy, Albert Stout, Doug Lefler, Pless Cauble, Clyde Fink, R.J. Shaw, Gene Stirewalt and Mr. Douglas. John Noble of East Spencer was a member of the department at that time but was not present for the photograph. Trammell worked for the department from 1968-70 before leaving for a job at Cannon Mills, where he became a supervisor in the weave room. Later, he worked at Duke Power’s McGuire Nuclear Station as part of its security force.