Sleepy driver likely the cause of West Horah Street crash 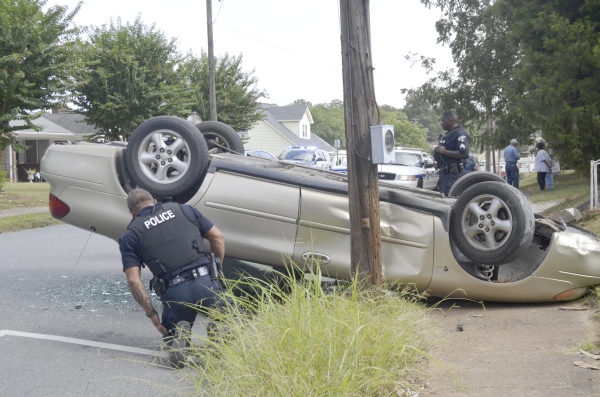 SALISBURY — It’s not clear why the driver involved in a car crash ran from the scene of the accident, but police say they believe he feel asleep at the wheel.

The driver of the Ford Taurus was taken to the hospital by ambulance.

Salisbury Police Officer Matt Benjamin said it’s possible the driver, whose name was not immediately available, dozed off, went off the road to the right, overcorrected and hit concrete steps just above the sidewalk. He said after the vehicle ran onto the concrete steps, it overturned.

Witnesses said the driver managed to crawl through the rubble and run to a nearby house where he banged on the door saying he needed to check on his father. Ashley Stallworth, who lives a block from where the crash happened, said the driver apparently went to the wrong home and then ran behind another home.

Police took off after the man and caught up to him near a barbershop located at the corner of West Horah and South Craige streets. He was placed inside a waiting ambulance.

Stallworth said the man was bleeding and began yelling, “I need an ambulance.”

Witnesses saw a white van leaving the scene shortly after the crash, but police determined the van had nothing to do with the crash. Benjamin said there was no damage to the vehicle consistent with a two-vehicle collision. The only damage the Ford Taurus had was from the impact with the concrete steps, overturning and damage from a utility pole where the car landed on its top in front of 827 West Horah St.

Sandra Arrington said she was at a neighbor’s house just a few yards from the crash when she heard a loud noise from outside.

“I was in the house and heard a boom. I came out and saw the car. I thought it was a bomb,” Arrington said.

She said the force of the crash shook the house. The car was smoking when Arrington made her way outside. She said she also saw the white van and thought it was involved because the driver of the van took off rather quickly.