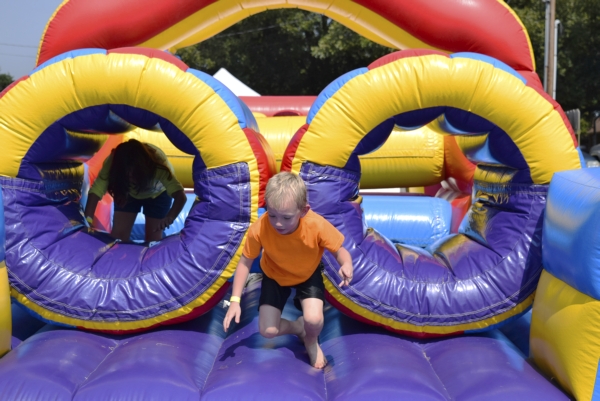 ROCKWELL — It’s been nearly four years since Rockwell has had a community event, town officials said.

“The surrounding communities all seem to have a community event,” Terry Peirsol, town volunteer and festival organizer, said, “and here we sit in Rockwell and we haven’t had anything for four years.”

The town used to host a small, annual event called “Music in the Park,” but it petered out a few years ago — it’s been nearly 10 years since the town has had a large festival or event of any kind. This year, the town decided to change that.

On Saturday, cars driving down US Highway 52 slowed down as they passed the collection of tents and booths filling the front lawn of Rockwell Elementary. The first ever “Rockwell Fest” featured crafts, food and bounce houses for kids.

Chipping away at that issue is what prompted Peirsol and fellow town volunteer and festival organizer, Linda Sherrill, to hold the event. It took them nearly a year of planning, Sherrill said.

One of the issues with previous town events was that they were held at Rockwell Park.

“It was kind of off the beaten path,” she said.

People often had difficulty locating the park, which is set far from the main road in a residential area. But hosting an event on the grounds of Rockwell Elementary, which borders high-traffic Highway 52, gives the festival “curb appeal,” Peirsol said.

Sherrill said she hoped the event would showcase Rockwell as a “small, fun town.”

Attendance was sparse but steady, and visitors who braved Saturday’s heat could sit and listen to local bands, or watch performances by local dance studio Dimension Dance Arts. The festival also featured several contests, including a doggie dress-up contest, a hot dog eating contest and a senior beauty contest. More than 30 local businesses sponsored the event or attended as vendors.

But the event also functioned as a fundraiser. While the event was free to attendees, the town charged a low fee to erect a booth, and ran a ticket raffle during the day. The proceeds from both will be used to purchase new playground equipment for Rockwell Elementary School, Sherrill said. The festival raised approximately $1,500.

Rockwell Mayor Beau Taylor said the proceeds went for a good cause.

“I’m just proud of them,” Taylor said of Peirsol and Sherrill.

Organizers said they hope the festival will persist, but if not, they hope it was a fun day for the community.

“I just did it for fun . . . to bring the community together,” Sherrill said.