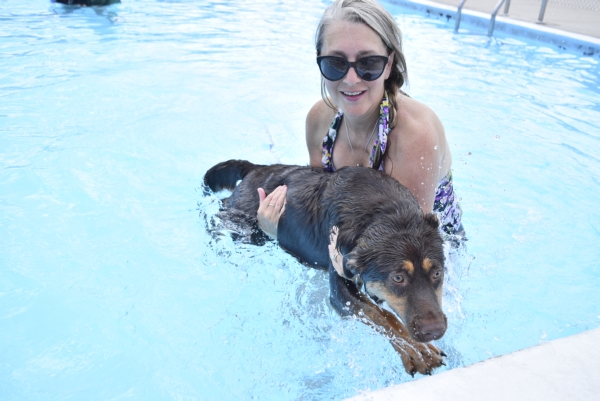 Theresa Pitner, dog trainer and director of Dog PAWS, helps Leia, a 9 month-old lab mix, out of the water. Leia was one of several dogs who attended the first ever "Doggie Dip" at Fred M. Evans Pool. Rebecca Rider/Salisbury Post

SALISBURY — A group of dogs bounces and bounds around the edge of the Fred M. Evans Pool. From the water, Theresa Pitner pauses and points at the group.

Pitner is a dog trainer and director of Dog PAWS, a non-profit agency that aims to erect dog parks around Salisbury. PAWS stands for “parks and walks.” Over the past few years, the group has been raising money to build Salisbury’s first leash-less dog park in the 200 block of Martin Luther King Jr. Boulevard, next to the Salisbury Civic Center.

Dog PAWS has raised awareness and drummed up support, operating two- and four-legged 5k’s and, as of Sunday, swim parties.

While the Fred M. Evans pool saw its last two-legged swim day over Labor Day weekend, Salisbury Parks and Recreation kept the location open another week so that the dogs could have their day.

The event charged $5 per dog, with the money going to Dog PAWS and the construction of a new dog park, but Pitner said it served another purpose.

“People need to get their dogs out of their houses and swimming,” she said.

Swimming is good exercise for dogs as well as people — it’s a good workout and easy on the joints. And by trying something new, it will help a dog build up his or her confidence.

But sometimes, they needed a little extra help.

Whether they’d planned to go swimming with their pooch or not, owners hopped into the water — often fully clothed — to encourage reluctant dogs to take a swim. Many cradled their dogs, supporting their stomach and body, while the pets figured out how to put the “dog” in doggy paddle.

Pitner said that the middle of September is the perfect time to host a dog swim. Families often get preoccupied with adjusting to school schedules, and dogs may get stuck inside the house.

“But the dogs still need to get out, too,” she said.

On Sunday people traveled from Spencer and Cleveland with their furry friends to take a dip. The dogs swam in shifts based on size, with smaller dogs getting first claim to the pool, and large dogs going last. Owners had to sign a release of liability, and all participants were required to have updated rabies vaccinations.

In the water, Leila Faries held a struggling English bulldog named Boo. When asked why she chose to come to the swim party, Faries said, “Why not? It’s awesome!”

The Wrights brought their 9-month-old rescue dog, Leia, but said they hadn’t realized they would be able to swim with her. They let Pitner coax Leia into the water to perfect her paddle.

Attendance for the event wasn’t high, but Pitner said a smaller number of dogs in and around the pool was better — it let them, and their owners, socialize without stress.

Many dogs made new friends at the event, while their owners were able to chat with other people who loved dogs. Pitner said she and Dog PAWS plan to host another “Doggie Dip” next year.

“I think this is a fun thing to have,” Pitner said.