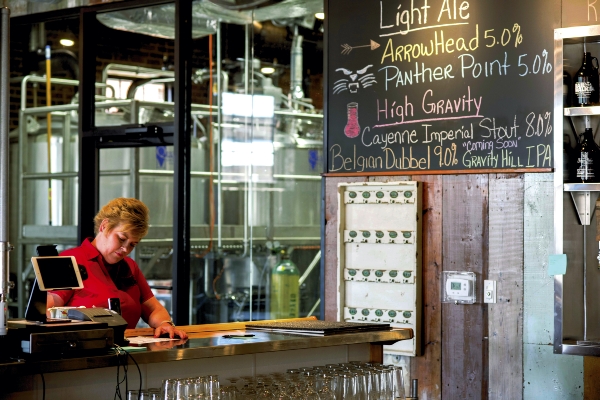 “It’s perfect,” said Tommy Baudoin, owner of the new brewery with wife Amie. “We’ve got some beer we brewed in the fermenter. It looks like everything is coming on and turning off like it’s supposed to.” The couple also owns Morgan Ridge Vineyards & Brewhouse in Gold Hill.

Tommy has been thrilled with the response from Salisbury and Rowan County. “The support … has been fantastic. Everybody has been excited about what’s going on and that’s what makes it all worthwhile.”

Builder Alfred Wilson incorporated tin from an old barn roof that belonged to a friend of Amie’s. The wood on the walls is reclaimed from a house in Montgomery County, and the siding in a smaller room is salvaged from a Stanly County house.

“From the start we wanted a relaxed atmosphere, we wanted to recycle stuff, we wanted it to look just like this,” Tommy said.

In April 2015, the Baudoins were getting ready to go to a brewers’ conference in Portland, Ore., when Amie lined up a meeting with John Ketner and James Meacham. Tommy knew he wanted to open a brewery, but didn’t know where. With incentives, a good lease and plenty of space, an old warehouse on Lee Street became the big project.

“The mayor, the city council, the county commissioners, everyone was so positive about getting us in here,” Tommy said.

On Wednesday afternoon, employees were arriving, and Amie and Tommy were taking care of last-minute details, bringing wine from the vineyard, finding a place outside for temporary signs.

Inside, an area at the front of the main room can become a stage. The brewery equipment is clearly visible through glass doors, and outside, a large grain silo marks the spot.

Beer will be available in a tasting flight — a sampling in 5-ounce glasses, in pints, in Belgian beer glasses and in growlers. Patrons can buy wine, but no wine tastings are planned at the brewery.

Amie bought framed photos at the Ryan’s restaurant auction, all with a train theme. She also got a print of Cara Reische’s painting of Salisbury’s train depot.

The railings outside are real pieces of train rail, painted, but still showing signs of wear and tear. Most of the furniture they bought at auctions.

Amie traveled around the country looking at other breweries for ideas for the interior. It’s rustic, but clean, with a polished dark concrete floor. She’s loves the sinks in the bathrooms, also poured concrete, in a trough style, just like the ones she saw at a place in Detroit.

Amie emphasized that this is a brewery first, then an eatery. Twenty taps line the stainless steel wall behind the bar, with one just plain water, “For people who feel the need to hydrate,” she said.

Favorites like Flat Creek Swamp Water and River Dance Red are among the offerings, with a cayenne imperial stout in the future. Nikki Koontz is the brewmaster.

Their beer menu will change with the seasons, as will the food. They can add nitrous to the beer to make it creamier, and will offer two versions of some of the beers.

Jason Nain, chef for Morgan Ridge Vineyards, designed the eatery’s menu with input from Tommy and Amie, incorporating some favorites from the winery.

“We tried to keep things simple, fun and clean with a variety. Everyone can find something they might be craving,” Nain said.

Some of the special items are homemade pork rinds served with white truffle pimiento cheese and duck wings with a Morgan Ridge Merlot Thai Chili Sauce.

The shrimp etouffée and shrimp po’ boy are nods to Tommy’s Cajun side.

“We’re doing small plates so you can come with your friends and everyone can order something different and share,” Nain said.

The emphasis is on local food and farmers, such as Wild Turkey Farms Beer Braised Brat. That’s why food will change with the seasons, to keep up with what’s available. “It’s a constantly evolving menu,” Nain said.

What was once a mudhole is now a paved parking lot, which has improved the look of the whole area. The brewery is on the Lee Street side of the building. The entrance is at the back, off the parking lot, which is accessible from Cemetery Street or from the Emporium parking area next to the railroad tracks.

Initially, the hours will be Wednesday and Thursday, 4-10 p.m.; Friday and Saturday, 11 a.m. to 11 p.m.; and Sunday noon to 10 p.m. They’ll also coordinate with events at Lee Street theater, accessible by a brick walkway from the new brewery and eatery.