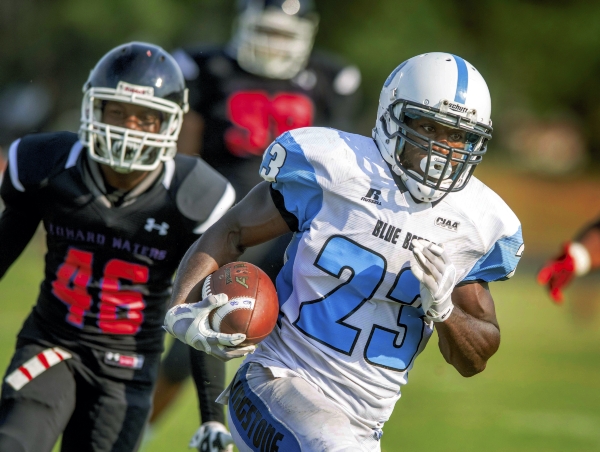 SALISBURY —It appears the red alert on Monroe Street is over — even if Livingstone coach Daryl Williams insists there’s still a ton of work to do.

One week after suffering an unexpected loss at Benedict College, the Blue Bears rebounded with an uneven, 31-28 win over Edward Waters in Saturday’s home opener.

He’s right. Livingstone enjoyed its first winning season in 17 years last autumn, then fell to the occasion in its 2016 debut. “That gave us a sense of urgency,” said defensive tackle Jabrel Anderson. “We know what it takes to win and we don’t like the taste of losing.”

Anderson, a 300-pound sophomore from Niagara Falls, N.Y., did his part to keep losing off the menu. He recovered a second-quarter fumble — one of three forced turnovers by the LC defense — and preserved the victory when he blocked a 37-yard field goal attempt by Paolo Golemi with 2:31 remaining. It was a pivotal play that thrilled the sun-splashed crowd of 1,459 at Alumni Stadium, but not Williams.

“Those guys are on scholarship….that’s doing what they’re supposed to do,” he said. “That’s our thing, do your job.”

EWC (0-2) used a last-minute, 70-yard touchdown pass to build a 14-10 halftime lead before Livingstone’s offense rolled up its sleeves, grabbed its lunch bucket and went to work. An interception by defensive back Gregory Hines set up the first of three LC touchdowns in the third quarter — each scored by junior Jarius Richardson.

“I knew I had to play better after last week,” he said after rushing for 96 yards. “I was making the wrong reads. This week I had to play smarter.”

Livingstone managed only eight yards on the ground against Benedict but picked up 153 yesterday. Right guard William Odomes offered an insightful explanation.

“No one was talking last week,” he said. “This week in practice we worked on communicating better and trying to bond. We’re building chemistry, but it always goes back to DYJ. Everyone is accountable.”

Richardson, pulled from the starting lineup in favor of Latrell Flowers, was first in line. He gave Livingstone the lead for good when he took a handoff from freshman quarterback Thaddeus Bell and scored on a 15-yard run behind 6-foot-6 left tackle Michael Green early in the just 24 seconds into the second half. Moments later, following an EWC punt, he capped a 9-play, 77-yard touchdown drive by following center Ronald Corley III into the secondary, then skirting untouched into the end zone on a 26-yard run.

“A shout-out to the OL,” said Bell, who made his first start memorable by passing for 196 yards and tossing a second-quarter TD pass to California native Spencer Ludin. “The linemen held their blocks longer and the running backs hit the holes. We came together as a unit.”

LC’s lead bulged to 31-14 when Richardson took a pitch-out on the left side and raced into the end zone a 20-yard burst, giving him three touchdowns in less than eight minutes. “But even with that lead,” he said, “we knew we had to keep playing. Anything could happen the way their offense was executing.”

Indeed, EWC scored touchdowns late in the third period and early in the fourth and trimmed its deficit to three points. The Tigers approached the gates to the end zone again following an interception in LC territory by DB Kennard Mahone with 5:58 to play. But the drive stalled at the Livingstone 20 before Anderson’s big right hand settled the matter.

“If it was a one-point win I would’ve taken it,” Williams concluded. “The first touchdown and the first win are the hardest to get — and we got both of them today.”

NOTES: Livingstone plays at Davidson next Saturday before hosting Chowan in its CIAA opener of Sept. 24. … Elusive EWC quarterback Tyler Mahla passed for 139 yards and two touchdowns and was the game’s leading rusher with 152 yards. … LC went 3-for-4 on fourth-down conversion tries. … Linebacker DeMarcus Nolan had 11 tackles and a sack for the Blue Bears. Teammate Justin Ruffin, the former Salisbury High standout, returned three kickoffs and ran for a two-point conversion.