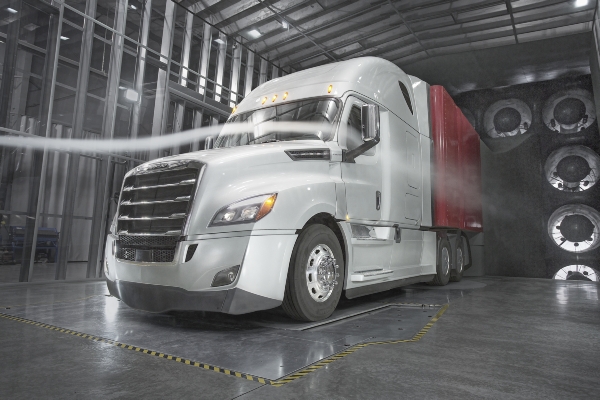 CLEVELAND — With better fuel efficiency, enhanced safety and driver comfort that would make anyone ready for a road trip, Daimler Trucks North America’s new Freightliner Cascadia truck model was created with the goal of lowering the Real Cost of Ownership.

The Real Cost of Ownership is Freightliner Trucks’ concept that includes hard costs, such as diesel expenses, and soft costs, like driver turnover rates, to calculate what it actually costs to own one of their trucks, according to a press release from last year.

To develop this year’s new Cascadia, the company used Daimler’s knowledge and tested the truck in Daimler’s wind tunnel, as well as testing on real-world highways.

Richard Howard, senior vice president of sales and marketing for Daimler, said in a press release that designers and developers used information from a variety of sources to make the Cascadia “the most advance truck Freightliner has ever designed.”

“Many of the new Cascadia enhancements are the direct result of feedback from customers, dealers, service technicians and historical data,” he said in a press release.

When the Cascadia Evolution was unveiled in 2015, it was said to have improved fuel economy over an EPA 2010-compliant Cascadia by an additional 7 percent. A press release said engineers wanted to top that with this year’s model.

On the outside, the new Cascadia has a new aerodynamic shape that includes an upper door seal, elliptical-shaped mirrors, sloped hood, integrated air deflecting bumper and integrated antennas as standard enhancements that were designed to cut down on drag.

On the inside, an integrated Detroit Powertrain brings the engine, automated manual transmission, Intelligent Powertrain Management and Detroit axles together to work as a unit.

The super-finished gears and use of low viscosity transmission oil add to the transmission’s fuel efficiency and also reduces friction. The Intelligent Powertrain Management uses a GPS-based system that can prepare for future road terrain and allow the powertrain to use its fuel in the most effective way.

“By combining advanced aerodynamics of the new Cascadia with the power of the high-performance, high-efficiency integrated Detroit Powertrain, we will help customers get the most out of every gallon,” Howard said.

The new Cascadia was designed to be ergonomically conscious with a wraparound dashboard and switches and steering wheel controls placed where the driver does not have to stretch to reach them. Drivers will enjoy a smoother ride because of the new front suspension and better roll stiffness.

In the truck’s cab, customers have options for the driver’s living space. There is a redesigned sleeper area that includes more cabinets and bigger spaces for standard appliances. One of the options includes a Driver Loft that features a dinette table that can double as a work table. There is also seating on the other side, with seat belts, that can be folded down flat to bring down a murphy-style bed.

For some entertainment during downtime, a swivel bracket can hold up to a 26-inch flat screen television.

“Professional drivers can spend more than 100 hours in the cab during an average work week, and the environment needs to be friendly and inviting both on the job and during downtime,” Howard said in the press release.

More time on the road, less time in the shop

With a full LED system incorporated in the new Cascadia’s headlights, drivers will be able to have a better field of vision in the dark and in bad weather, according to the press release.

The truck was also created with a one-piece windshield design and a one-piece door glass that gives drivers an unblocked view of the mirror and road.

For the times when the trucks need maintenance, the new splayed frame rails give technicians more room in the engine compartment. The fuse and relay box are in front of the eVault and are accessible without hand tools, and the standard two-piece front bumper can be taken off in two minutes.

The dash panel can also be easily removed and the electronic control units are safe from the elements inside the new eVault in the truck’s cab.

The Remote Updates feature will be available in the second half of next year.

Henning Bruns, general manager of the Cleveland manufacturing plant, said the plant is preparing for the equipment and training they will need to produce the new Cascadias. He said production of the new models will not begin before January 2018.

Robert Van Geons, executive director of RowanWorks, said Daimler has continually “expressed their interest in the county.” He said production of the new model “bodes well” for the company.