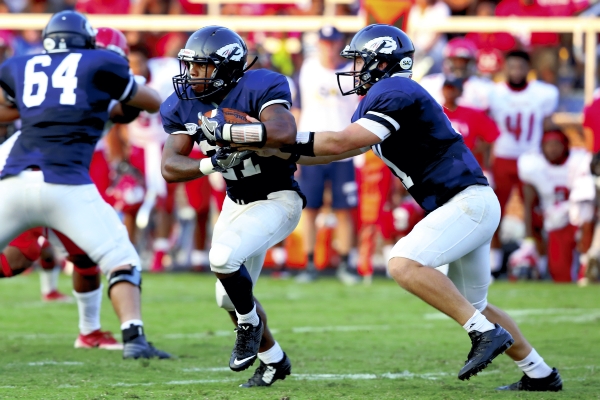 Catawba’s QB Mike Sheehan (11) hands off to Quientel Goodwin (21) for a 10-yard gain and first down. Photo by James Sipes, for the Salisbury Post.

SALISBURY — Catawba began the season as the South Atlantic Conference favorite and ranked 22nd nationally in Division II.
But things haven’t started as planned, and the Indians fell at Shuford Stadium to Winston-Salem State, 23-17, on Saturday night in front of a nearly full house of 4,186 fans.
Catawba is 0-2 for the first time since 2011 and lost to the Rams for the first time.
“Just a tough night, and we’re in a tough situation,” Catawba coach Curtis Walker said. “We did not play one of our better games since I’ve been here. We’ve just got to regroup.”
Catawba’s final play was an unfortunate spike — on fourth-and-1 at the WSSU 32, with two seconds left. That was a deflating way to end it, but it was going to take a miracle at that point for the Indians to pull it out.
“There was a lot of commotion, and I did the unthinkable,” said veteran QB Mike Sheehan of the fourth-down spike. “We’ve got to be able to line up and run some kind of play there.”
The Rams (1-1) ruled mostly by hammering away on the ground with a physical, ball-control, power running game that smashed away at Catawba’s veteran defense. The Rams ran it 43 times and were rewarded with 209 net yards.
“We started slow on offense, and then it was just hard to get the ball in the second half,” Sheehan said.
Speedster Te’Vaughn Hurse, a junior college transfer who hadn’t been cleared eligibility-wise when Winston-Salem State dropped its opener to UNC Pembroke, keyed the running game with 103 yards. He also got the TD that gave the Rams a 7-0 lead.
“They were running zone and power, basic stuff,” but we were over-pursuing a lot and not staying in our gaps,” Catawba defensive end C.J. Barksdale said. “And their backs were very good at cutting it back.”
Catawba’s first TD of the game — and the season — came late in the first quarter when Sheehan flipped a 9-yard pass to Keyon West in the left corner of the end zone for a 7-all tie. Catawba got field position for that score when Dijonne Williams got a hand on a short WSSU punt.
But the second quarter was all Rams. Will Johnson’s 37-yard field goal made it 10-7, and QB Rod Tinsley found swift receiver Canard Brown for a 49-yard scoring play. Brown made a terrific run after his catch near the right sideline, making a cutback move and then winning a footrace with Catawba’s secondary all the way across the field to the end zone.
Down 17-7 at the break and kicking off to start the second half, Catawba was in trouble, and then the Rams’ offense smashed fiercely for five minutes to start the third quarter. Catawba finally dug in and halted the Rams at the Catawba 5 (Barksdale and Trevor Bembry made the key stop), but Johnson kicked another field goal, and it was 20-7.
Sheehan’s 24-yard completion down the middle to Sam Mobley led to a 23-yard field goal by freshman Brennan Lambert, and Catawba trailed 20-10 after three quarters.
But then the Rams were on the move again — 12 plays, 67 yards — to set up Johnson’s third field goal of the night. His 34-yarder provided a 23-10 cushion.
Catawba played its best offense late, with the cold fingers of desperation closing in.
The Indians drove 76 yards to score, as the Rams grudgingly gave ground. Sheehan fought for a first down at the WSSU 4-yard line. Then he got a touchdown with 6:52 left to play, slicing around the left side. Lambert’s PAT cut Catawba’s deficit to 23-17, and there was still time to finish a comeback.
Covering the ensuing kickoff was critical for the Indians, and Lee Brackman’s boot was a strong one to the goal line. But former UNC player Reggie Wilkins made a determined return for the Rams, and when a Catawba 15-yard penalty was tacked on, the Rams were starting on their 49.
The Rams picked up two huge first downs, including a dagger when Tinsley completed a slant for 6 yards on a fourth-and-5 play.
Still, the Indians grimly held, with Barksdale making a diving tackle for a 4-yard loss to bring up fourth-and-6 at the Catawba 19.
Johnson trotted on for his fourth field goal, the clincher, but he missed it — wide right.
“We got a lot of pressure up the middle,” Barksdale said. “That affected the snap some, and then the kicker shanked it.”
That put Catawba’s offense back on the field, 80 yards from a tying touchdown, but with the clock down to 2:22 and with no timeouts left.
Sheehan hit Jourdan Osinskie, a young tight end, at the Catawba 35, but an offensive pass interference call instead shoved Catawba back to its 10-yard-line. That flag proved tough to overcome.
“Jourdan was running a post to the middle of the field, and I saw him fighting off two guys and there was no one around him when he made the catch,” Sheehan said. “That was a confusing call, but you can only deal with the things you have control over.”
Running for his life, Sheehan got off a spinning, fluttering deep ball to a wide-open Brandon Brown, but the receiver couldn’t make the grab as the crowd gasped. An opportunity was missed.
Catawba appeared to be doomed when a fourth-down pass fell incomplete, but a roughing the passer penalty provided a first down and new life.
On third-and-10 at the WSSU 41, Sheehan fired a strike to Osinskie, but the tight end was stopped just shy of the sticks, with the clock racing toward zeroes. The spike came next, and Catawba was 0-2.
“I hate the way it ended, but we just have to learn from it,” Sheehan said. “I did like the way the offense fought at the end. We came together.”
Carson-Newman is next, so it doesn’t get any easier.
“We just have to look at ourselves in the mirror this week,” Walker said. “It’s tough right now, but we’ve got to go forward.”