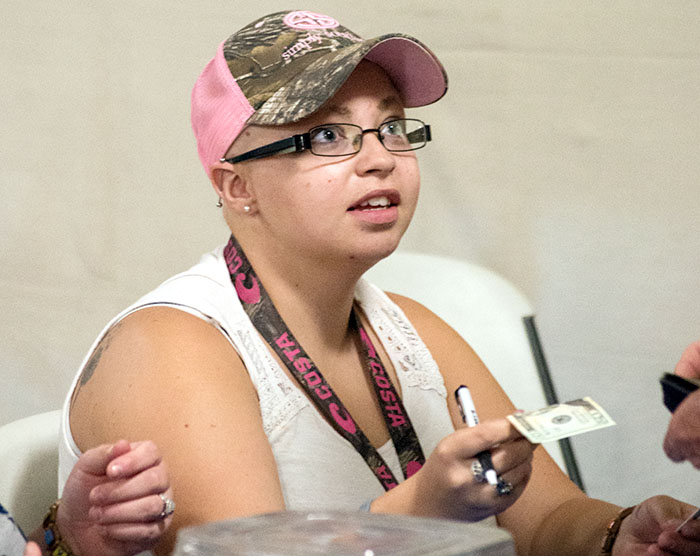 Josh Bergeron / Salisbury Post - Danielle Wilkes, who has been diagnosed with cancer, works during a fundraiser in her honor on Saturday.

SALISBURY — The Parham family was understandably excited when they received a call from Duke University doctors this week.

Doctors delivered news that the Parhams for months have hoped to hear. Duke would be able to perform the surgery that Danielle Wilkes desperately requires.

In April, doctors first told Wilkes, 19, about her cancer diagnosis. She has a mass on her right side. It’s a rare form of cancer called adrenocortical carcinoma.

Veins of the mass have also grown into an artery that’s attached to the heart — the vena cava. Without surgery, the cancer could grow into her heart. Her heart could stop as a result.

The Parhams had struggled to find a doctor who was willing perform surgery to remove the cancer. They had spoken to doctors affiliated with a number of health care systems. However, Julie Parham said she was told this week by Duke University doctors that the surgery was possible. The call came one day after an article about the Parhams was published in the Salisbury Post, she said. The family also received a call from doctors at the University of Michigan inquiring about the case.

Wilkes is a woman of few words but said she was happy to receive the news this week that a doctor was willing to conduct the surgery.

Julie Parham said she was at work when she received a call from Duke University doctors. Wilkes was at work too, which meant the news had to stay secret until Wilkes came home. The family would later have a small party with cake and ice cream to celebrate the news.

Later this month, Wilkes is set for a round of chemotherapy. In October, she is scheduled to receive surgery to remove her cancer.

However, money remains a question for the family. VFW Post 8989 and a number of American Legion Posts in Rowan County banded together on Saturday to help with any upcoming costs. The organizations raised money through a 50/50 raffle, breakfast event, a poker run and yard sale.

By 4 p.m., the raffle had raised nearly $1,700. About 50 motorcycles participated in the poker run. Jerry Bumgarner organized the yard sale and said it had raised more than $800.

Wilkes said she was pleasantly surprised by the turnout for Saturday’s fundraising events. She spent the day at the Samuel C. Hart Post 14 American Legion on South Main Street selling raffle tickets.

Other stops on the poker run included the Lucky Turn Around in China Grove, American Legion Post 106 on N.C. 801 and Rockwell AMVETS.

“We worked our butts off, but it turned out well,” said Fran Parham, Wilkes’ grandmother, about Saturday’s fundraiser.