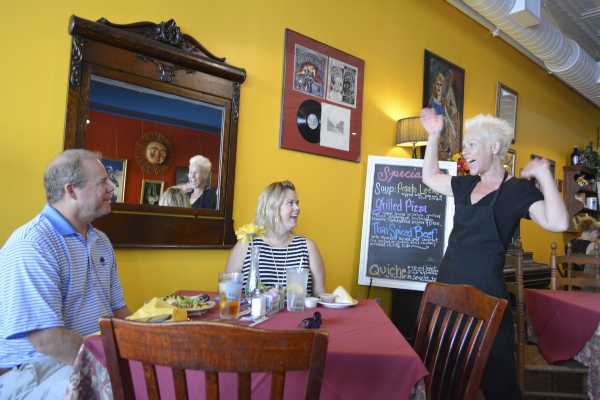 SALISBURY — When Heather and Scott Teeter discovered one of their longtime employees was facing major surgery, they thought it would be a nice idea to raffle dinner for two in the private dining room of their restaurant, Sweet Meadow Café. Word of the fundraiser soon spread among the downtown restaurants and businesses.

And yes, still dinner for two at Sweet Meadow Café.

The list continues to grow, and Heather posts updates on the restaurant’s facebook page. The donations are worth $1,800, and Heather plans to bundle gifts so that five winners will receive hundreds of dollars of prizes.

Pretty good for an investment of 20 bucks, huh?

The Teeters and their employee are completely overwhelmed by the outpouring of generosity. The employee’s surgery is covered by insurance, so the money raised — the Teeters hope to sell at least 100 tickets — will go toward recuperation time and non-medical expenses.

“Everybody has wanted to help in some way,” Heather says. “It’s just been phenomenal.”

She adds, “These people may not know this employee personally, but care enough about Downtown Salisbury to get involved. When it comes down to it, this town’s got a big heart.”

Their employee adds, “It’s overwhelming. I can’t come up with another word. There’s no other way to describe it.”

The Teeters bought Sweet Meadow Café six years ago from its original owner, and moved to their new location at 111 N. Main St. in February 2015. In that time, they’ve developed a loyal clientele.

John Ketner of Rowan Investment Co., just a few blocks away, eats lunch there most Tuesdays and Thursdays.

“When I go out to eat, I look for really good food and a comfortable atmosphere,” he says. “Heather and Scott do a great job on both of those. They always have interesting things on the specials board. I do think there’s a strong community among business owners, among retailers and restaurateurs. We all want to help each other and take care of our own.”

“Having been in Salisbury during the best and worst times of my life, this is where I want to be,” Rick says. “Salisburians have a thing for helping other Salisburians. We do take care of each other. We hope this employee knows that people do care, life is worth living, and there are people who love you — even if they don’t know you, they love you. If we all do something small, we can create something great.”

“We’re all part of downtown,” Heather says. “We’re very connected to the restaurants and the merchants. Everybody’s got their niche and everybody works together. We try to support each other.”

The independent restaurant owners, he says, often talk with one another and share information. “You hate anybody has to deal with this kind of situation, but we’re all pretty tight.”

Heather and Scott’s employee is ready to have surgery, and ready to return to Sweet Meadow Café as soon as possible afterward.

“I just want to be back to normal, and work like I used to work,” the employee says.