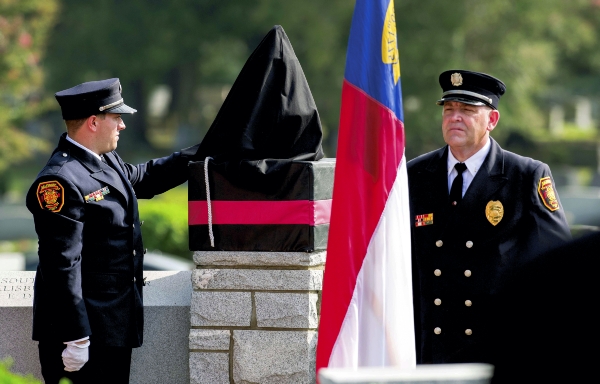 JON C. LAKEY / SALISBURY POST Salisbury Firefighter Tony Amenta rings the bell 3 sets of five rings during the service. Salisbury Fire department Lt. Ted Reaume stands by. Emergency Services from Salisbury and Rowan County gathered at the Firefighter Memorial on South Main Street in Salisbury on Friday morning September 9th to hold remembrance service of the 15th anniversary of terrorist attacks on the United States. Thousands of Americans died that day as a result of the attack, most of those included emergency personnel that responded to attacks on the World Trade Center buildings. Friday, September 9, 2016, in Salisbury, N.C.

SALISBURY — On Friday morning, first responders from across Rowan County gathered to remember a moment that no one will ever forget.

Salisbury Firefighter Kinston Nesbit, now 21, was just six. He was watching the horrific moment unfold on TV at home. Salisbury Police Chief Jerry Stokes was getting ready for work. Salisbury Fire Chief Bob Parnell was already at the station. Parnell and other firefighters would gather around TVs to watch events unfolding hundreds of miles away.

On Sept. 11, 2001, terrorists intentionally crashed two passenger airliners into the World Trade Center’s North and South towers. A third plane crashed into the Pentagon. A fourth crashed into a field in rural Pennsylvania after passengers tried to overcome the hijackers. In all, nearly 3,000 people were killed, more than 6,000 others were injured. Hundreds of first responders were killed.

“And while the rubble was still falling, true to their character, thousands upon thousands of the bravest among us instinctively rushed to action,” said Rowan County Commissioners Chairman Greg Edds during a Friday speech. “Police and fire departments all across America, each sworn to serve and protect their communities scrambled to guard their own cities and towns, large and small, uncertain if they could or might be next.”

Edds was one of a few speakers during a September 11 memorial event at Salisbury Fire Department Station 5 on South Main Street. The ceremony involved a placement of a wreath, taps and prayers. The ceremony also involved a bell run in a simple, 5-5-5 pattern to honor fallen firefighters.

“As we gather here today, in a feeble attempt to speak on behalf of the grateful people of Rowan County, I confess that there are no adequate words to express our appreciation to you, our local heroes,” Edds said. “You have our sincerest thanks, our highest admiration and the promise of our collective daily prayers that God will protect you as you selflessly protect us.”

Stokes, who spoke during Friday’s ceremony, quoted former President George W. Bush when he said the terrorist attacks on Sept. 11 shattered steel but could not dent the steel of American resolve.

“Today, we remember these events and the sacrifices,” Stokes said. “They shook us, but they did not shake our faith in hope. We might be challenged today too by crime, by violence, unrest and frustration but remember we are a nation of faith and hope and that gives us the courage to bring us through anything.”

More than once during Friday’s event, speakers praised the bravery of first responders during the September 11 terrorist attacks during Friday’s event and in daily work. For Nesbit, being a firefighter is something he says he enjoys. It “gets the adrenaline pumping,” he said after the event ended. Parnell said first responders see their job as a calling and a passion to help people in a time of need.