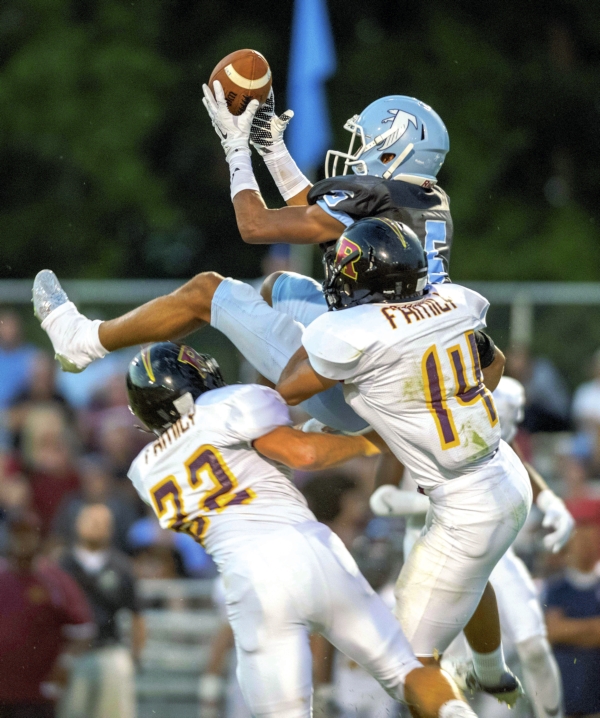 MOUNT ULLA — West Rowan bore little resemblance to the football team that was battered by 41 points two weeks ago by Davie County and beat highly regarded Robinson, 21-19, on Friday.
Deyquan Byrd’s diving interception ended a roller-coaster ride in Mount Ulla. It was like old times for West’s fan base. Folks were practically dancing in the aisles at the end.
“I don’t know that many people gave us a chance against a team that people had in the top 10 in the state,” emotional West coach Joe Nixon said. “I couldn’t be prouder of the work the kids put in and the staff put in to get better as a football team.”
Nixon downplayed the “something to prove” aspect of things, but his players clearly played this one with XXL chips on their shoulders.
West had its off week following the 41-0 debacle — the program’s first shutout loss in 14 years — and players were more than ready to put Davie in the rearview mirror.
“We were so anxious to get back out there,” said linebacker L.J. Robinson, who produced a game-changing interception return for a touchdown. “Look, we played a bad game against Davie, but now that game is behind us and that game wasn’t us. I think we proved tonight that we’re a good team.”
Robinson isn’t disputing that.
West’s defense was nothing short of magnificent. Robinson (3-1, 3-1 SPC) has a high-powered passing game with a fine veteran quarterback in Josh Dale, but the Falcons (2-1, 1-0) were a stone wall in their South Piedmont Conference opener.
West allowed seven first downs and 44 passing yards for the game and picked off three passes.
Meanwhile, West controlled the ball on offense, dominating time of possession. Jovon Quarles netted 107 ferocious yards, even though husky Robinson tacklers stuck him for losses nine times.
West also found a passing combination. After two games at quarterback, Kortez Weeks played mostly at wideout and was fabulous, with 10 catches for 141 yards. He made leaping catches, he made double-teamed catches, and he made serious yards after he caught the football.
If Weeks is going to catch passes, someone has to throw them, and the Falcons may have found the thrower in sophomore Payne Stolsworth.
Behind solid protection, Stolsworth threw two TD passes to Weeks and accounted for 196 yards through the air. He was calm. He was accurate. He didn’t play like a rookie.
“That’s how we’ve been practicing, with Payne at quarterback and me at receiver, and I was proud of the focus Payne showed tonight,” Weeks said. “We executed our offense.”
Robinson hit a dynamic pass play early — Dale to Javonte Misenheimer for 39 yards to set up first-and-goal at the 8. But the Falcons wouldn’t take another step back. Daniel Rivera’s field goal put the Bulldogs ahead, 3-0.
L.J. Robinson’s pick-six of Dale in the final seconds of the fourth quarter, on a first-and-10 play from the Robinson 25, turned the game.
“I saw the quarterback looking at me, reading me, and I knew that pass was coming my way,” Robinson said. “I was able to make a great break on the ball.”
Stolsworth found Weeks for an 11-yard TD with the Falcons facing third-and-10 midway through the second quarter for a 14-3 lead.
West’s defense held after a potential disaster on a bad snap over Stolsworth’s head gave Robinson the ball at the West 13, and the Falcons took that 14-3 lead to the break.
Robinson cut its deficit to 14-5 early in the second half on a snap issue on a West punting attempt by Federico Cruz. With the ball bouncing crazily in the West end zone, Cruz wisely kicked the ball through the end zone to give Robinson a safety, instead of a touchdown.
Robinson then made its only real push of the night, taking advantage of a short field after West’s free kick and steamrolling 44 yards for the touchdown that made it a 14-12 game with 8:17 left in the third quarter.
Momentum had swung.
“We kind of looked adversity in the eye right there and just kept playing football,” Nixon said. “We made a lot of mistakes, but we fought through them.”
Early in the fourth quarter, Stolsworth and Weeks shifted momentum back to the Falcons. Weeks won a battle with two defenders to snare a fourth-and-5 pass for a 20-yard touchdown.
“I had to out-muscle them for that one,” Weeks said. “I was double-teamed in the second half, but I was still able to make some plays.”
That put West ahead, 21-12, with 11:14 left. It should have been routine from there, but when Robinson scored on a bizarre fumble return with 4:14 left, it led to a frantic finish.
West was able to chew clock with runs by Quarles, and a Stolsworth-to-Weeks completion over the middle with 1:44 left allowed the Falcons to keep the ball until there were only 20 seconds left to play.
Robinson had time for three desperate pass plays. After an incompletion, Devin Turner got a sack but was called for a face mask penalty. Byrd’s clinching interception came on the final snap, a heave from the Robinson 48.
•••
NOTES: Paris Hillie also had an interception for West. … While Weeks had an amazing night, he had two terrific plays that were called back by flags — a 98-yard kickoff return and a 47-yard touchdown run. … Tight end Avery Allen moved to tackle and his blocking was a reason West had some success on offense. … Robinson was playing just four days after beating Hickory Ridge.