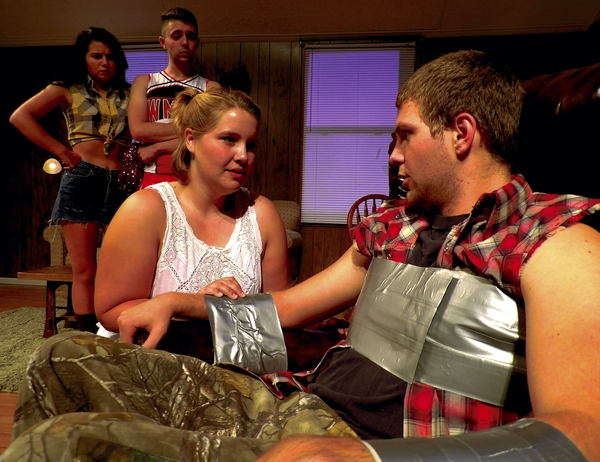 If you’re confused by the title, “Exit Pursued by a Bear,” don’t let that stop you from seeing the play by Lauren Gunderson at Lee Street theatre.

Directed by Craig Kolkebeck, the four cast members use humor to deal with a serious issue — domestic violence.

It’s two hours of poignant scenes, over-the-top funny scenes and an important message. On a screen that serves as the kitchen window of the set, statistics are displayed about victims of domestic violence, along with signs of an abuser — sweet one minute, cruel the next, promises, pleading, short tempers, a history of abuse in the household.

Be sure to pay attention to that part of the play.

It’s sort of a play-within-a-play, as victim Nan Carter enlists her two friends to show her husband why she’s leaving, and why he’s duct-taped to a chair and surrounded by deer meat and honey.

Sarah Rae Dover plays Sweetheart, who is also the stripper Peaches, and who plays Super Kyle in scenes about his behavior.

Kyle, who spends a lot of his time in that chair, is played with a drawl and a level of ignorance by Brennan Chisum. Either he or Kolkebeck developed his slouching walk and slow, labored speech.

Simon, Nan’s best friend, is played by Caleb Garner, who relishes his role as a gay man who truly loves Nan and wants her to get the heck out.

Summers’ Nan spouts quotes from her hero, Jimmy Carter, and makes herself completely sympathetic. Nan is a smart, but lost young woman who said yes to the first man who asked her to marry him. She has regretted it ever since, with his name calling, slapping, pushing and insults.

Kyle is sweet, almost childlike with her at first, until he gets drunk and she doesn’t do what he wants when he wants it. They really have nothing in common. She loves animals, he hunts deer illegally. He doesn’t have a decent job, berates her for wanting to read a book and accuses her of being unfaithful.

Dover is very attractive and plays Sweetheart’s enthusiasm for becoming an actress to a T. She passionately delivers impassioned speeches, She emotes all over the place, and she has a big reveal that turns the tide when Nan starts having doubts.

Garner is having a blast as the friendly queen. He’s dressed as a cheerleader, which brought laughs, and he mugs to fit the scene being played. He’s also angry at dumb, abusive Kyle, and he’s ready to step in at Nan’s hour of need.

The very idea that Nan is going to take care of Kyle by making him bear bait is pretty funny. His duct-taped position in the recliner is funny. Sweetheart’s overacting is funny. Nan’s enthusiasm is funny. But this is a serious subject. After laughing at their antics, the audience got very quiet as Nan considered letting Kyle go and staying with him. His manipulation of her is a classic sign of abuse. He makes her feel so bad about herself that she can’t imagine leaving and surviving.

But this Nan has two good friends who remind her of what happened, and Nan goes back to her plan to get out, write a book about it all and appear on television.

The set and lighting design by Chris S. Speer serves the play well. Don’t be surprised if you see him in the lobby asking to take your picture for the opening of the show.

Kolkebeck had a fine line to walk — playing up the comedy or playing up the tragedy of abuse. Humor often masks pain, and he makes that work here. Summers’ Nan is lovable, and her quirky friends are, too. Their triumphant final scene is both hilarious and empowering.

The play runs two hours with a 15-minute intermission. It is not for children, with plenty of bad language and adult themes, but it is for folks who want to laugh and learn.