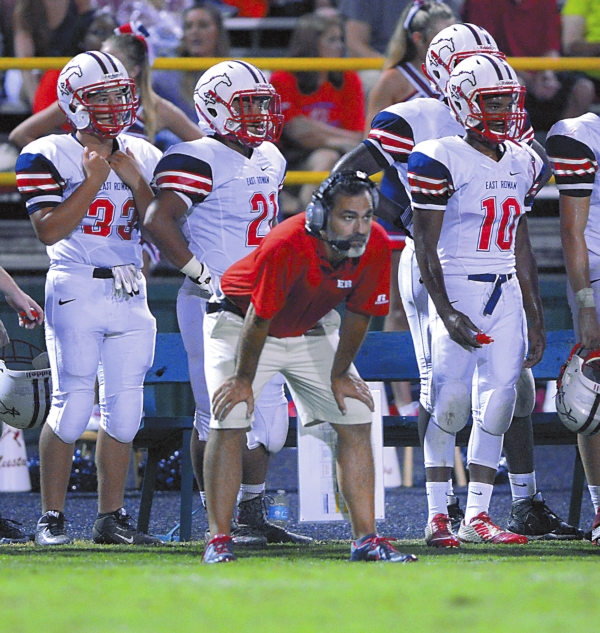 GRANITE QUARRY — Senior running back Max Wall dazzled Cox Mill with some long touchdown runs but it was the East Rowan defense that stole the show in Friday’s home opening South Piedmont Conference win over the Chargers, 25-7. Wall rumbled for 279 yards and three long TD runs but even he agreed the East defense was critical for the win.

The Mustang defense and special teams came through with two fumble recoveries, an interception, a blocked field goal, three sacks, seven tackles for loss and sent a considerable amount of time in the Cox Mill backfield all night.

But no play was more critical for East (2-2, 1-1 SPC) than the clutch game saving stop registered by senior defensive back Wesley Porter midway in the third quarter. The Mustangs had just taken a 13-7 lead in the game when Cox Mill sophomore quarterback Eric Bone broke right up the middle on a keeper and appeared headed for a sure 56-yard touchdown. But the fleet-footed Porter darted in from the right side, caught Bone at the 10 and snatched the ball right our of his grasp.

Instead of a potential 14-13 deficit, East and Porter had reclaimed all of the momentum. Two plays later, the wild sequence was complete when Wall broke off right tackle and raced 88 yards untouched for a 19-7 lead with 9:30 left in the third quarter.

“I was watching him (Bone) run and saw he was carrying the ball kind of loose,” said Wall of his big takeaway. “So I just ripped it out and it landed right in my stomach. But I was definitely going for the ball there. That was my intention the whole time.”

The strange turn of events seemed to take all of the steam out of the Chargers (0-3, 0-1 SPC) especially when defensive tackle Zack Simpson intercepted Bone’s pass on the next sequence, followed by a blocked field goal by Mustang K.P. Patterson on the subsequent possession. East sealed the deal on the second play of the final quarter when David Broaddus capped a 75-yard drive with a 22-yard run up the gut for a 25-7 lead.

The Mustang defense had one more statement to make late in the game when Cox Mill embarked on a time consuming 78-yard drive that gave them first and goal at the East 4-yard line. But a first-down run was stuffed by defensive back Deiontae Gallmon at the three. Then after an incomplete pass, defenders TJ Drew and Devon Jerry nailed Charger runner Malachi Wheeler at the 4. The goal line stand was complete when Bone overthrew his receiver in the end zone.

“Our defense was just outstanding tonight,” East head coach Kenneth McClamrock stated. “I thought we did a nice job of controlling what their offense was able to do. Our defensive front put a lot of pressure on them and was getting into the backfield all night.”

As for Max Wall, he enjoyed a record setting night with TD runs of 89, 73 and 88 yards leading to his 279 yards on just 15 carries (a remarkable 18.6 yards per carry). Last game, Wall became the all-time career rusher in East Rowan history and last night he became the first runner to go over 3,000 yards for the Mustangs. He now has 3,212 career yards, good for 12th place all time in the county.

But typically, Wall wanted nothing to do with the records or even his own stellar night of long TD runs. “Once again, I just did my job but I give all the credit to my offensive line” he said. “I would not be able to do any of it without them.”

His coach McClamrock was a little more complimentary of his speedy senior. “I thought that tonight Max ran the way I have been waiting for him to run he ball.” he said. “He really ran with purpose tonight and he ran as well as I have seen him in three years.”

The game was close through most of the first half as the teams traded a total of 11 punts (17 for the game). Wall broke the deadlock with his 89-yard burst late in the first period. The Chargers were able to tie it with 6:08 left in the 2Q after a short punt, a screen pass an a late hit on the Mustangs. Cox Mill tied it on an end around reverse by receiver Michael Lewis from 21 yards. It stayed that way until early in the third period when Wall broke his 73-yard scoring run. The defense took care of the rest from there.