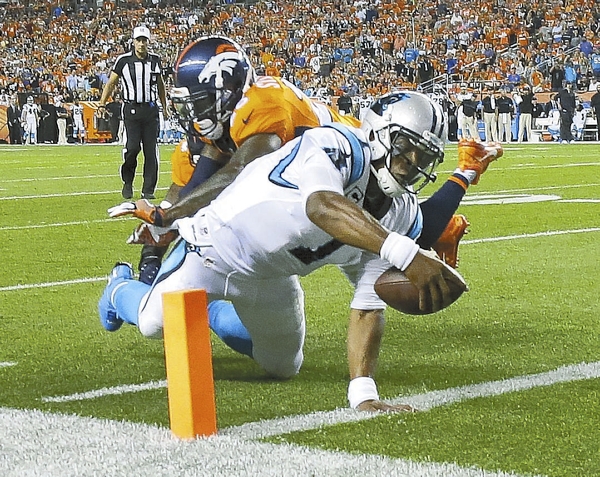 DENVER (TNS) — In a Thursday night season opener that had the intensity and physicality of a postseason game, the Panthers and Broncos met the same fate as last February.

Graham Gano’s 50-yard field-goal attempt with 9 seconds left faded wide left, and the Panthers’ hopes of a strong start to the season were dashed.

Denver topped Carolina, 21-20, on the night when the Broncos unveiled their Super Bowl 50 banner in the same end zone where Gano’s boot waned left.

Carolina enjoyed a great first half that seemed to leave all the Super Bowl 50 ghosts in the past. After a Super Bowl where the Panthers were 3-for-15 on third downs, they were 6-of-7 in the first half on the crucial down.

Cam Newton beat two Broncos around the edge for a 2-yard score in the second quarter and he returned to his dancing ways, though the dab remained buried as promised.

Meanwhile, Carolina turned the Broncos over three times at or inside the Carolina 30 through the first 35 minutes of the game.

Coming off a Denver touchdown to tighten the game to a 3-point margin, the Panthers only had two plays before giving the ball back to the home team. Newton threw a pass to Kelvin Benjamin, who ran a somewhat lazy slant route, and it was tipped and intercepted by Chris Harris Jr.

Denver coach Gary Kubiak made a gutsy call on that drive when he decided to go for it on fourth down at the 1 1/2 rather than kick a field goal and tie the game. The move paid off. The Broncos got the first down, and three plays later they were in the end zone with their first lead of the game.

Trevor Siemian: For someone who had never thrown a pass in an NFL regular-season game, Siemian played it cool throughout the game despite mistakes.

Von Miller: The Super Bowl 50 MVP got a key third-down sack late that put Carolina in big trouble with the game on the line.

—Newton was seen by NBC cameras flossing his teeth on the sideline late in the third quarter. That’s highly unusual.

—The Broncos defense was in disarray for most of the first half. Along with giving up 17 first-half points, it had 12 men on the field three times. Once Denver took a timeout, and the other two times the defense was flagged for it.

—The Panthers rolled into the game with three safeties and three tailbacks. Backup safety Dean Marlowe, who was doubtful entering the game, was inactive along with running back Cameron Artis-Payne, who appeared to show he was capable of being Jonathan Stewart’s backup during the preseason. The other inactive players were WR Brenton Bersin, WR Damiere Byrd, LB Jared Norris, OL Tyler Larsen and DE LaVar Edwards.

—New Panthers punter Andy Lee took just one game to set a new team record in punting. His 76-yarder in the third quarter was the longest in team history, but not a career long. Lee knocked an 82-yarder in 2008 with the 49ers.

—Carolina was able to kick a field goal to end the half after putting together a strong final series. But Denver threw the ball coming out of the 2-minute warning on third down, and the incompletion stopped the clock at 1:55. A run would have let the clock tick down to about 90 seconds, and the Panthers had no timeouts to stop it.

—Denver rookie running back Devontae Booker fumbled his first NFL regular-season carry. Booker put the ball on the deck early in the first quarter, a fumble caused by Charles Johnson, as the Broncos drove downfield on the opening series. Later, fullback Andy Janovich took his first career carry for a 28-yard touchdown.

—First-round pick Vernon Butler got the first sack of his career when he took down Siemian for a 9-yard loss. Butler had trouble finishing sacks in college, getting only five in his career at Louisiana Tech. He owned the left guard and then made a bee line for the quarterback, who crumpled as Butler got there.