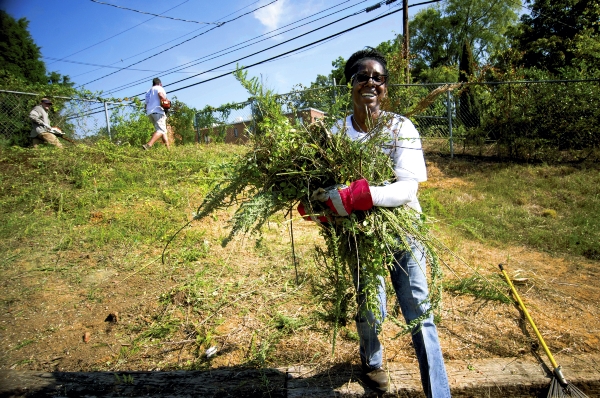 JON C. LAKEY / SALISBURY POST Tammie Worth-Tabor, a cab line supervisor at the Cleveland Truck plant for Daimler Trucks North America, carries an armful of debris that was cut from the overgrown underbrush around the Salisbury High School track and practice fields. Volunteer crews dispersed through out Rowan County on Thursday to give back to the community through the United Way's Day of Caring. Thursday, September 8, 2016, in Salisbury, N.C.

Henning Bruns, general manager of the plant, said there was landscaping done to beautify the area, but it has been difficult for the school to maintain.

The Rowan County United Way Day of Caring was the perfect opportunity for volunteers to go out and help the school.

“We feel that it is our responsibility to give back to the community,” Bruns said.

The United Way hosted its Day of Caring on Thursday with volunteers working on various community service projects around the county.

Schools and non-profit organizations submit applications for projects that would benefit their areas.

For Salisbury High School, that project was cutting down extra trees and clearing out brush, including trees that were burned in the fire that occurred in the area last month.

“We give more so that organizations that are lacking the money can do something,” Bruns said.

Bruns said the day was also a chance to make a good impression of the company on the students.

Corey Hill, president of United Auto Workers, said some of those students may be future employees, and they want to set a good example.

“That’s the impact we want to make,” he said.

Hill said he sees the event as helping his employees, their families and their children.

Bruns said that the event was a way for employees who work in different departments to interact and share ideas while away from their normal duties.

Although the volunteers were working in the hot mid-day sun, Tammie Worth-Tabor, supervisor on the cab line at the plant, said the heat did not bother her too much.

She said she loves the United Way because they actually stay true to their mission of helping the community.

“They have no limit to how far they will go to help people,” she said.

Gary Yelton, executive director, said every spring the consumers at the facility plant a garden with flowers and vegetables like tomatoes, squash and peppers. Though they wanted to, consumers in wheelchairs and walkers could not help because of the uneven grass. Now with the walkway and raised garden, anyone can participate.

“Everybody can participate, not matter what physical limitation,” Yelton said.

Wilson Cherry, director of community affairs, said the funding they receive from the United Way helps support seven unsponsored consumers so they are able to work at the facility.

Craig Powers, Street Division manager, said the walkway and raised garden was actually a three-day project. The volunteers prepared the area on Wednesday, laid the concrete and built the garden beds on Thursday and will return on Friday to pull out the frames around the walkway and fill in the surrounding area with dirt.

Powers said on top of doing something good for the community, different employees get to break away from their normal schedules and interact with each other and the nonprofits.

“It helps builds teamwork,” he said.

Rickey Walls, a city employee volunteering at Rowan Vocational Opportunities, said he volunteered because he would hope others would do the same for him.

“If I ever needed help, I would hope people would help me,” he said.

Mark Pullium, another city employee, said it also felt good to do a job and see the finished product.

City employees were involved in a total of seven sites.

Powers said it was great giving back to nonprofits that then go out and help the community.

“All of the United Way agencies and schools make our community better,” he said.

Unemployment rates drop slightly in Rowan, across the state