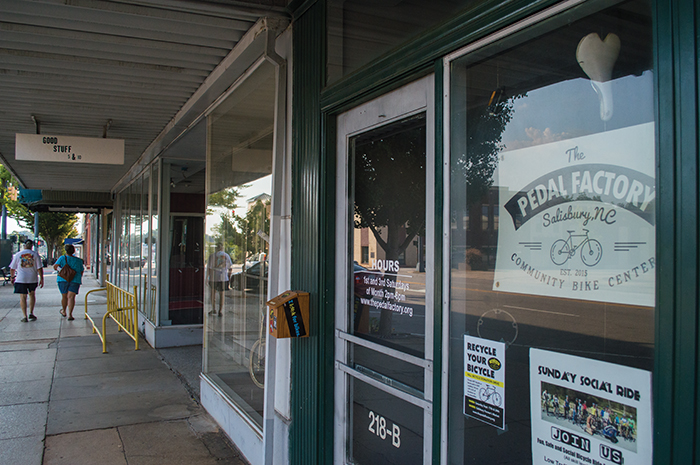 Josh Bergeron / Salisbury Post - After seeing success with its earn a bike program, the Pedal Factory, located at 218-B South Main Street, is looking for more bikes. It will set up at the Salisbury Farmers Market on Sept. 17 and 24 to collect donations.

As part of its goal to collect more bikes and parts, The Pedal Factory will set up at the Salisbury-Rowan Farmers’ Market on Sept. 17 and 24. From about 8 a.m. to noon on the 17th and 24th, the nonprofit will accept donations. The Farmers’ Market is located at the corner of Fisher and Jackson streets.

“Since we’ve started, we’ve gone through a lot of what we initially had from individuals, the police department and other places,” said Pedal Factory Board member Mary Rosser. “We’re kind of running low.”

Since it first opened in February, the nonprofit has helped 25 people earn a bike. The nonprofit’s earn-a-bike program requires people to work six to eight hours — roughly two shifts — on their own bike or helping others. There’s no specific requirements before people are allowed to start earning a bike.

Some of the 25 people who have earned a bike do it for transportation and others use their earned bike for recreational purposes, Harrison said.

“We’ve definitely exceeded our expectations of what we thought we were going to do a little bit,” she said.

Those unable to make it to the Pedal Factory’s time at the Farmers’ Market can also drop off bikes or parts during the nonprofit’s operating hours at its 218-B South Main St. location in Salisbury. The Pedal Factory is regularly open on the first and third Saturday of each month.