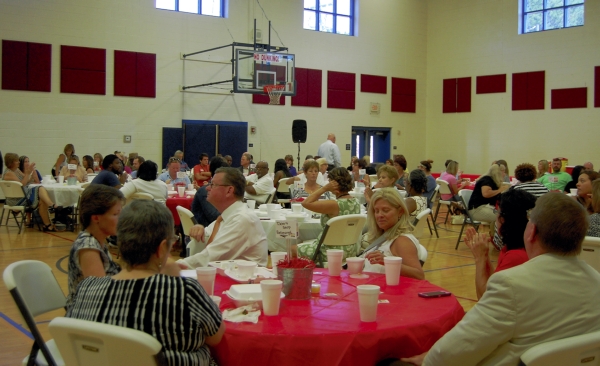 SALISBURY — The Rowan County United Way kicked off its annual campaign at the J.F. Hurley YMCA on Wednesday with a video to portray this year’s theme, “It’s the Right Thing.”

Penny Greer-Link is the campaign chair for the second year. She said she decided to chair again “after much consideration and prayer” because she believes in the United Way’s mission to help the community.

During the kickoff for the effort to raise just over $1.5 million, Greer-Link showed a video produced by Miller Davis Studios. The video, now on the United Way’s Facebook page, featured notable community members in a lip dub music video set to “Do Something’ by Matthew West and “Don’t Stop Believin’” by Journey.

Mollie Ruf was the creative director and Brad Foster filmed and edited the video.

According to the United Way’s Facebook page, more than 100 local extras participated in the video to support the organization.

Different speakers encouraged the crowd to give as much as they could to the campaign.

Greer-Link said the goal is lower than last year’s goal of $2 million because of the job losses and other issues in the community.

“Our agencies do depend on this funding and it may cause some of the programs to cease to exist,” she said. “We will have to exceed this goal in order to keep that from happening.”

Salisbury High School Assistant Principal David Scarvey was the special speaker for the event. He talked about how important the services the United Way agencies provide are for the community.

He told the story of a child he saw at the Y who told him that he and his mother thought the Y was the safest place for him to be.

“… First and foremost, he was going to be somewhere safe until his family got home from work,” he said.

Scarvey said the United Way is able to provide resources to the people in the community who need it, from the youth to the elderly.

City and county officials also spoke during the event.

“I would encourage you to go out the next couple of weeks for your campaign in your organization and encourage folks to give and to give until it hurts,” he said.

City Manager Lane Bailey said he was reminded during last year’s campaign that anyone can find themselves in need of one of the agency’s services after a tragedy strikes.

“We’re one or two life events from being in a much different situation than we are today,” he said, “and the United Way is there to help those people.”

Edds, the county commissioners chairman, said the United Way was able to put together job fairs and provide counseling and financial help to those affected by layoffs.

“Our United Way became real to thousands of people who found themselves on the struggling end of a globally competitive economy,” he said.

Alexander, Salisbury’s mayor, said she has been involved with the United Way almost since she moved to the area. She said the agencies do all of the groundwork and all they have to do is provide support.

“The least that all of us in this room can do is to go out and work very hard for all of these agencies so they can continue every day to do the right thing,” she said.

Greer-Link said it was “the right thing to do” to help the agencies support those in need in the community.

“It’s up to us to leave here today, lead the way, show our community that we know what the right thing to do is. Our United Way agencies are counting on us,” she said.

View the campaign video at facebook.com/rcunitedway or on Youtube at https://www.youtube.com/watch?v=aDlS71CjdVo.