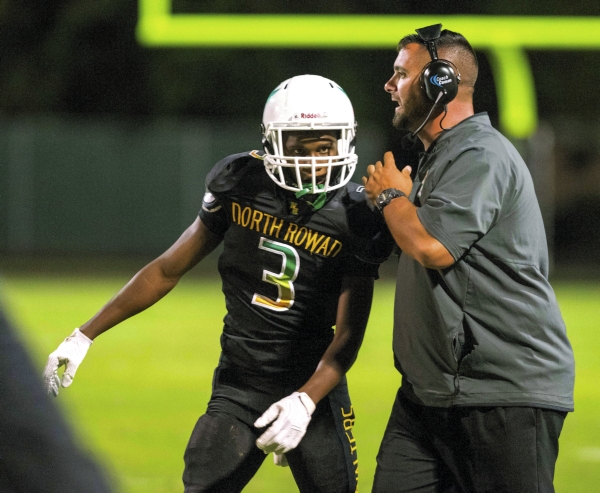 People ask me if there are any good teams in Rowan County, and my standard response is, “Yes, Carson volleyball.”
But 90 percent of the world is talking football at this time of year, and I understand that. As far as good football teams in Rowan County, well, we’ll learn some things tonight.
Most people are convinced the county is either down, way down or way, way down. Take your pick. But it’s too early to give up on the season.
I’ve seen North twice and North looks good for a 2A team and might even be 2A top-10 material. There’s a lot of speed and a lot of defense in Spencer, and North has to be the favorite in the CCC right now.
As far as the rest of the county, I believe it’s a mistake to give up on West Rowan because of one lousy game against a good team. West was touted as the county’s best when this season started and the Falcons might still live up to that before all is said and done.
I believe East and Carson can finish somewhere in the middle of the SPC pack. I believe Salisbury will win four or five. I’d like to believe South Rowan will win a game or two in the SPC.
MaxPreps ranks all the teams in the state, based on their records, scores, strength of schedule and recent history, and Rowan is not highly regarded after three weeks.
Only North (ranked 57th) and West (85th) are considered to be among the state’s top 100 teams. East (No. 141), Carson (No. 163), Salisbury (No. 270) and South (No. 331) have their doubters.
A.L. Brown is ranked No. 21 by MaxPreps, and that’s probably low. The Wonders’ opponent tonight, Mooresville, is No. 126.
This is the first Friday in which there are no “county games,” with all six county teams tackling outside opponents. It’s a Friday that could rejuvenate seasons, but it’s also a Friday that could shove teams into a downward spiral.
I’d like to be positive about Salisbury’s game at 4A Lake Norman (No. 32), but that one isn’t winnable. Not unless there’s a flu epidemic at the lake.
But everyone else in the county has a fighting chance. That’s what makes this a huge, huge, huge night. That’s three huges — not to be confused with the Three Stooges.
If West is going to challenge for the SPC championship, it has to beat Robinson (No. 98, and yes, that’s too low a ranking for the rugged Bulldogs) at home.
If Carson is going to be a factor in the SPC, it has to beat Central Cabarrus (No. 170) at home.
If East hopes to elevate above the bottom tier of the SPC, it has to whip Cox Mill (No. 311), a team that’s struggled mightily so far.
South Rowan travels to Northwest Cabarrus (No. 265), and this is one of the handful of games in which the Raiders have a reasonable shot at success.
As far as North, the Cavaliers’ game at Davie — and that’s a wounded Davie — is an opportunity. MaxPreps has Davie at No. 10 in the state and a road victory would put North back on the map statewide. If you’re a football fan with no school allegiance, Mocksville probably is the place to go tonight.
The picks were 4-0 last week and are 8-4 for the season.
While I’m only picking one Rowan team to win, I will be pleased if others prove me wrong.

Salisbury (1-2) at Lake Norman (3-0)
What happened last year: Salisbury managed 4 rushing yards. The Wildcats romped 55-8. It was 48-0 when the Hornets got on the scoreboard in the fourth quarter.
The series: Lake Norman leads 3-0.
History: Lake Norman has scored 145 points against Salisbury in the last three seasons.
What to look for: Lake Norman has logged its three victories against MECKA opponents, including a victory over a very good Hough team.
For Salisbury, there’s nothing to lose. It’s a chance to iron out some of those offensive miscues and get better.
The pick: Lake Norman 42, Salisbury 14

Robinson (3-0, 3-0 SPC) at West Rowan (1-1, 0-0 SPC)
What happened last year: West got defensive touchdowns from Theo Fisher and Malcolm Ingram and pulled out a 28-21 decision. West trailed three different times but kept coming back.
The series: West leads 1-0
History: Last year’s exciting game was the first meeting. Robinson opened in 2001 but had never taken on the Falcons.
What to look for: West has a huge preparation time advantage. Because of a weather postponement, Robinson played a tough game on Monday. West hasn’t played since it was roughed up by Davie two weeks ago.
Both are expected to be among the SPC’s top four teams, so this qualiifes as a very large early-season game.
While it’s the SPC opener for West, Robinson plays an odd schedule after coming down from the 4A ranks in 2015 and already has racked up league wins against Northwest Cabarrus, Central Cabarrus and Hickory Ridge.
While West has to figure out what to do on offense and how best to use Kortez Weeks, Robinson is going to throw it around with experienced QB Josh Dale.
The pick: Robinson 21, West 14

North Rowan (3-0) at Davie (2-1)
What happened last year: Davie won, 21-6, in a bruiser. North led 6-0, but then Davie shut out the Cavaliers the final 41 minutes. North was held to 13 rushing yards.
The series: North leads 16-13-1. North’s most recent win was in 2013.
History: Fifty years ago, the North-Davie series produced one of the more unusual games in county history with North’s Ken Beck making 19 catches in a loss. That’s still the county record.
What to look for: Davie’s passing game is iffy due to injuries, but the War Eagles are still good everywhere else, and it’s still a good 4A against a good 2A. Davie owns a win against Page, one of the state’s top teams.
It shapes up as another defensive struggle. If North can run the ball some, it could win, but Davie will get a big boost from a vocal home crowd.
The pick: Davie 13, North 7

Cox Mill (0-2, 0-0 SPC) at East Rowan (1-2, 0-1 SPC)
What happened last year: Cox Mill scored 31 unanswered points after East led early and grabbed a 34-21 victory.
The series: East holds a 3-2 lead.
History: East’s 46-43 win against the Chargers in 2014 included a county-record tying five touchdown passes by Samuel Wyrick.
What to look for: East last played on Thursday of last week, while Cox Mill played on Monday of this week. That’s an advantage for East.
Cox Mill has been outscored 75-14 in its first two outings, so East’s Max Wall, who is on the verge of 3,000 rushing yards for his career, could have a monster outing. Wall had receiving and rushing TDs against Cox Mill last season.
The pick: East Rowan 28, Cox Mill 14

South Rowan (0-2) at NW Cabarrus (0-2)
What happened last year: Well, it was wild. South led 10-0, trailed 28-10, and led 34-28, before finally losing, 35-34.
The series: South leads 20-12.
History: South won a defensive battle on its last trip to NWC in 2014 for its first road victory in the series since 1996.
What to look for: Both teams have been battered by A.L. Brown, and Northwest’s beating against the Wonders came on Monday of this week. South was off last week, so it has a big edge in preparation time.
Northwest hasn’t scored yet for new coach Brandon Gentry, although both teams the Trojans played are a lot stronger than South.
Former Catawba standout and West Rowan and North Rowan assistant Steve Williams is Northwest’s defensive coordinator.
The pick: NW Cabarrus 14, South Rowan 10

Central Cabarrus (1-2, 0-1 SPC) at Carson (1-1, 0-0 SPC)
What happened last year: Owen White threw for 145 yards for the Cougars, but Central won, 27-20, by rushing for 361 yards.
The series: Central leads 3-0.
History: In the first meeting of the schools in 2013, Carson’s Brandon Sloop rushed for 161 yards, but the Vikings rallied from an early deficit and won, 45-24.
What to look for: It’s an important league opener for Carson and coach Joe Pinyan, who has yet to find a way to beat Central.
Former South Rowan standout Daniel Crosby is the defensive coordinator for Central. Central is 0-1 in the league, losing, 34-14, to Robinson.
The pick: Central 24, Carson 21

A.L. Brown (3-0) at Mooresville (1-2)
What happened last year: The Wonders’ defense tossed a shutout in the second half for a 23-9 victory. Jayln Cagle’s 98-yard kickoff return was a game-turning play.
The series: The Wonders lead 25-12 if you want to go all the way back to 1932 when it was J.W Cannon High against Mooresville.
History: The schools resumed the series in 2015 after not meeting since 2008. Defenses have ruled the more recent games.
What to look for: A.L. Brown’s defense is special, and it’s hard to see Mooresville scoring more than 10 in this Military Appreciation Game.
Both teams played Monday and both won easily. Preparation time is even. Mooresville has lost to West Rowan and Hough.
The pick: A.L. Brown 21, Mooresville 7