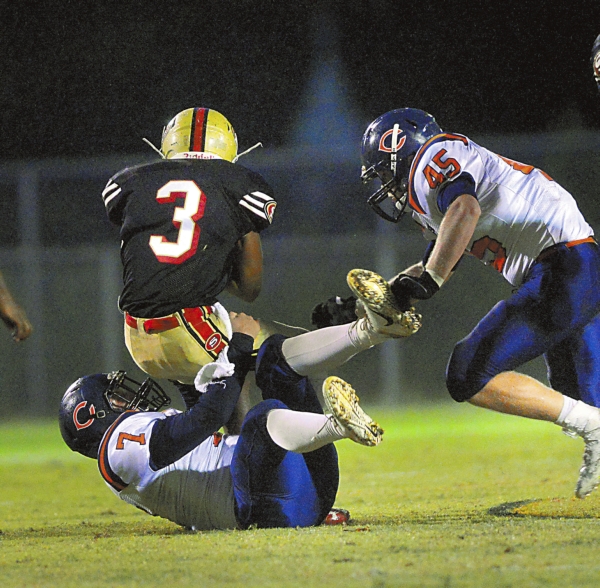 Cornerback Brenden Westbrook stuck in the dagger for Carson against Salisbury for the second straight season with a long pick-six.

Westbrook, who had two interceptions, turned in a terrific game, breaking up passes, covering punts and pancaking Hornets trying to cover punts.
Westbrook will be in the mix for county athlete of the year.
The 6-foot-3, 165-pounder has scored 423 points for Carson’s basketball team in two varsity seasons, and he’s the reigning county and South Piedmont Conference champ in the long jump.
•••
Besides Westbrook’s interceptions, Carson got a pick from Austin Cain and a fumble recovery by Cameron Rayfield.

•••
Linebacker/long snapper Isaac Bell had as good a game as you can have on defense and special teams against Salisbury. Bell accounted for a pair of deuces for Carson on the scoreboard. He was credited with a safety and he also caught a conversion pass.
Bell, who also found time to force a fumble, is the brother of Wingate long snapper T.J. Bell.
•••
Helping make Bell’s big game possible were tackles Matt Beaver and Blake Daniels, who shared a sack, and nose tackle Josh Malloy.

•••
Junior Cole Sifford played some halfback as well as fullback in Friday’s 31-7 win against Salisbury and turned in a career night with 90 rushing yards on 16 carries.
He was the offensive standout for Carson (1-1), which got some hard work from a committee of backs that included Bailey Rayfield and James Kotcamp. Sifford, Rayfield and Kotcamp scored a touchdown apiece.

•••
It appears Owen White will quarterback the Cougars again this season. While White didn’t have a big game stat-wise against Salisbury, coach Joe Pinyan was pleased with his decision-making and game management.
There was much preseason speculation that the junior wouldn’t play football or least wouldn’t play quarterback because he’s such a major baseball prospect. White has many Division I college offers already and he’s a likely draft pick in 2018 if he stays healthy. White threw 93 mph this summer with the South Charlotte Panthers showcase team.

North Rowan
No one had a better week than Victor Lyles, a North linebacker who made 16 tackles and picked off a pass in the exciting, 27-23 win against Statesville.
Javin Goodine, North’s all-county linebacker, was injured in that game, but Lyles stepped forward.
“Javin is our stud linebacker, but he had his thumbnail ripped right off,” North coach Ben Hampton said. “When he started losing feeling in his hand, he had to come out, but Victor came through with a huge game.”
•••
North defensive end Zion DeBose and nose Steven Thurston are regulars in the weekly notebook.
DeBose had two more tackles for loss and two pass knockdowns against Statesville. Thurston had 10 tackles and recovered a fumble.
Thurston also continues to help out at guard on the offensive line.
“I don’t know how anyone can play as hard as he does and still go both ways,” North quarterback Corbin Smith said. “But Steven has a special heart.”
•••
North’s running game punched out 149 tough yards for the Cavaliers (3-0) against Statesville, with blocking leaders including Terry Cathcart, who has overcome an ankle injury, and Taelor Davis.
Jaleel Webster continues to carry a lot of the load. He has 245 rushing yards.
“We were able to run it well enough that Statesville had to honor the run,” Hampton said. “That allowed us to make some plays throwing it.”
•••
DB Chris Clodfelter’s pick-six opened the scoring for North.
Clodfelter had five picks last season when he made the all-county first team.
•••
Webster’s kickoff return TD against Statesville gave North three of those rarities in its last four games.
Jaden Perry took one to the house against Carson and he also produced a KOR-TD in last season’s finale against Winston-Salem Carver.

Salisbury
The Hornets (1-2) have crippled themselves with eight turnovers in losses the last two weeks and they had four big ones in Friday’s 31-7 loss to Carson that could’ve been much closer.
•••
Senior linebacker Tywun Rivens led Salisbury in tackles last year and had a terrific game against Carson with double-digit stops.
•••
Junior linebacker Tevin Mullinax had a fumble recovery against Carson. That’s two weeks in a row he’s picked one up.
•••
Cameron Horne’s over-the-shoulder catch was the offensive highlight for Salisbury against Carson. QB Tyquan Jones put together a positive game with 124 yards rushing and passing.
•••
The bad news for the Hornets is they go to 4A Lake Norman on Friday.
Lake Norman has scored 48, 49 and 55 in the last three seasons against Salisbury.
That’s a non-conference opponent the Hornets won’t mind subtracting from the schedule when the Central Carolina Conference expands to 10 teams in 2017.
Salisbury will only have room on the slate for two non-conference games in 2017, and one of those is certain to be North Rowan. East Rowan, Carson and West Rowan are candidates to provide the other non-conference opponent.

South Rowan
South is coming off an open week, but there’s lingering optimism from two weeks ago when the Raiders (0-2) scored against A.L. Brown. South didn’t score against the Wonders last year.
There’s also some optimism about traveling to Northwest Cabarrus for the SPC opener. South won on its last visit to NWC in 2014 and had every opportunity to beat the Trojans in 2015 before losing, 35-34.
•••
The forfeit win that South picked up against Salisbury in the offseason was fortuitous.
On the field, the Raiders have lost 13 straight, one short of the longest skid in school history.
•••
Quarterback Austin Chrismon made strides between South’s first and second games. After throwing four interceptions against Salisbury, he had no picks against A.L. Brown.
South moved the ball against the Wonders on its first three possessions, and Chrismon threw a nice touchdown pass to Daevonne Harris.
•••
Assistant coach Jarrod Smith praised the play of right tackle Patrick Brooks (6-2, 215), and said he’s played really well in both of South’s early games.
Brooks is the son of long-time South assistant coach Jim Brooks.
•••
Defensively, Austin Hyde, an outside linebacker/strong safety, has been a pleasant surprise. The senior came out for football for the first time in several years and came through with an interception against A.L. Brown.
•••
Senior safety Brandon Briggs (5-9, 140) was South’s leader in tackles in 2015, and it looks like he’ll repeat that title.

East Rowan
Max Wall pushed his career rushing total to 2,933 yards in Thursday’s 39-20 loss to Concord and is on the verge of becoming the first 3,000-yard back in East history.
Wall has passed outstanding backs on the county’s all-time rushing list this season, including Cal Hayes Jr, East (2,698), Michael Ramseur, South (2,720), Dominique Dismuke, Salisbury (2,727), Greg Poole, South (2,772) and Bennie Geter, North (2,892).
Next on the list for Wall to surpass is Justin Ruffin, Salisbury (2,963).
•••
Senior cornerback Wesley Porter had a kickoff return of 83 yards for a touchdown against Concord. It was the third career TD for the senior, who also has scored on a reception and an interception return.
•••
Turnovers killed East last season, but the Mustangs (1-2) have been better in that department so far in 2016. East’s defense has come up with eight turnovers — and two defensive TDs.

West Rowan
Change is in the wind at West, where the 41-0 loss to Davie two weeks ago, the first shutout loss for the Falcons in 14 seasons, surprised everyone.
Coming off an open week, the Falcons (1-1) have had some time to regroup, and it won’t be a shock to see receiver-turned-quarterback Kortez Weeks playing some wideout this week to try to get the offense untracked.
Weeks is a Division I prospect as a receiver. The Falcons just have to find a way to get the ball to him.
•••
West’s loss to Davie could partly be attributed to punting issues, but West also couldn’t run the ball, with 30 rushing attempts for a meager 4 yards. So there are several things to fix.
•••
West fans can be encouraged by the program’s last response to a shutout loss.
After West lost to Mooresville, 35-0, in 2002, the Falcons came back the next week to beat East Rowan, 30-15.
•••
West will have an enormous preparation time advantage against talented Robinson, which beat Hickory Ridge for its third straight South Piedmont Conference win on Monday.
•••
West hasn’t lost a conference opener since it lost to Statesville in the NPC in 2012.

A.L. Brown
The Wonders stayed undefeated on Monday by steamrollng Northwest Cabarrus for 356 rushing yards in a 48-0 victory.
Six different backs put the ball in the end zone for the Wonders (3-0), and QB Zach Williamson had his best statistical game so far, with 122 passing yards and his first TD toss — to back Shymere Scott.
•••
Speaking of Scott, while his yards per carry look like a typographical error, the former defensive back really is averaging 17.1 yards per carry, with 13 attempts and 222 rushing yards.
•••
The Wonders’ defense logged its first shutout since blanking South Rowan early last season.
•••
The Wonders go to Mooresville for a Military Appreciation game on Friday.

Davie County
After two weeks of sunshine, a 32-6 setback against powerhouse Greensboro Dudley left Davie with injury concerns.
A hit to receiver Cooper Wall knocked him out of the game and led to him being hospitalized for tests and observation.
Wall, a junior who is one of the state’s best at his position, will return this season, but the timetable is uncertain. It is certain that he won’t play against North Rowan on Friday.
Davie QB Chris Reynolds’ status for the North game is also questionable.
Reynolds got banged up in the Dudley game and was noticeably limping.
While North’s defense will prepare this week to face Reynolds, there’s a chance he won’t suit up. Davie is going to need Reynolds to deal with the Central Piedmont Conference schedule, and the War Eagles may not want to risk injury in a non-conference game.
•••
Even if Davie (2-1) is minus its top two offensive players, it could still beat North with running back Peyton Hampton, a stout defense and a solid kicking game, and the Cavaliers are well aware of that.
“Those linebackers (James Boyle and Cody Hendrix are standouts) are active and they get downhill in a hurry,” North coach Ben Hampton said.
•••
Davie and North won’t be playing a jayvee game this week.