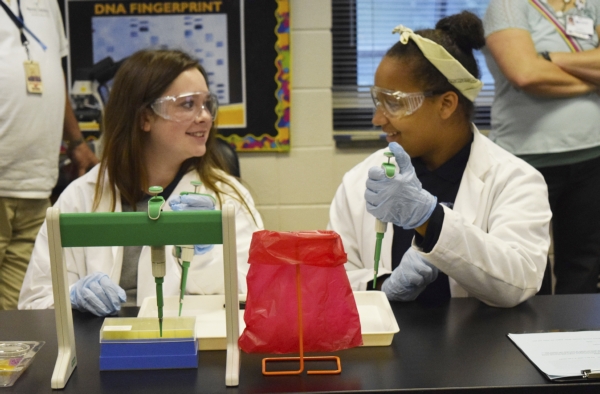 Madison Benton, left, and Malika Cornelius, right, use a pipette to test the anti-bacterial properties of honey during a lab at Horizons Unlimited. Rebecca Rider/Salisbury Post

SALISBURY — The new school year will bring some changes at Horizons Unlimited. Wednesday was the interactive center’s first day open to school programs, and eighth-graders from Erwin Middle School were already getting a taste of some modified programing.

Upstairs, lessons proceeded as usual as groups tested the antibacterial properties of honey or studied dinosaurs in the Margaret C. Woodson planetarium. But downstairs, a group discussed the ethics of Civil War prisons — a new track for Horizons.

Executive Director Amy Pruitt said that the center will try to incorporate other subjects like social studies, while embedding principals of math and science.

“We’re really trying to embed this relevant piece of, ‘Why would I need to learn this?’” Pruitt said.

The eighth-graders not only tackled questions of ethics, but also had to use math to determine daily rations for prisoners.

Horizons is also stretching the day and giving students more time with each experience. Each section Wednesday morning lasted 45 minutes, and the students spent the entire day at Horizons cycling from station to station.

“Everything we do in this space is about student experiences,” Pruitt said.

While it’s operated by Rowan-Salisbury School System, Horizons is an important part of the community, as well. Periodically the learning center would open its doors to the public, inviting them in for a program or a night at the planetarium. This year, Pruitt said, those opportunities will increase.

A new schedule this year means that Horizons will soon be open to the community on Tuesday evenings from 4 p.m. to 6 p.m. while school is in session. Pruitt said planetarium programs and hands-on activities will be planned. The programming and arrangements for Tuesday openings are still in the works, but the center will also be open to the public on the third Saturday of every month.

Pruitt said the additional days came after several families asked if there was anything happening during the week.

“We try to listen to feedback,” she said.

A few rooms in Horizons have also changed — the old health room is now a maker space with tools fit for tinkering.

“It was kind of underutilized space,” Pruitt explained.

The back room now features a 3-D printer, tools and craft supplies to let students and families take things apart, explore and create. While each maker space tends to have its own personality, the one at Horizons can morph and shift to meet the needs of its users.

Pruit said Horizons is also in the process of looking for funding to renovate the center’s “animal room” to make it more hands-on and up close and personal.

Horizons Unlimited events commonly have donations-accepted entry, and Pruitt said she wants to get the word out about the new schedule.

“I want the community to know that this place is here for learning,” she said.