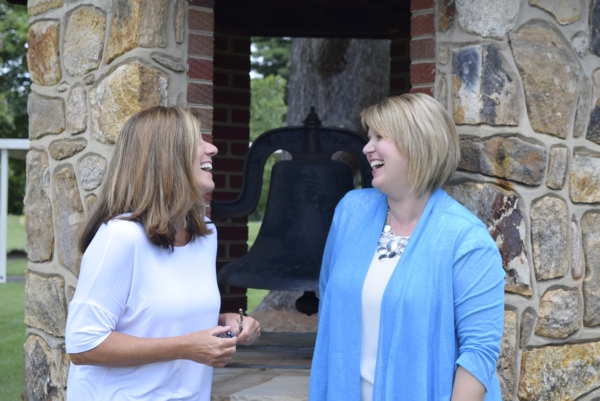 Jennifer Warden, right, was Tammy McNeely's, left, first student teacher. This year, Warden took over as the principal at Rockwell Elementary, where McNeely still teaches. The two still get along. Rebecca Rider/Salisbury Post

ROCKWELL — For Jennifer Warden, becoming the principal of Rockwell Elementary means returning to her roots.

“Everywhere I go, every time I see someone, all I hear is, ‘Welcome home,’” she said.

Nearly 20 years ago, Warden stepped into the school as a student teacher, working with fourth-graders from August to December of 1997 under the sharp eye of Tammy McNeely. Mcneely, who now teaches second grade at Rockwell, said that at the time Warden struck her as young and innocent, but she proved to be a capable teacher.

“It makes me very proud to think that she’s come this far,” McNeely said.

Warden remembers that she was nervous about teaching fourth grade — she’d originally planned to student teach with a younger grade, but moved to study under McNeely when the arrangement fell through. But despite her fears, Warden’s entry to fourth grade was “seamless.”

“I just clicked with the grade level,” she said.

So much so that when Warden was offered a job teaching fourth grade at the school in January, 1998, she took it. In a way, that itself was coming full circle for Warden, who had also attended Rockwell Elementary as a student.

But at the time, it was the start of a career — and a life. During her time at Rockwell, first as a student teacher, then a fourth grade teacher and finally a second grade teacher, the school’s staff saw her get married and have her first child. And they threw her a celebration for each.

“They saw me go through those beginning stages of your life,” Warden said, remembering.

McNeely’s daughter was even a flower girl in Warden’s wedding.

And it was the old administrative team at Rockwell Elementary, headed by then-principal Dr. Bill Schnuit, who encouraged Warden to become an administrator herself. Warden recalls that she often came to them with concerns, wanting to do something to benefit the school as a whole.

“They pushed me to step out of my box,” she said.

Now, she’s said she’s “humbled” to take over the work they did, and to lead the school that gave her a leg up.

Warden eventually left the school, moving to be a teacher at Millbridge, and then an assistant principal at Mount Ulla Elementary before serving as the school’s principal. Warden said she always told people that the only school that would make her leave Mount Ulla was Rockwell.

And when the position came open after the previous principal, Laura Bardill, retired, Warden jumped at the chance. Leading the school allowed her to return to a place she loved and to work in the community in which she lives.

McNeely has been teaching at Rockwell for 25 years now and has had other student teachers since Warden. But the two kept contact. When Warden was selected to take the helm at Rockwell, McNeely said veteran staff kept dropping by her room and asked, “’You do know who’s coming back?’”

At first McNeely said that she was worried that the move would affect the good relationship the two had built over the years — but now those worries are mostly gone.

And Warden said it’s comforting to know that her old mentor is still teaching at the school. She still feels like she can go to McNeely for advice or to chat.

Now, when Warden roams the halls of Rockwell, she said she sees the past. The walls are white with stripes in the school colors, but Warden can still point out the eight classrooms that had doors painted like lighthouses. She can still remember which teacher taught in which classroom — even though many have retired, or moved to other schools.

And she can still remember where the old library and cafeteria were, from when she was a student. But she’s noticing new things, as well. As a teacher, Warden said she was focused almost entirely on her classroom — now it’s her job to know the school inside and out.

“I look at it with different eyes,” she said.

Warden fell in love with Rockwell as a teacher, and said that now that she’s back, she doesn’t plan on leaving.