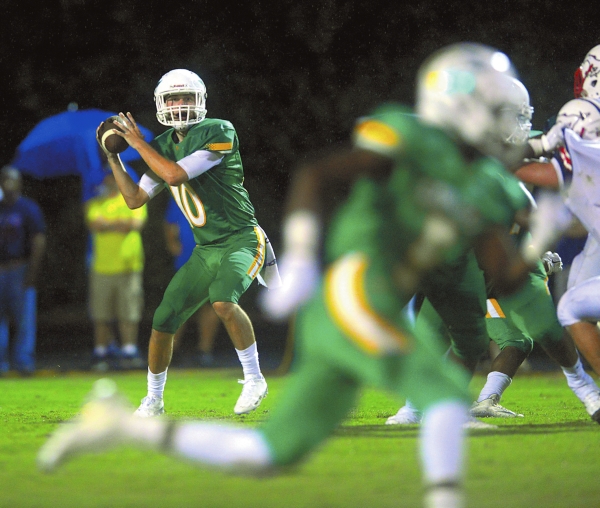 SPENCER — North Rowan quarterback Corbin Smith is still listed at 6-foot-2, same as last year, but there’s been some serious growth.
“My confidence level has gone up and my maturity level also has gone up some,” said Smith, who led the Cavaliers to their third straight win on Friday, a 27-23 comeback against Statesville.
There’s been a huge difference between the 2015 version of Smith and the 2016 version. It’s like the Cavaliers traded Tom Hanks for Tom Brady in the offseason.
As a junior, Smith was sometimes the starter, sometimes split time with Josh Ellis, who has moved to defensive back, and sometimes served as Ellis’ backup. Smith rushed for minus yardage and completed 39 percent of his passes for 765 yards and three touchdowns.
As a senior, the completion percentage is right at 50, and Smith has 389 passing yards and five touchdowns in the books after three weeks. He’s also rushed for 78 yards, including a 38-yard TD dash against Carson.
“Corbin is an extremely intelligent guy who watches a lot of film and he’s been in the system for four years,” North Rowan head coach Ben Hampton said. “He can make all the reads, and he can throw the football. There’s room for him to play better than he has, but he’s done a lot of growing up.”
The Statesville game was a stern test for the Cavaliers, the SAT after two weeks of pop quizzes.
North led 13-0 at the outset, but the Greyhounds grabbed a 23-19 advantage early in the fourth quarter and still held that lead when the Cavaliers got the ball for the last time with four minutes left.
“We hadn’t been able to do very much on offense, but our defense had played great and held us in the game,” Smith said. “We still had confidence that we could put a game-winning drive together. We just had to keep our heads.”
The pivotal play was Smith’s pass to Dakerius Hoosier, the much smaller, older brother of North defensive line stud Matthew Hoosier.
North lined up with three receivers to Smith’s left, with Hoosier on the outside.
Hoosier roared across the middle on a slant, and Smith delivered the ball to him in stride 25 yards downfield. Hoosier’s churning legs took the ball inside the Statesville 15 for a gain of nearly 50 yards.
What made that key play happen was Smith calmly waiting an extra heartbeat to let Hoosier come open.
“That play had been there for us, but I’d been rushing it,” Smith said. “That time I set back. I let the route develop, and Hoosier made a big play.”
North has a lot of seniors who have been playing together for many years, and that play gave them the lift they needed to finish the job. With under a minute left, Smith threw a short touchdown pass to Desmond Gray for the lead and the eventual win.
“We won it with a play that we haven’t had a great success rate on in practice,” Hampton said with a chuckle.
It was a well-designed play from the 4-yard line, with Gray starting in motion to his left, and then pivoting, and coming back to his right. The two receivers lined up on the right ran inside and all of the Statesville defenders in the area went with them. That left Smith with an easy flip to Gray for the six points — and he executed it.
“The guys cleared that side out, just the way it was supposed to work,” Smith said. “Desmond was wide open.”
That simple play concluded a game-on-the-line drive North would not have executed a year ago when it went 5-7. No way that Smith hangs in the pocket and makes that critical pass to Hoosier a year ago.
“Every quarterback throws some interceptions,” Hampton said. “The important thing is having the ability to bounce back from interceptions. Corbin threw two interceptions Friday. A year ago that would have taken him out of the game mentally. This time he put in behind him and he took us down the field.”
Smith is one of the sharpest students in North’s senior class, and he was the starting second baseman for a Central Carolina Conference championship baseball team.
Now he has a chance to be a key part of a CCC championship football team.