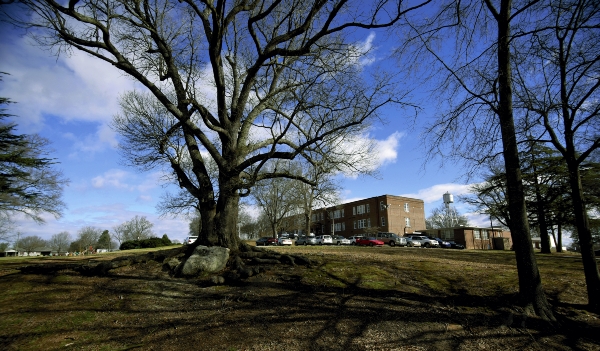 This hundred-year-old tree near Woodleaf Elementary School was a favorite place for children to play during recess many decades ago and could become part of a community park. JON C. LAKEY/SALISBURY POST

SALISBURY — What will happen to Woodleaf Elementary School once it’s vacated? County commissioners may have the answer.

During a commissioners meeting on Tuesday, Vice Chairman Jim Greene raised the possibility that the Woodleaf Elementary School site could be converted into a park once students and teachers vacate the facility as a result of school consolidation. A Woodleaf community park would fill a need identified in Rowan County’s parks master plan, which was presented publicly for the first time on Tuesday.

To give equal access to parks to all Rowan residents, parks are needed in the northwestern and southern portions of the county, according to the county’s master plan. Overall, the master plan says Rowan needs an additional 142 acres of park land.

Greene, a resident of Cleveland and member of the county’s parks board, said Woodleaf Elementary School has been the center of the community for years. A park might serve a similar function, he said.

“That particular school has just been invaluable for the community itself as most schools are, especially for our unincorporated areas,” Greene said during Tuesday’s meeting. “We were thinking that this might be a good alternative to what’s happening to them up there. It would give them something back.”

No particular area idea or park site was discussed during Tuesday for a county park in southern Rowan. The swath of land identified as needing a park forms a triangular shape that stretches from Gold Hill historic park in the east to the Kannapolis Intimidators’ stadium in the west and the southern edge of Salisbury at the northern end.

The county’s parks master plan did not take any municipal parks into consideration as a determining factor in where new parks might be required.

It’s unclear when the Woodleaf park idea might come to fruition, but it may be closer than other ideas mentioned in the county’s master plan. The Rowan-Salisbury School System has argued over the best site, but is nearing construction of a new, consolidated elementary school. As a result, schools in Cleveland and Woodleaf would be vacated.

Once the sites are vacant, county commissioners would have a “right of first refusal” — the ability to claim the property before it’s sold to a third party.

“With the consolidation of the schools, I would like for us to give back something that would allow them to have a central meeting place or activity area for children and for other people, citizens, in the community,” Greene said after Tuesday’s meeting.

Rowan County’s parks plan contains a wide array of other park-related ideas, including a public swimming area on High Rock Lake, a dog park at Dan Nicholas and a rock climbing course at Dunn’s Mountain. It wasn’t explicitly mentioned, but the parks master plan also raised the possibility of athletic facilities being placed in West End Plaza to serve participants in the Rowan County Senior Games.

Noting some of the master plan survey findings, Commissioner Mike Caskey raised the possibility that Rowan County could operate a public shooting range at a park facility. The survey included responses from 400 people and found that respondents had a significant interest in shooting sports.

After Tuesday’s meeting, County Commissioners Chairman Greg Edds said it’s possible that commissioners could begin to tackle goals in the parks master plan as early as next fiscal year, which begins on July 1, 2017.

Commissioners unanimously approved the parks master plan — assembled by the Charlotte-based John R. McAdams Company. Within five years, it recommends that Rowan County develop a volunteer program for parks, create a pricing policy for its parks programs, produce an individual master plan for each park, acquire enough land to create 10 miles of greenway trails and finalize local plans for the Carolina Thread Trail.

During the meeting, Edds stressed that commissioners’ approval of the master plan didn’t mean new park facilities would be built immediately.

“This does not mean that we’re going to go out and do all these things,” he said. “It means that we’re adopting this plan over time as interest and funds allow, and we will use this as a roadmap to do things that have been set forth in this plan.”

Murder suspect’s mother: “My son was just trying to…