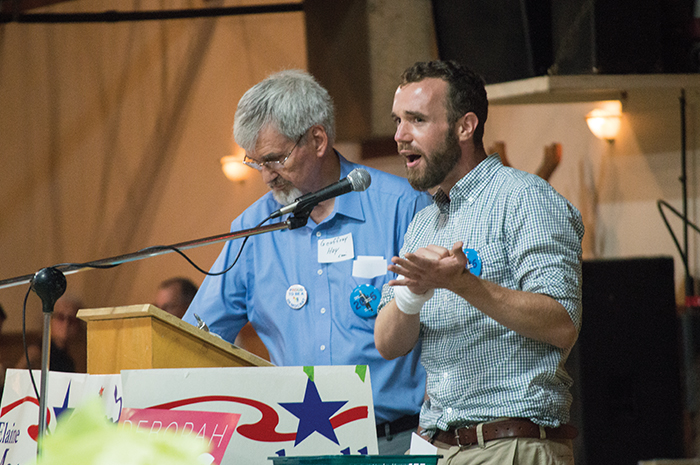 Josh Bergeron / Salisbury Post - James Harvey, working in Rowan County as part of the Democrats' coordinated campaign, speaks to the local party on during the party's annual picnic event at Shoaf's Wagon Wheel.

It’s a goal that would be unprecedented and, perhaps, unlikely.

Since at least 1998, Rowan County has also consistently picked Republican candidates in races for president, governor and U.S. Senate.

With Trump leading the Republican Party, however, Democrats hope they can reverse the decades-long trend.

“I think the effect of Mr. Trump’s candidacy is that it’s motivating Democrat volunteers to come out and work,” said Rowan County Democratic Party Chairman Geoffrey Hoy. “We have been excited by the volunteer response and by the response to voter registration events and the enthusiasm for our candidates.”

Local Democrats have also seized on issues such as potential coal ash contamination in Dukeville as a motivating factor for November’s gubernatorial race.

Charlotte Mayor Jennifer Roberts spoke during local party’s annual picnic and encouraged Democrats to change the trend. She spoke during the event as a surrogate for the Clinton campaign.

“We have to be excited. We have to make sure we turn out in every single county, and counties like Rowan are really going to make a huge difference,” Roberts said. “There are some places that Republicans think they’ve already got sewn up. They’re not paying attention.”

In Rowan, much of the work is being led by the Democratic Party’s coordinated campaign — an arm of Clinton’s campaign that aims to help with local organization and get down-ballot candidates elected. The coordinated campaign has picked two local residents to run the local arm of the campaign, which has registered an estimated 400 to 500 people to vote in the past few weeks.

Hoy and Clinton campaign staff at the state level declined to talk about how many people the campaign has registered in Rowan.

“We don’t want the Republicans to know exactly how well we are doing,” Hoy said.

Democrats aren’t the only ones trying to increase their odds of winning in November. Both local parties have opened party headquarters for the 2016 election and have hosted organizing events.

Unlike the Clinton campaign, Trump doesn’t have a local presence in Rowan. It’s a similar story statewide. Trump has staff in the state but hasn’t opened his own offices. By comparison, Clinton has 30 coordinated campaign offices.

“Hillary for North Carolina has staff and volunteers in every region of the state and 30 coordinated campaign offices, where they are leading volunteers who are going door to door in their communities, phone banking, and engaging on social media,” said Clinton campaign spokesman Michael Gwin.

When asked about local organizing efforts, Trump State Director Jason Simmons said the campaign “absolutely has every intention” of opening offices throughout North Carolina. Trump’s campaign, however, has leaned more heavily on the Republican Party in its organizing efforts than past candidates.

The North Carolina Republican Party’s effort is called NC Boots. Carter says the party first placed paid staff “on the ground” in North Carolina in 2013 as part of NC Boots. It helped get Sen. Thom Tillis elected in 2014 as a sort of test run. Carter said NC Boots was designed for any presidential candidate to step into.

“You can’t just parachute into a state several weeks before an election and be successful,” she said.

Republicans at the state level who spoke to the Salisbury Post touted the number of rallies held by Trump as a “personal touch.” The organizing efforts — “ground game” —that occur outside of rallies are the most efficient and effective ever, Republicans say.

Across North Carolina, Democrats tout the large difference in physical offices between Trump and Clinton. In Rowan County, the matchup is relatively even. Democrats opened a headquarters on West Innes Street on Saturday. Coordinated campaign staff have used 10Thread on South Fulton Street, but will work out of the West Innes office. Republicans have for several weeks operated a headquarters out of a building on North Main Street.

Organizing efforts may set the stage for November. Ultimately, however, voter turnout matters — a fact that Salisbury resident Kweta Dolo has tried to stress to people she has encountered.

Dolo is originally from Liberia, a country in Africa. She moved from New York to Salisbury a number of years ago. Lately, she has volunteered to help register voters during events organize by the Democratic Party’s coordinated campaign.

“People say, ‘If I do vote, what difference does it make?'” One vote does count and people should be involved in the process,” Dolo said. “I ask people, ‘Have you read the Constitution? Voting is part of being an American. You have the right to vote.'”

Dolo says she plans to vote for Clinton in November. Dolo says that Trump’s past actions and statements aren’t examples of leadership.

Local business owner Evelyn Medina is an unaffiliated voter and has previously helped with campaign organizing efforts but says she hasn’t been involved much this year. She has also decided that Trump isn’t the candidate she prefers.

“I just think this country, this state and this county are too smart to vote for Trump,” she said.

In the most recent presidential election, North Carolina narrowly favored Republican nominee Mitt Romney over President Obama, after giving Obama the majority of its votes in 2008. Meanwhile, Rowan stuck to its Republican history in 2012, picking Romney by a notable margin. Salisbury represents Rowan’s largest concentration of Democrats. In 2012 the city and some neighboring precincts picked Obama instead of Romney.

The southern portion of Rowan, a majority Republican area, holds most of the county’s voters. If Democrats hope to turn the county blue, they may have to lure Republicans to vote for a Democrat.

When asked about that task, Hoy didn’t say much but welcomed Republicans “to join us.”