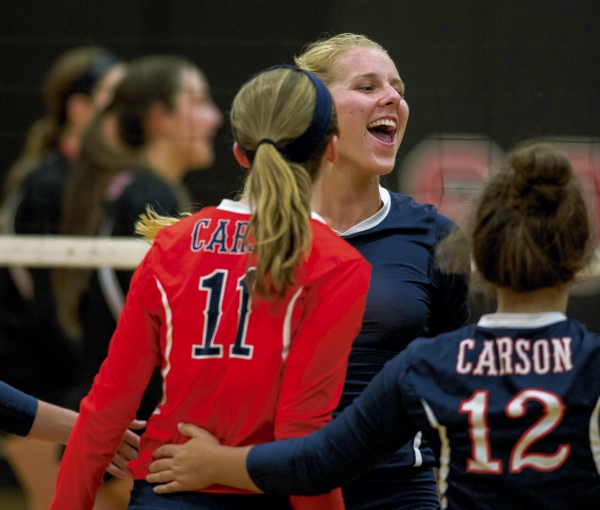 LANDIS — When Carson senior middle hitter Elena Turnbull is jump-serving, it can be unnerving.
Turnbull racked up 10 aces on Tuesday as undefeated Carson swept South Rowan, 25-15, 25-16 and 25-17 in South Piedmont Conference action.
“I was serving pretty well,” Turnbull said. “It helped us get on some good runs and to get some comfort with our leads.”
Turnbull’s forceful serves were instrumental in Carson zooming to an 8-0 lead in the second set and a 4-0 advantage in the third set.
“We got off to some strong starts because we were serving so many aces,” Carson sophomore outside hitter Mallory Weast said. “Elena was really good.”
With Janiya Downs and Hannah Lambert getting three kills apiece in the first set, South (6-3, 2-3 SPC) stayed in it a long time. Carson (8-0, 5-0) got five early kills from Madison Barnhardt, but its lead was only 18-14 when South finally wilted with a missed serve followed by a miscommunication. After an ace by Lindsay Elmore, Carson was headed for victory. Turnbull finished things off on a nice set by Chloe Jacobs.
“In that first set, South Rowan played well,” Carson coach Kelan Rogers said. “They earned 12 of their points in that set with good plays. After that first set, we gave them more and more. They got a lot of their points off our mistakes.”
Turnbull started the second set with four straight serves that were not returnable, and it was 8-0 before South finally got her off the service line.
“Elena is an awesome server,” said Lambert, one of South’s senior co-captains. “But the biggest thing today was we needed to cut down on our errors. We came out strong at the start of this season, stronger than anyone expected, and we know we can do better than we did today.”
South made a comeback from 8-0, getting as close as 8-7 on a block by Breanna Lentz, the other senior co-captain, but Jacobs started looking for the springy Weast, who had five kills in the set, and the Cougars pulled away.
Lentz had three kills, a block and an ace in that set.
“But we were kind of killing ourselves all day,” South coach Jenna Horne said. “We didn’t play one of our better matches. We didn’t pass very well and we didn’t play defense very well.”
Weast’s right arm stayed warm in the final set with five more kills, and Turnbull added three.
South came back from that early Turnbull-fueled, 4-0 deficit and sliced Carson’s lead to 6-5 on a kill by Downs, but Carson quickly pushed the lead back to 11-6.
Weast soared and put away a set by Jacobs to the end the set and the match.
“It was a long weekend, so it was like playing on a Monday and I hate Monday matches,” Rogers said. “I’m not really pleased with how we played because we gave up four, five, six points to one server several times, and that just can’t happen.”
The good news for the Cougars is that they’re good enough to learn lessons — and still win while they’re doing it.
“I thought our hitting was good,” said Weast when asked to analyze Carson’s performance. “But our passing was a little off today. And give South credit. They were a scrappy team.”
Turnbull, a nationally ranked sand volleyball player, can turn it up a notch and take over when things are a little off for some of her teammates. That’s what she did on Tuesday.
“I thought we did OK,” Turnbull said. “We were talking well, but we made too many mistakes. We know we’ve got things we need to polish up.”
•••
NOTES: South setter Kira Rymer had 12 assists. Jenna Strickland led the Raiders with 10 digs. … South plays at West Davidson today. … Carson hosts Concord in SPC action on Thursday, while South is at Central Cabarrus.